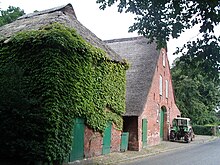 The Land Wursten ( Lower German Land Wussen ) is a historic landscape between Bremerhaven and Cuxhaven . During the Middle Ages it formed the easternmost landscape of the free Frisian "Zealand" . Today it forms, together with the neighboring country of Hadeln and the respective hinterland, a typical, relatively closed cultural area within the district of Cuxhaven .

The name is derived from the Low German term Wurtsassen or Wursaten , which means "Wurten residents". Wurten are artificial settlement mounds that provided the only protection for people and cattle from floods and storm surges until dikes were built in the marshland on the North Sea coast . After the name had been just a landscape designation for a long time, it was back in official usage from 1974 to 2015 as the joint municipality of Land Wursten .

Sea dike at Imsum, with a view of the port facilities of Bremerhaven

The Land Wursten is a marsh bordered in the west by the North Sea and in the east by the Hohen Lieth , a Geestrücken . The area is traditionally agricultural. Today, grassland farming with dairy farming dominates. The bed structure of many agricultural areas shows, however, that earlier (until the middle of the 19th century) a lot of arable farming was practiced here. The Hohe Lieth, or Wurster Heide, is formed from meltwater deposits and sediment loam from the Pleistocene Saale glacial period . On the edge of the Geest are the places Midlum , Holßel , Sievern and Langen .

The land is drained by several natural and artificial watercourses, whose mouths into the Weser are secured with sluices . There are the typical, small fishing ports (lows) of Spieka , Dorum , and Wremen . The cutters mainly fish for crabs and plaice in the extensive mudflats off the coast. The most important source of income, however, is seaside resort tourism .

The Wurster Watt is part of the Lower Saxony Wadden Sea National Park . 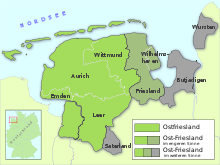 As the extensive archaeological excavations in the Wurtensiedlung Feddersen Wierde show, the eastern mouth of the Weser originally belonged to the old Saxon settlement area. The area was not settled by Frisians until the beginning of the 8th century . The first Christian missionaries came with Willehad , the first bishop of Bremen. But only since the baptism of Duke Widukind in 785 did they achieve greater success.

After the end of the Viking invasions, there were increasing signs from the 11th century that the country of Wursten was becoming independent. Neither the archbishops of Bremen nor the Ascanian dukes of Saxony-Lauenburg , to whom the neighboring state of Hadeln had paid homage, could effectively enforce their claims on the land of Wursten. Instead, the Frisian population not only took the dike and reclamation of the land into their own hands, but also the administration and jurisdiction. Up until the High Middle Ages, the country of Wursten claimed the right of Frisian freedom as a peasant republic and sent its representatives to the annual Thing at the Upstalsboom near Aurich .

In the 13th century the Wurtfriesen finally succeeded in ousting the last remaining feudal lords from their territory. The Lords of Bederkesa, who feuded with the land of Wursten to enforce their jurisdiction, were repulsed in 1256 with heavy losses. A monastery founded by the Lords of Diepholz, who owned larger estates near Midlum, had to be relocated outside the country in 1282. Later recognitions of the sovereignty of the dukes of Saxony-Lauenburg or the archbishops of Bremen by the judges and Schulzen of the state of Wursten were little more than formal lip service. However, in 1310 the provost of Hadeln-Wursten was able to seize the important right to elect a pastor, which had previously been held by the “16 advisors” of the Wurster parishes.

In the course of the 14th century, the up-and-coming Hanseatic cities of Hamburg and Bremen allied themselves in their feuds with the local feudal lords, such as the Lords of Bederkesa or the Lappes in Ritzebüttel (today Cuxhaven ), often with the warlike Wurtfriesen. While in other parts of Friesland local chief families were already seizing power, in the country of Wursten the self-government of the 16 advisors remained largely intact.

Submission of the country sausages

It wasn't until 1444 that the country's star began to decline. At that time, the whole of Wursten was banned from church by the archbishop for seven years for robbing the beach on Hamburg property . In the second half of the 15th century there were several clashes between the Wurtfriesen and the now Hamburg occupation of Ritzebüttel Castle . The Ascanian Duke Johann IV of Saxony-Lauenburg also remembered his old claims on the land. His hasty attempt at conquest, however, was vigorously refused by the Wursters in 1484.

At the end of the century, however, the Wurtfriesen got caught between all fronts of the rising territorial rulers. Both Duke Magnus von Sachsen-Lauenburg , as well as Count Johann von Oldenburg, as well as the council of the city of Bremen tried to expand their influence on the land of Wursten. In this delicate situation, the 16 advisors turned to Archbishop Johann Rohde for help and accepted his supremacy. At the end of 1499 Duke Magnus dared an invasion, but suffered a surprising defeat at Weddewarden .

However, the warlike successor Johann Rohdes, Archbishop Christoph , did not think at all of being satisfied with this moderate type of rule over the land of Wursten. In December 1517 he sent an enormous mercenary army into the country. After vigorous but futile resistance, the Wurster were defeated in the battle of the Wremer Tief . The flag maid Tjede Peckes was also killed in this battle . Under pressure from the archbishop's excessive demands, however, an uprising broke out the following year, which quickly spread to the neighboring areas of the archbishopric. Then the Wursters ran over to their former opponent, Duke Magnus.

It was not until 1524 that the archbishop was able to collect enough soldiers to recapture sausages. In the decisive battle in the churchyard of Mulsum, the Wurster were finally defeated. The land was looted and devastated. A half-hearted counterattack by Duke Magnus failed. The archbishop completely eliminated the previous self-government and the constitution, and from now on the land of Wursten was an integral part of the archbishopric. Because of his constant financial need, the aged Archbishop Christoph had the land of Wursten plundered again in 1557. 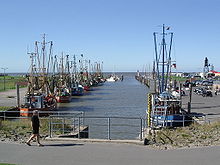 Despite the loss of their political independence, the Wurster farmers soon regained prosperity. The number of small sluice ports , which because of the treacherous waters in the Weser estuary, could hardly be controlled by those unfamiliar with the area, continued to prove to be an advantage for the country. In the 70s of the 16th century the privateer Hans Abels from Misselwarden gained wealth and reputation in this way .

During the Thirty Years' War , the Wurster and the Hadlers occasionally fought against the Imperialists. The last (Protestant) archbishops, however, tried mostly successfully to keep the archbishopric out of the armed conflicts. After the Peace of Westphalia in 1648, the diocese of Bremen was secularized and fell to Sweden. Subsequently, the region was drawn into the long-lasting conflicts between Denmark and Sweden over hegemony in Northern Europe ( Nordic Wars ).

In 1719, the state of Wursten, together with the Duchy of Bremen-Verden , became the property of Hanover and subsequently shared the eventful fate of Kur-Hanover. During the Napoleonic occupation of northern Germany and the trade blockade against Great Britain (the so-called continental barrier ) from 1806 to 1813, the small sewage ports in the Wursten region were used extensively by smugglers . After the fall of the French army in Russia, the Wursters also took part in the uprisings against the occupiers and drove the French customs officers and gendarmes from Dorum.

After the German War , the Kingdom of Hanover became the Prussian Province of Hanover . 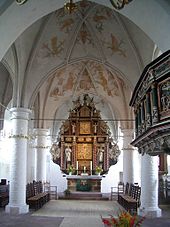 Hall choir and altar of St. Urbanus Church in Dorum

Sausage is historically a part of Friesland . Like most other East Frisian dialects , the old Wurtfriesen language has long since died out. However, the Wurster Frisian was able to hold up for a relatively long time, remnants of this peculiar dialect were recorded as late as the end of the 17th century. Frisian was replaced by Low German dialects, which are still spoken today. Wursten is represented in the international Frisian Council in the East section.

As the following mocking verse of the 18th century shows, the Wurster Frisians were considered proud and hard-drinking by their neighbors.

(Roof and gable open,
drunk day and night,
a large coat of arms on the house,
so you can meet the Wurster.)

In addition, their warlike past had earned them a certain reputation as brawlers. In contrast to the above allusion, the churches and the prosperous marshlands were in no way inferior to those in other marshland areas. The farmhouses usually show the floor plan of the Low German hall house . Mixed forms with Frisian house forms are rare. Unlike in the Land of Hadeln or in the Stadland , half-timbered gables are already very rare. Instead, the houses are usually made entirely of brick. 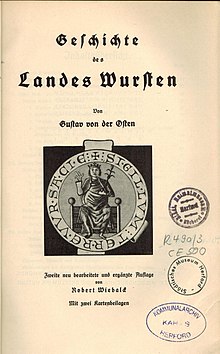 Title page of the second edition on the history of the country Wursten ;
by Gustav von der Osten and Robert Wiebalck