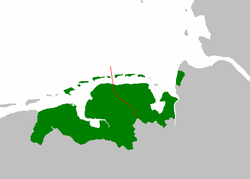 Already in the old Frisian times the river Lauwers in today's Netherlands was considered as a dialect divide between the West and East Lauwers dialects of the Frisian language. The old Frisian known today is handed down in written documents from around 1200 to around 1550. For the period before that, around 500 onwards, there are only a few sources, such as runic inscriptions or individual words in legal sources such as the Lex Frisionum of Charlemagne. But even this body of law distinguishes between the areas on both sides of the Lauwers. This distinction was also reflected in the dialects at that time.

Likewise, already the two language groups within the ostlauwersschen language area formed out between the 8th and the 11th century: the emsfriesischen and the Weser Frisian dialects. Ems Frisian was spoken roughly in the Ommelanden , Emsgau and Brokmerland , i.e. in most of the areas of today's province of Groningen and in the western part of the East Frisian peninsula. Saterland was added later. Weser Frisian was spoken in Rüstringen and adjacent areas, i.e. the eastern part of today's East Frisian peninsula, in Butjadingen and later in the country of Wursten and other areas that were later settled. The so-called Brokmerbrief , an old source of law from Brokmerland, is probably the best known historical testimony to East Frisian .

Between about 1400 and 1550 , the Frisian language was replaced by the Dutch or Low German language in the entire Friesland between Vlie and Weser, i.e. both the western and eastern Lauwers areas . East of the Lauwers, this was the prelude or at least an important fixed point of the process, which in hairdressing is usually called “ontfriesing”. Because of its frisocentric view, this term is often criticized, one chooses instead a term such as "Verniederdeutschung". West of the Lauwers, however, the Frisian vernacular remained largely unaffected by this process.

In the Frisian Ommelanden, the process of “frieze removal” can be observed very early, as early as the first quarter of the 15th century the otherwise conservative linguistic legal texts were written there in Low German. However, how the abandonment of the old Frisian language and the turning to Low German in the spoken language took place is difficult to understand today. Frequently Frisian or a language interspersed with strong Frisian relics was attested until the last third of the 15th century, and occasionally until the 16th century. Nevertheless, no dialect from the dialects of the Ommelande made it into the New East Frisian period. Not long after the loss of the Frisian language, the Frisians of the Ommelande also lost their Frisian identity in the course of the formation of the province of Groningen.

In today's East Friesland , that is, in the territories of the county of East Friesland (from 1464) and the Frisian countries that later belonged to Oldenburg, the "de-frishness" proceeded similarly, but more slowly than in the Ommelanden. The Frisian identity also remained unaffected. The reason for this can only be speculated because of the limited number of sources, but here, too, it can be assumed that after the East Frisian written language was replaced, Frisian remained the vernacular for a while, and in some remote areas even for a long time and in some cases up to the present day . In the 15th century, the upper class and the cities were likely to have completely converted to Low German, and the farmers in the countryside followed later.

A real tradition of New East Frisian did not begin until the old language had already become something extraordinary. Older evidence of East Frisian (individual words and word groups, especially in field names) from all areas of East Frisia can be found in the three-volume East Frisian document book, which was edited by E. Friedländer and G. Möhlmann, z. B. Vol. I, No. 588 of 1447. In 1568 Minnert Focken died in Heppens , the last Frisian preaching pastor in Jeverland , in Upgant a Frisian wedding poem was written by Imel Agena in 1632, in Harlingerland in 1691 the foreign pastor Johannes drew Cadovius Müller in the Memoriale linguae Frisicae the Frisian language that still exists there, which is already strongly influenced by Low German, in dictionaries and text examples. In the country of Wursten east of the Weser, a dictionary of the local East Frisian was compiled by Pastor L. Westing (Luderus or Lüder Westing) in 1688.

Around 1700, East Frisian will probably only have been mastered by a few elderly people in the northeastern part of the East Frisian peninsula, especially in the Harlingerland. Even on the other side of the Weser, in the heavily isolated Wursten, the local dialect will no longer have been passed on to the next generation from 1720 onwards. By 1800 Frisian had disappeared so permanently that only a few decades later the linguist Heinrich Georg Ehrentraut found the Jeverlanders no longer even aware that Frisian had once been their language.

The only exceptions were the two Oldenburg communities of Saterland and Wangerooge , in which the East Frisian dialects were still alive. Wangerooge, the only North Sea island in Oldenburg, and Saterland, a difficult-to-access island in the moor, had retained their language because of their remoteness. However, storm surges in 1854 sealed the fate of the Wangerooger Frisian. After major destruction on the island, most of the Wangerooger were resettled to Varel and not taken into account when the island was later repopulated. The last Wangeroog language frieze died in 1950 in Varel (Neu-Wangerooge settlement). The Weser Frisian dialect group died out. So today only Sater Frisian is alive.

Apart from the still living Sater Frisian, the classification of the New East Frisian dialects is based on isolated written records and does not claim to be complete.

The Ems-Frisian and Weser-Frisian dialect groups differ partly lexically and phonemically. Traces of this distinction can still be found today in the East Frisian town of Platt. Weser Frisian was an extraordinary dialect group in various ways. For example, there are geminated consonants and special accentuations in short-stemmed words up to an almost polished stem syllable in Wurster Frisian.

In general, the Ostlauwerssche Frisian was considered the most conservative Frisian language in terms of the vowel phoneme inventory .

The East Frisian language is only spoken by around 2000 people in Saterland today. In the formerly Frisian-speaking areas, field names are often still of Frisian origin.