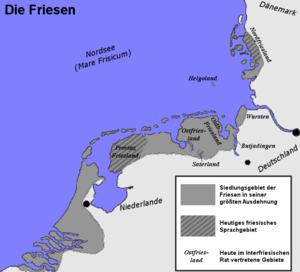 The distribution area of ​​the Frisian

The Frisian languages , generally just Frisian (West Frisian Frysk , Sater Frisian Fräisk , North Frisian Friisk , fresk , freesk , frasch , fräisch , freesch ) are a group of three languages. They belong to the North Sea Germanic branch of the West Germanic languages . Frisian was originally widespread on the North Sea coast between the Rhine and Elbe estuaries and later also north of the Eider estuary as far as the Wiedau (see map). Today it is still spoken by around 400,000 people, mainly in the Netherlands .

From the years from around 500 to around 1200, only a few Frisian runic inscriptions and individual words within Latin texts are known. Complete texts have only been passed on since the 13th century. The language level from this time to the 16th century is known as Old Frisian and is roughly in the same epoch as Middle Dutch , Middle and partly also Early New High German and early Middle Low German .

Modern Frisian originated from the 16th century and is divided into three main groups. In linguistics it is controversial whether the three main Frisian groups “only” form dialects of one language. Today, however, the three remaining successors are no longer understandable among each other and are viewed as different languages .

North Frisian is still spoken in parts of the district of North Friesland and on Heligoland in Schleswig-Holstein . On the islands and the mainland there are still nine different North Frisian dialects, some of which are difficult to understand. Of the approximately 164,000 inhabitants of the Nordfriesland district, around 10,000 still speak North Frisian. In the Endangered Languages ​​in Europe Report, North Frisian is classified as seriously endangered , as it is only passed on to the younger generation in a few places, especially in the north and center of the island of Amrum and in the west of the island of Föhr is passed on.

As a cross-dialect North Frisian name of the language, friisk has become naturalized.

In the former East Frisian language area between the Lauwers and Weser rivers (especially East Frisia , the province of Groningen and northern Oldenburg ), the Frisian language has almost completely died out. Since around 1400, East Frisian has been gradually replaced by various Low German dialects - and more recently by High German . The Wangeroog Frisian was last extinct in the 1950s .

The Frisian is in the Dutch province of Friesland (Fryslân) spoken by about 440,000 people, of which there talking about 350,000 as their mother tongue. It consists of four main dialects and four other minor dialects. West Frisian is the only one of the three Frisian language branches to have developed a standard variety .

Non-Frisian varieties with the designation "Frisian"

There are various linguistic varieties that were adopted by Frisians or by residents of former Frisian populated areas instead of Frisian, but linguistically not counted among the Frisian languages. Nevertheless, many of these vernacular varieties have the name “Frisian” in some form as a self or external name or at least part of it.

Today, “East Frisian” is usually used to describe East Frisian Platt , which has replaced Frisian as the vernacular in East Frisia. This was favored by the fact that the Sater Frisians no longer count themselves among the Frisians and do not call their own language Frisian , but rather Saterland ('seeltersk'). Basically it is similar with the Low German in North Friesland. Since the Frisian language is still alive there, the term North Frisian is used exclusively for the Frisian dialects. The North Frisian Platt does not differ so much from the rest of Schleswig Platt as the East Frisian Low German from its neighboring dialects.

Often called Stadsfries dialects designated dialects of the towns in the province of Friesland also not part of the Frisian. They were taken over by Frisian merchants from the province of Holland in the 15th century. Due to the strong influence of West Frisian grammar and syntax , classification as a Dutch dialect is also difficult. They are therefore mostly treated as a special group within the Dutch language , but sometimes even referred to as a special language.