The name Westerlauwersk refers to the historical language border along the Lauwers , which separated it from East Frisian . 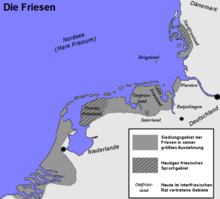 Historical and current settlement area of ​​the Frisians

The closest relatives are Sater Frisian as the only remaining remnant of East Frisian with approx. 2000 speakers in Saterland and North Frisian with approx. 10,000 speakers in Schleswig-Holstein. Together, the three languages ​​make up the Frisian language group. The closest related language is English ; in the past, Frisian and English were often combined in one Anglo-Frisian language group. Today, English and Frisian are usually categorized as North Sea Germanic languages together with the Low German language (and sometimes also the Dutch language) . Low German, which is genetically closely related to the Frisian languages, has already developed differently since Old Saxon times and has lost many North Sea Germanic features. There is also a close relationship with Dutch within West Germanic , and the two languages ​​have been in close contact for centuries , which led to different mutual influences.

The first page of Freeska Landriucht was the first book in (old) Frisian and was published in 1485.

After Christianization , Friesland was a remote corner of the Franconian Empire . The Frisians hardly felt the violence of the emperor. In 1165 the Holy Roman Emperor distributed Friesland between the Bishop of Utrecht and the Count of Holland . None of these sovereigns could exercise their power permanently. In the late Middle Ages, Frisian was the administrative language in the Frisian lands between the Vlie and Weser. The language that was spoken in the late Middle Ages was Old Frisian .

In 1233 the Count of Holland visited Friesland for the last time to exercise his sovereign rights there. The bishop of Utrecht had given up on that before. This definitely marked the beginning of the time of Frisian freedom . Friesland administered itself, even if Friesland continued to belong to the Holy Roman Empire. In 1345 the Dutch Count Wilhelm IV tried again to force the violence. According to tradition, there should have been a bloody fight in the Battle of Warns in which the count died. The language of the authorities and the judiciary remained Frisian. Many Frisian-language documents and codes of law have survived from this period.

In the time of the Frisian freedom there was no strong central power in Friesland. Nevertheless, the economy flourished due to the intensive trade, u. a. with the states on the Baltic Sea and Russia. The Frisian eleven cities owe their fame a. a. the decay of the Hanseatic League . It was a time of prosperity until about 1,400 party battles broke out. In connection with these battles between the so-called Schieringers and Fettkuers, the help of Albrecht, the Duke of Saxony, was finally asked. In 1498 he took power in large parts of the Frisian countries. With that the internal war and the Frisian freedom came to an end. Albrecht of Saxony appointed many non-Frisian administrators. With this, Old Frisian gradually disappeared as an administrative language. Official documents were written in Frisian until around 1530.

Gysbert Japicx, the most famous Frisian-speaking writer of the 17th century.

The Middle Frisian era begins in 1550.

In 1514 Albrecht von Sachsen sold Fryslân to Charles V. In 1579 the Netherlands, including Fryslân, withdrew from the power of his son Philip II, and from that point on the Netherlands was politically independent under the name Republic of the Seven United Provinces . During the Eighty Years' War Fryslân was one of the Seven Provinces. In the 16th and 17th centuries, the administrators in Fryslân were again predominantly Frisians. However, the Dutch language , which had been the administrative language since the 16th century, became increasingly important. At that time, Dutch was the administrative language, while Frisian was clearly the colloquial language in the country.

The mayor's son and elementary school teacher Gysbert Japicx ensured that Frisian was once again given a high priority in culture. Due to his extensive and remarkable oeuvre, he is considered the founder of Frisian literature. The situation changed little in the 18th century, there were some bestsellers but no great writers.

Frisian, which was written and spoken after 1800, is called Neufriesisch.

In the 19th century, Fryslân was a province of the Netherlands in which Dutch was the only official language. Schools were advised not to tolerate Frisian. In the course of Romanticism, a Frisian language movement arose, which tried to save the language from its destruction and sought recognition. New Frisian writers emerged, such as the Halbertsma brothers: Joost Hiddes, Tsjalling and Eeltsje encouraged the Frisian population to read and sing in their own language. In the 19th century the language societies Frysk Genoatskip (1827) and Ald Selskip (1844) were founded. In 1908 a language society with a Christian identity called Kristlik Frysk Selskip was established. A group of Frisians who were disturbed by the conservatism of "Ald Selskip" founded the Jongfryske Mienskip company in 1915 , which focused on the language of the authorities and judicial power.

In 1907 the provincial administration introduced a subsidy for Frisian in schools for the first time . However, lessons could only be given after leaving school. Hundreds of Frisians protested continuously, however, until Frisian became an elective in 1937.

In 1915 a service was held in Frisian for the first time, and in 1943 the first Frisian translation of the Bible appeared. The amateur theater flourished for years in and outside Fryslân, with originally Frisian and translated plays. Frisian songs were composed and sung by the many Frisian choirs. Societies like Jongfryske Mienskip and magazines like De Tsjerne (1946) stimulated literature. The Afûk Commission was founded in 1928 for adult education and the development of teaching materials for children . In 1938 a research institute was founded to study the Frisian language and culture: the Fryske Akademy (1938).

The Frisian movement continued to take shape after 1945. All sorts of groups and organizations emerged which were geared towards the direct or indirect promotion of Frisian. An official status for Frisian in public life was sought. An important event in the post-war period was Kneppelfreed . In the weeks following Kneppelfreed, three ministers visited Fryslân and, at the request of the Dutch Second Chamber , two committees of inquiry were set up, one for education and one for justice. As a result, Frisian was allowed as the language of instruction from 1955. In 1956 the right to speak Frisian in court was established by law. The right to use the Frisian language in writing in court was established by law in 1995. Since 1997, all civil status documents have been drawn up in two languages. Since 2001 notarial deeds of foundations , associations and clubs can also be drawn up in Frisian and entered in the public register. This made Frisian the second state language in the Netherlands.

Development of the standard language

After the Middle Ages, Frisian was initially hardly used as a written language. The poet Gysbert Japicx wrote in the 17th century in a spelling that he personally developed, which differed greatly from the Old Frisian.

The Coulonhûs , seat of the Fryske Akademy.

When Frisian was increasingly used as a written language again in the 19th century, there was no uniform spelling. Instead, they often followed the orthographic principles of Japicxs. In 1834 Justus Hiddes Halbertsma presented the West Frisian spelling he had developed, which he compared with the Japicx orthography in a book. The association Selskip foar Fryske Taal- en Skriftekennisse ( Selskip 1844 for short ) set up a committee in the middle of the 19th century to develop uniform spelling. In 1879 the publication De Fryske Boekstavering, in hantlieding , finally appeared . These spelling rules, which were often referred to as Selskipstavering (company spelling ), contained numerous elements from the Halbertsma orthography and in some cases borrowed from Old Frisian.

In 1945 the Selskipstavering was replaced by the Akademystavering (academy spelling ). It is named after the Fryske Akademy , which was responsible for this reform. The purpose and aim of the spelling reform was to reduce the gap between written and spoken language. The spelling rules were officially established in 1969 by the provincial administration and thus made official spelling. At the same time, the parliament of the province of Fryslân decided: "Establishing the uniform Frisian spelling is one of the powers of the parliament of the province of Fryslân." A committee of the provincial parliament developed a modernized spelling together with experts from the Fryske Akademy. The committee ended this task in 1976 and, after adoption by Parliament, the new rules came into effect on January 1, 1980. The new spelling was named Steatestavering (parliamentary spelling ).

The standardization of the West Frisian language could not completely prevent the different spelling of individual words due to the dialect variety. Therefore, in 2011 the Fryske Akademy was commissioned by the provincial parliament to develop a word list (West Frisian: foarkarswurdlist ) in order to achieve a uniform spelling of these words. In order to be able to implement this mandate, a new spelling reform was strongly recommended by the Fryske Akademy. On January 27, 2015, the provincial parliament decided to carry out this new spelling reform. The resolution came into force on January 31, 2015. However, this was only a slight adjustment, since of 83,000 words in the foarkarswurdlist only 332 actually changed.

Traditional distribution of languages ​​in the Northern Netherlands

There are eight dialects in West Frisian. Four of them are considered to be the main dialects, spoken extensively and by many thousands of people. The other four are only used locally and have a total of just under 1000 speakers.

The main dialects are:

The little dialects are

Standard Frisian is based on the three very similar dialects of Nordhoek, Kleifriesisch and Forest Frisian.

In the larger cities of the province of Fryslân, the so-called city ​​Frisian is spoken. From a linguistic point of view, it is not Frisian, but a dialect of Dutch , albeit with strong Frisian influences, especially in grammar. City Frisian is often combined with the Frisian-Dutch mixed dialects Bildts , Ameländisch, Midlandish and Kollumerlandisch, which are spoken in the province of Fryslân.

In the province of North Holland , north of Amsterdam between the North Sea and the IJsselmeer, there is a region of West Friesland . It got its name for historical reasons. There, however, no Frisian is spoken, but rather Dutch or Dutch (Dutch) dialects. At most there is a West Frisian substrate there , i.e. an influence of the Frisian spoken there earlier. In Dutch these dialects are called West-Fries , while the West-Frisian language is only known as Fries or Westerlauwers Fries .

At the academic level, the University of Groningen is the most important university for hair studies with the West Frisian language as its focus. Frisian courses are occasionally offered as minor or elective subjects at the universities in Amsterdam and Leiden . West Frisian is also regularly represented in teaching at the hairdressing department at Kiel University . In Leeuwarden , the Fryske Akademy has been a scientific institution for researching the Frisian language since 1938. The Frisian teacher training for secondary school is offered at the Noordelijke Hogeschool Leeuwarden. For future teachers in primary schools, there is a trilingual teacher training program at the Stenden Hogeschool .

In the province of Fryslân there are some entirely Frisian-speaking kindergartens and crèches, plus around 120 bilingual facilities for early childcare. In 1980 West Frisian became a compulsory subject in elementary schools, and in 1993 it became a compulsory subject in middle school. In addition, there have been trilingual primary schools since 1996 and trilingual secondary schools since 2010. In 2013 there were around fifty trilingual primary schools in the province of Fryslân, where Frisian, Dutch and English are used as the language of instruction. In the same year there were three trilingual secondary schools. As a rule, the Afûk is responsible for teaching Frisian to adults.

German: All people are born free and equal in dignity and rights. They are endowed with reason and conscience and should meet one another in a spirit of brotherhood.