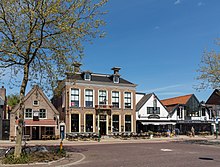 Monumental building in the street

Drachten is a village in the municipality of Smallingerland in the Netherlands ( province of Friesland ). On January 1, 2017, Drachten had 44,940 inhabitants.

Drachten is located in the east of the province, on the Amsterdam - Groningen motorway . There are no railways in this region. As the economic center of the region, Drachten has many small and medium-sized industrial and trading companies of all kinds. In Drachten there is a cultural center with a concert hall, art museum and theater, as well as a hospital and many schools.

Drachten takes part in the EU project Shared Space . As a result, all traffic lights and traffic signs in the city center have been removed. The only traffic rules are “right before left” and a general speed limit of 30 km / h. Since the beginning of the project, the number of accidents has decreased so drastically that there are hardly any accidents today. Other European cities are also taking part in the project under the slogan “city without signs”. These are Ejby in Denmark, Ipswich in England , the Belgian city of Oostende and Bohmte in Lower Saxony.

The village came into being when canals were dug for peat removal from 1641 onwards, and a number of trades arose along these waterways. Drachten flourished until the middle of the 19th century . It also became the economic and administrative center of the surrounding villages. The town hall of Smallingerland is still in Drachten.

Daughters and sons of the place