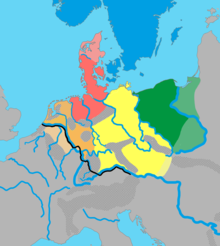 Approximate distribution of Germanic dialect groups around the birth of Christ

This name can be found in the Roman writer Tacitus . In his work De origine et situ germanorum he reported on three Germanic cultures , of which the Ingaevones lived closest to the ocean. The Roman writer Pliny previously reported on the Inguaeones and Ingvaeones in his Naturalis historia .

The term is common in several spellings. In addition to the rare version ingaevonisch come ingävonisch , ingväonisch and the modern to the spelling adapted ingwäonisch and rarely ingäwonisch ago.

Based on the Ingaevones, who live on the North Sea according to this tribal classification, to which the Frisians , Saxons and Angles are counted among others , the term Ingwäonisch was chosen as a label for the linguistic features that the term Anglo-Frisian no longer did justice to . However, the term is often criticized because it can be understood as a direct reference to the unknown language of the Tacite Ingaevones.

The term Ingwaeon can still mean the same as the term Anglo-Frisian . In Ferdinand Wrede's ginger theory , the two terms have the same meaning.

However, in linguistics today, Ingwaeon is mostly equated with North Sea Germanic. The term North Sea Germanic comes from Friedrich Maurer's theory of the structure of the Germanic peoples and includes not only English and Frisian, but also Low German.

In addition to Old English and Old Frisian , Old Saxon is also one of the North Sea Germanic languages. However, Low German came under the influence of southern dialects: first Franconian after the subjugation of the Saxons by Charlemagne , then under High German influence. Low German has lost its North Sea Germanic character - apart from a few relics (Ingwaeonisms).

The Netherlands is assessed differently, it usually is not associated with the North Germanic, as it Frankish foot on dialects. However, Dutch has a North Sea Germanic substrate . These North Sea Germanic influences are sometimes viewed as a Frisian substrate, and sometimes not assigned to Frisian.

Viewpoints on the topic of "ginger"

The discussion about the North Sea Germanic languages ​​is made more difficult by the fact that quite different theories are associated with the Ingwäons and their languages.

For example, the German linguist Ferdinand Wrede put forward a theory in 1924 according to which the Low German and Swabian-Alemannic regions formed a common Ingwaeon language area for a while, with common linguistic properties. According to Wrede's theory, “West Germanic” and “Anglo-Frisian” (Ingwäonisch) were originally the same. According to this theory, the Goths drove a wedge between the two areas on their migrations and separated them from one another. German is Gothicized "West Germanic" (Ingwäonisch). However, this theory has proven to be flawed.

Another exponent of radical ginger theories was the Dutch linguist Klaas Heeroma. Since 1935 he has repeatedly dealt with the Ingwaeon and often aroused contradictions with his theories.

The Dutch linguist Moritz Schönfeld, however, uses the term Ingväonisch very carefully. For him, this term is only a flexible dialectological term for mobile isogloss complexes, without reference to prehistoric tribes or unit languages. For him, the term is a label for linguistic phenomena on the coast, without any precise delimitation in space and time.