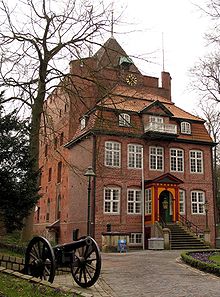 The Ritzebüttel Castle in Cuxhaven was the residence of the Hamburg officials during the time that Ritzebüttel belonged to Hamburg . The castle , which partly dates from the 14th century , is one of the oldest preserved secular buildings of the North German brick Gothic in the region and is open to visitors today.

The history of the castle 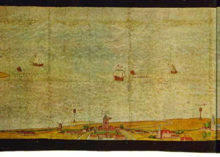 Ritzenbüttel Castle on the Elbe map by Melchior Lorich from 1567

The former Hamburg Senator Barthold Heinrich Brockes and his successors are thanked for the beautification of the palace on a memorial stone in the palace gardens .

The castle is based on a residential tower built around 1340 for the feudal lords of Saxony-Lauenburg . The construction only followed 30 years after the construction of the externally very similar tower on the Hamburg island of Neuwerk . After disputes with the city of Hamburg and a subsequent siege by the Hanseatic city in 1393, the castle passed from the Lappes into the possession of Hamburg on July 31, 1394 . Since it was possible to control the Lower Elbe from Ritzebüttel and the fortifications also included larger estates, the place was a valuable possession for Hamburg. The city also had access to a winter harbor and from here it was able to act faster against the pirates of the North Sea .

Most of the bailiffs were Hamburg senators , including the writer and poet Barthold Heinrich Brockes and the lawyer Amandus Augustus Abendroth . The bailiffs resided for over 500 years in the complex, which was transformed from a castle into a palace. They were endowed with extensive powers, which were also reflected in the handsome furnishings of the castle. Nevertheless, the office in Ritzebüttel was not particularly popular with the Hamburg officials, as it meant fulfilling one's duties deep in the provinces and barely three days' journey from the convenience of Hamburg. In 1864 the judiciary and the administration of the office were separated, and the Hamburg officials lost much of their influence. Finally, in 1937, as part of the Greater Hamburg Act , Cuxhaven was exchanged for Altona , Harburg-Wilhelmsburg and Wandsbek to Prussia , and the castle finally lost its political importance.

Until 1981 the building was used for different purposes. At this point in time, the castle was in poor condition and in dire need of renovation. The renovation work, which was delayed again and again due to lack of money, lasted until 1996. The palace was handed over to the public with a new usage concept and today houses a restaurant, exhibition rooms and a wedding room. All rooms can be visited. Various markets are also organized on the castle grounds.

The late medieval castle originally consisted of a mighty defensive and residential tower with a rectangular floor plan, surrounded by ramparts and moats, and thus corresponded to the type of a tower castle . This tower still forms the core of the completely brick- built complex. During the time of the takeover by Hamburg, the defenses were strengthened by expanding the walls to a thickness of three meters and increasing the tower to 21 meters, the roof structure measuring an additional nine meters. The tower, crowned by large battlements, has remained largely unchanged from the outside since it was built.

In the 17th century , a half-timbered extension was added to the front of the tower, which with its three turrets and a large entrance gate quoted the Hamburg city arms. This portal building was demolished again in the 18th century and replaced by the five-axis baroque porch that has been preserved to this day . The castle's defenses were largely demolished over the centuries and can only be seen today as fragments in the castle garden .

The castle features features and construction details from almost 600 years of art history. The original Gothic brick vault from the first construction phase can still be found inside the defense tower . In addition to the ballrooms on the second and third floors, the living quarters of the bailiffs with furnishings from around 1900 have been preserved.

The Schweizerhaus in the castle park

In 1847 the Schweizerhaus was built in the Swiss style as a tea house in the gardens of the Ritzebüttel Castle on behalf of the then bailiff Sthamer. The style of this Swiss house can also be found in some tea and garden houses in other facilities of the time. The house is in the middle of the park path that leads around the castle and the moat. The later construction of an open-air stage right next to the house emphasized its importance, because both facilities were temporarily used together. 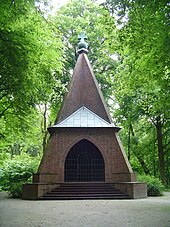 On February 21, 1932, the former mayor Dr. Pit in the park of the Ritzebüttler Castle a war memorial . It was designed by the then city planning officer Carl Jung and serves to commemorate those who fell in the First World War . The monument is located on the grounds of the Krähenhof, which burned down in 1909 and was added to the area of ​​the palace gardens in 1913. Architecturally, it is similar to the Kugelbake . The last structural changes were made in 1980, when the plaques of honor, carved from sandstone, were replaced with metal plaques and an iron grating was installed.