The following important information is still missing in section:
Description of architecture, not only in Alpine countries, but also in Scandinavia
Help Wikipedia by researching and pasting it . 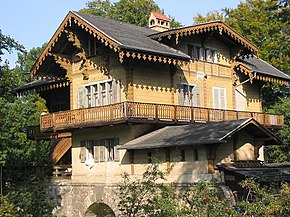 The Swiss style , also Swiss house style , Swiss wood style or chalet style , is an architectural direction of historicism and describes buildings in the - alleged - style of alpine farmhouses. In Austria the term “ Heimatstil ” is common, but it is used in a more comprehensive sense for all historicist architecture based on traditional building forms.

The Swiss style is characterized in particular by gently sloping and protruding roofs as well as by board carvings on roofs, balconies and exits in the form of board carvings. The windows look on ornate wooden consoles . The "Swiss gable", a floating gable in front of the gable, is also a typical design element.

This architectural style was popular from the 19th century to the Belle Epoque at the beginning of the 20th century in Germany, Austria-Hungary and Scandinavia. A real enthusiasm for Switzerland with the romantic ideal of closeness to nature had gripped all of Europe in the late 18th century. The simple life of the mountain farmer was mythologized - by thinkers such as Jean-Jacques Rousseau - and nature equated with truth. The Swiss style should represent a counter-image to the emerging industrialization .

The first Swiss houses were built as a typical staffage element in the landscape gardens and mostly served as a residence for gardeners or park rangers. Later they appeared in city locations such as Dresden . At the beginning of the 19th century, the style found its way into Switzerland itself, where it was used for villas and later preferred for train stations and hotels.

Well-known architects such as Karl Friedrich Schinkel built in the Swiss style. In 1811 he had undertaken architectural studies in the Alps on a trip and in 1829 designed a Swiss house with staff apartments for the Pfaueninsel .

The Swiss style was spread through master works. The fashion of the Swiss house ebbed at the beginning of the 20th century.

Other names for the Swiss style

Today there are many Swiss-style villas in the Dresden area , in resorts in the German low mountain range such as in the Harz Mountains , in northern Bohemia and in major southern German cities. There are also examples of villas in the Swiss chalet style in the seaside resorts such as Binz and Heringsdorf , which are characterized by spa architecture - these buildings often come from the production of the Wolgaster Holzbau corporation .