August von Sachsen-Weißenfels as Prince Archbishop of Magdeburg with miter and in armor in front of his residence in Halle (detail), unknown master, around 1675, oil on canvas

August von Sachsen-Weißenfels (born August 13, 1614 in Dresden , † June 4, 1680 in Halle ) was the first Duke of the Electoral Saxon secondary school of Saxony-Weißenfels and Prince of Saxony-Querfurt and the last administrator of the Magdeburg Archbishopric and founded a sideline of the Albertine Wettiner, the dukes of Saxony-Weissenfels.

Duke August was the second son of Elector Johann Georg I of Saxony , of his second wife Magdalena Sibylle of Prussia , a daughter of Margrave Albrecht Friedrich of Prussia . His siblings were the dukes Moritz von Sachsen-Zeitz and Christian von Sachsen-Merseburg , the elector Johann Georg II. Von Sachsen , the duchesses Maria Elisabeth , the wife of the duke Friedrich III. von Schleswig-Holstein-Gottorf and Magdalena Sibylle , the wife of Duke Friedrich Wilhelm II of Saxony-Altenburg .

At the age of 13, Duke August was elected administrator on January 23, 1628 by the Magdeburg Cathedral Chapter to replace the previous administrator Christian Wilhelm von Brandenburg . At this point August had already been coadjutor there for three years . However, he was initially unable to take up his office as administrator, as the competitor Leopold Wilhelm of Austria , supported by the Pope and the Emperor , who was supposed to return the archbishopric to Catholicism , also received the title of archbishop after the conquest of Magdeburg in 1631. Leopold Wilhelm, however, in fact never exercised the office due to the Swedish occupation of the Archbishopric that followed immediately. During the Peace of Prague , Electoral Saxony was able to win back the Archbishopric for August. But it was not until the Swedish troops withdrew from his royal seat of Halle in 1638 that he was finally able to take office on October 18 of the same year. Secured by a neutrality agreement with Torstensson , Duke August was finally able to settle permanently in Halle on December 31, 1642. This was the beginning of a veritable upswing of the city into a courtly center.

In 1643, Duke August was accepted into the Fruit Bringing Society by Prince Ludwig I of Anhalt-Köthen . He gave him the company name of the well-to-do and the motto in goodness virtuous . The Bibernell root was given to him as an emblem . His entry can be found in the Koethen Society Register under number 402. The rhyme law that he wrote on the occasion of his admission is also recorded there:

The Wurzzel Bibernel in goodness virtuous
The stone and water addiction are too well advised
Drumb Wolgerahten I of such virtue
I have been named: One should come to equip
Common use wol: Yes, where virtue is
Aldar take part in the highly desired deeds:
The well-rounded fruit is validly presented,
Because virtue excels in everything bare.

On July 15, 1667, the sons of Duke Wilhelm IV of Saxe-Weimar proposed the presidency of the Fruit Bringing Society to Duke August five years after his death . He accepted this office although he was neither an artist nor a scientist. As an art-loving patron, however, he encouraged the maintenance of music and theater at his court. Under his leadership, the Fruitful Society changed more and more to a court order with purely representative tasks. Through his love of splendor and waste, he laid the foundation for the deep indebtedness of his descendants.

By fulfilling his father's testament from 1652 and making inheritance comparisons with his brothers, Duke August was able to secure and enlarge his domain within the Saxon hereditary lands. The comparison of April 22, 1657 and the gain in the Barby rule , which he later left to his son Heinrich and his heirs, as well as the area around Querfurt should be mentioned.

On July 25, 1660, the foundation stone was laid for August's Neu-Augustusburg Castle in Weißenfels . This happened on the castle hill at the point where the castle, which had been devastated by the Swedes, had been. With the end of the war and the associated Peace of Westphalia in 1648 , the Electorate of Brandenburg acquired the claim to the secular property of the Archdiocese, the Archbishopric Magdeburg as the future Duchy of Magdeburg , which also included the city of Halle, where August lived in the New Residence . The claim should be claimed as soon as August, the last administrator of the Archdiocese of Magdeburg, died. It is therefore assumed that Duke August had the Weissenfels Castle Neu-Augustusburg built for his son Johann Adolf I , as this would be limited to the secondary education of the Duchy of Saxony-Weissenfels .

He had the following children with his first wife:

He had the following children with his second wife: 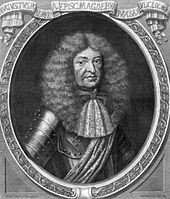