Representation of Christian on a medal from 1574 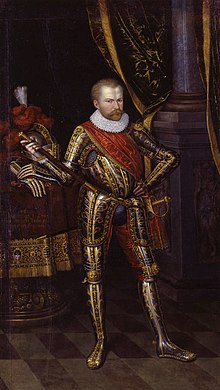 Christian I. in armor

Christian I. - Excerpt from the Dresden prince procession

Christian was a son of Elector August of Saxony (1526–1586) from his marriage to Anna (1532–1585), daughter of King Christian III. from Denmark . After the death of his older brother Alexander in 1565, Christian became elector prince, he was the only one of his nine brothers to survive his father. Contemporary witnesses described him as talented but completely uneducated. Christian was trained by the Calvinist Christian Schütz , among others , and was involved in his father's government work at an early stage. After the death of his father and the takeover of the government in 1586, Christian showed little interest in state affairs and indulged in amusements, especially hunting and alcohol. So he liked to let his buddies carry him up a mountain while drunk, so that he could race down the slope with his horse at full gallop.

Christian disliked the conflict between Lutheran orthodoxy and the Philippism based on Melanchthon , which had ruled during the reign of his parents. As early as 1585 as co-regent of his father, he passed a law against theological bickering. He also rejected the concord formula initiated by his father . In 1587 Christian called Johann Salmuth to Dresden as court preacher who, among other things, abolished exorcism during baptism . Here Christian's adviser and influential Chancellor Nikolaus Krell was in charge, bringing Saxony closer to Calvinism without, however, officially changing denominations. There was considerable resistance to this cryptocalvinism , supported by Christian's wife Sophie von Brandenburg .

Domestically, Krell's influence asserted itself in the curtailment of the powers of the Privy Council and the estates in government affairs. In terms of foreign policy, Christian was dependent on his brother-in-law Johann Kasimir von Simmern . Christian was even convinced that his sister, Johann Kasimir's wife Elisabeth , was planning a murder plot against her husband. With Johann Kasimir Christian concluded an evangelical protection alliance and supported the Protestants in France . However, Christian refused to take command of an auxiliary army to be dispatched.

Christian had a preference for festivals and spectacles of all kinds, especially for jousting games, which is why he had the stable yard in Dresden laid out as a tournament site from 1586 . In addition, under his rule Königstein was expanded as a fortress.

Christian died in Dresden at the age of thirty after a lengthy stomach and intestinal problem. The elector was buried in Freiberg Cathedral .

The eldest, Prince Elector Christian, was barely eight years old when he died. The Dreibrüdertaler minted in the Dresden mint shows the three young princes under the tutelage of Friedrich Wilhelm of Saxony in Weimar and Altenburg

On April 25, 1582 Christian married Sophie (1568–1622), daughter of Elector Johann Georg von Brandenburg in Dresden , with whom he had the following children: