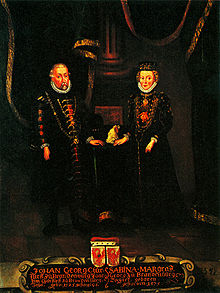 Johann Georg was the son of Joachim II and his first wife Magdalene von Sachsen , daughter of Georg von Sachsen .

1560 the bishop of Brandenburg, renounced Joachim von Münsterberg favor of John George to the Bishopric of Brandenburg , the acting head he was.

After the Margraviate of Brandenburg had been divided into the Kurmark under his father Joachim II after the death of his grandfather, Elector Joachim I , and the Neumark as Margraviate Brandenburg-Küstrin under his brother, Margrave Johann , rule fell again under Johann Georg together, because Johann died only ten days after his brother, without leaving any descendants entitled to inherit.

Johann Georg took over debts of 2.5 million guilders from his father Joachim II, who died on January 3, 1571 in Schloss Köpenick . He had all the houses of his father's favorites searched and sealed in Berlin , at the same time he allowed a pogrom in Berlin, in which Jews were abused and the synagogue at the Kleiner Jüdenhof in the northern Klosterstrasse (today north of Karl-Liebknecht-Strasse) was devastated and most of the Jewish households were looted. The looters publicly burned stolen promissory notes. Significant Lutheran believers, like the grocer Greaves, on the other hand, could rely on the sovereign protection. Johann Georg then imposed an absolute curfew on the Jews who were harassed and injured in this way.

As the alleged culprit of the financial misery, Johann Georg Lippold incriminated Ben Chluchim , the mint master and court factor of his father, and in 1571 accused him of misappropriating landlord's income and unjust enrichment. As a court Jew, Lippold was a lender and therefore earned from the interest paid . Complaints about the amount of the interest were already made during Joachim II's lifetime, but the latter rejected the complaint. He pointed out that Lutheran lenders in Frankfurt an der Oder in the Mark region even charged higher interest rates, which was not surprising in view of the devaluing local currency.

The death of Joachim II offered the new sovereign, as well as the noble, commercial and other debtors of Lippold, the opportunity to get rid of the Jewish creditor. In the trial of the embezzlement, however, the court exonerated Lippold after examining all the books. On the contrary, the judges confirmed that Joachim II Lippold was still owed 89 thalers and 5 silver groschen.

The Brandenburg Chancellor, Lampert Distelmeyer, handed Lippold's debtors their transferred pledges and promissory notes without repayment without any legal basis. However, the opponents did not rest and Lippold, who had been placed under house arrest after three months of pre-trial detention, was not released, but rather in 1573, three days before the end of house arrest, under fictitious suspicion of sorcery and murder , and according to Section 44 of the Constitutio Criminalis Carolina put through an embarrassing legal process. The charge of sorcery allowed the use of torture and so Johann Georg Lippold had the confession extracted under torture that he had poisoned Joachim II, his employer and patron.

Lippold was sentenced to death and on January 28, 1573, whacked and quartered . His death heralded an even more difficult time for the Brandenburg Jews, who under Joachim II had to pay higher compulsory levies and taxes than other children of the country. Johann Georg ordered their expulsion by February 1, 1573 at the latest, whereby they still had to liquidate their assets and transfer them to him. Most went to Prague , many to Poland, where King Casimir the Great issued them letters of protection. Johann Georg forbade Jews to settle in Brandenburg, which was only revised by the Great Elector Friedrich Wilhelm by edict in 1671.

After these cruel excesses, Johann Georg founded the first humanistic educational institution in what was then Berlin on July 13, 1574 , the Berlinische Gymnasium zum Grauen Kloster . Above all, Johann Georg tried to compensate for the consequences of his father's lavish courtship. His concern about the excessive indebtedness of the Kurmark and his efficient administration and repayment of debts earned him the nickname Oeconomicus .

When the Lutheran territories of the empire tried to end the theological disputes after Martin Luther's death with the concord formula in 1577 , Johann Georg signed the document, had all Brandenburg pastors and schoolmasters come to Berlin on July 22 of the same year and obliged them to accept the new confession. He also signed the Book of Concords of 1580.

The elector, who loved the virtues of moderation and constancy, was averse to experiments. The calendar reform of Pope Gregory XIII. he did not introduce, like the Wettins and most of the Protestant rulers of Europe.

After his death, the electorate fell to his son Joachim Friedrich .

Johann Georg's coat of arms (from a book of coats of arms that was prepared in 1594 on the occasion of the Reichstag in Regensburg; Bavarian State Library, cod.icon. 326)

For the former Berliner Siegesallee , the sculptor Martin Wolff designed monument group 21 with a statue of Johann Georg as the main figure. With a cross on its chest, the figure emphasizes the strictness of the elector in religious matters. He leans on the back of an armchair, over which lies a plan of the Spandau Citadel . The busts of Count Rochus zu Lynar (chief architect of the citadel) and Chancellor Lampert Distelmeyer , who had supported Georg in his rigorous austerity policy, were assigned to the statue as secondary characters . The group's unveiling took place on December 18, 1901.