Portrait of Christian of Brandenburg-Bayreuth 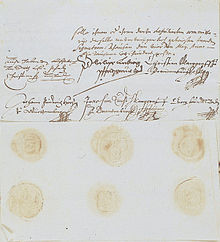 Founding document of the Protestant Union in Auhausen an der Wörnitz on May 14, 1608 (today in the Bavarian State Archives): Christian, Margrave of Brandenburg (top right)

Christian from the Hohenzollern family was a son of the Brandenburg Elector Johann Georg and his third wife Elisabeth (1563–1607), daughter of Prince Joachim Ernst von Anhalt .

The takeover of rule had already been legitimized and prepared in 1598 by the Gera house contract . He took over the government at the same time as that of his brother Joachim Ernst in the neighboring Margraviate of Brandenburg-Ansbach . From 1604 Christian moved the residence from Kulmbach to Bayreuth , whereby the Plassenburg ob Kulmbach remained a state fortress. The principality he ruled was no longer referred to as Brandenburg-Kulmbach, but as Brandenburg-Bayreuth after the new capital.

In 1606 he was elected district bishop of the Franconian Empire . He was one of the founders of the Protestant Union established on May 12, 1608 and allied himself with Sweden in the Thirty Years War . The small principality was hardly prepared for hostilities in its own country. Troop movements of strong friendly and hostile units led to chaotic conditions. The population increasingly suffered from the expense of feeding the troops and various payments imposed. The units directly subordinate to the margrave had hardly any military significance in view of the troop strengths that were passing through and only achieved notable successes by taking neighboring Bamberg towns. In this situation the margrave left his country. Emperor Ferdinand II deposed him in 1635 (Christian joined the Peace of Prague that year ), but he continued to rule.

In 1654, a year before his death, the elderly margrave went on a deer hunt in Neustadt an der Aisch , one of the four capitals of his country.

Under the company name Der Vollblühende he was accepted as a member of the literary fruitful society .

Coin with the portrait of the margrave