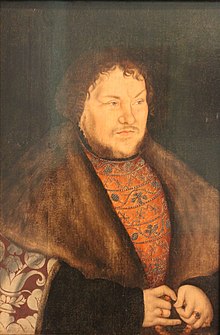 Painting Elector Joachim I of Brandenburg by Lucas Cranach the Elder Ä. , 1529 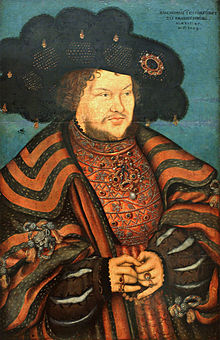 Joachim was the son of the Brandenburg Elector Johann Cicero . From 1490 to 1498 he was educated in the Franconian homeland of the House of Hohenzollern . After the death of his father, Joachim, who was then only fifteen in 1499, took over government together with his ten-year-old brother Albrecht , initially under the tutelage of his uncle, Margrave Friedrich V von Ansbach-Kulmbach, contrary to the provisions of the Golden Bull . The brothers' joint government lasted until 1513, when Albrecht became Archbishop of Magdeburg . After Albrecht also obtained the archbishopric of Mainz in 1514 , the House of Hohenzollern had two votes in the electoral college, with the Mainz elector also having a particularly prominent position as archchancellor of the empire.

As sovereign, Joachim showed himself determined, sometimes ruthless and interested in many things. The recklessness showed itself above all in strict legislation and the executive branch connected with it . The foundation of the Brandenburg University of Frankfurt in 1506 is significant . Also to be emphasized is the uniform inheritance law that Joachim gave his countries in 1527 with the Constitutio Joachimica and which was strongly based on Roman law . Since taking over the government, he also fought resolutely and indulgently against robber baronism , which at the same time strengthened the power of the Hohenzollern against the local noble families; so in 1506 he hanged seventy robber barons, including forty nobles . In 1524, after the death of Count Wichmann von Lindow-Ruppin , Joachim was able to move into the presumably imperial direct rule of Ruppin and unite it with the Margraviate of Brandenburg. In 1529, in the Treaty of Grimnitz for Brandenburg , Joachim had the succession in the Duchy of Pomerania assured in the event of the extinction of the line of grief in the male line.

Before the imperial election in 1519 Joachim stepped I. first as a partisan of the French king Francis I on, eventually to his voice to the Habsburg Charles V to give.

In terms of religious policy, Joachim was a bitter opponent of the Reformation . His wife, the Danish Princess Elisabeth , on the other hand, leaned towards the Lutheran doctrine and fled from her husband to Wittenberg in 1528 . During his rule there was also brutal persecution of the Jews . In 1503, at the urging of the estates , Joachim I ordered the expulsion of Jews from the Mark. In 1510 the Berlin High Court sentenced over thirty Jews to be cremated. (see Berlin host desecration process )

His court astrologer Johann Carion caused the elector to flee to the Kreuzberg ( Tempelhofer Berg at that time ) from a flood that he had announced in 1525 . The historical novel Am Himmel wie auf Erden by Werner Bergengruen deals with this event. The elector was interested in occult sciences and was in contact with Johannes Trithemius .

In his will, written in 1534, Joachim urged his heirs to keep the Mark Brandenburg for all time in the Catholic faith. In violation of the house law drawn up by his grandfather Albrecht Achilles , he determined that parts of the Neumark should fall to his second son, Johann . His eldest son Joachim II succeeded him in the electoral dignity . However, since Johann died without sons, the country could be reunited under the grandson of Joachim I, the elector Johann Georg .

In 1502 Joachim married Elisabeth of Denmark, Norway and Sweden (1485–1555) in Stendal , the daughter of the Danish King John I. From this marriage there were two sons and three daughters: 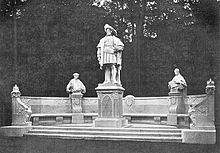 Group of statues in the Siegesallee

Statue of Joachim I in the Spandau Citadel before restoration

In 1900 the sculptor Johannes Götz designed monument group 19 with a statue of Joachim as the main character for the former Berliner Siegesallee , which was often ridiculed as “Puppenallee” . As secondary characters, busts of his younger brother Albrecht and the bishop of Lebus Dietrich von Bülow were assigned to the statue . The first Siegesallee presentation of a Hohenzollern in court dress followed the portrait of Lucas Cranach the Elder down to the last detail in the depiction of the elector's costume . Ä. from 1529 (see above). A richly decorated, open scabbard with a wide collar and slit puffed sleeves lies over a beaded doublet and a knee-length skirt . Götz did not adopt the Cranachian physiognomy of the devout Catholic with the rosary in his hands. He showed the elector as a strict Renaissance prince with the sword and with a threatening, energetic look. The presentation underlined the respected position of Joachim I in the college of electors , in which he is said to have been a brilliant speaker and which had earned him the nickname Nestor .

The religious-political and scientific side of Joachim's reign represented the two minor characters. In addition, a rosary on the pedestal of the statue should symbolize his piety, oak twigs his solidity and owls on the corner pillars his wisdom. The motto of Joachim IUDICIO ET IUSTITIA (With judgment and justice) was affixed to the base of the base and on the back was the proverbial threat of the robber barons of the Brandenburg who wanted to defend themselves against the execution of knights who were involved in highway robbery . After the execution of Herr von Lindenberg, the Junker von Otterstädt is said to have written in chalk in Joachim's bedchamber during a hunting trip:

Joachim I later had the knight of Otterstädt quartered as a traitor . Compared to other Victory Avenue figures, the monument is well preserved and shows only slight damage. It has been in the Spandau Citadel since May 2009 .