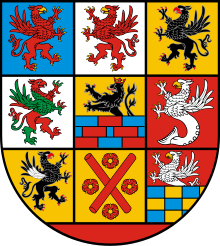 Coat of arms of the Duchy of Pomerania

Duchy of Pomerania is the name commonly used today for the dominion of the princely dynasty of the Griffins , which originated from Slavic roots and which consisted of the historical Pomeranian landscape in changing spatial and political divisions from the 12th to the 17th centuries . In the area of ​​Pomerania, located on the south coast of the Baltic Sea on both sides of the Oder River , there is now the Western Pomerania part of the German state Mecklenburg-Western Pomerania and the West Pomeranian Voivodeship and, to a lesser extent, the Pomeranian Voivodeship in the Republic of Poland . 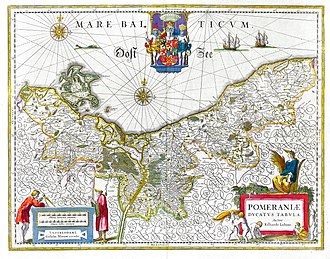 Map of the Duchy of Pomerania from the 17th century

In the course of history there have been several duchies in Pomerania whose geographical and political existence has changed several times due to unions and divisions. The ruling in these territories Dukes are going according to the grasping , collectively, as a common Pomeranian emblem gripping Dukes referred. The following partial duchies existed at times, the suffixes of which usually corresponded to the respective domicile:

Ecclesiastically, the duchy of the Griffin was under the diocese of Cammin since 1140 . Located in the overlapping area of ​​the interests of four archbishoprics, it was exemted , i. H. subordinated directly to the Holy See . The bishopric was located from 1140 to about 1150/55, initially in Wollin , then temporarily in Usedom and finally from 1178 in Cammin. In the course of the Reformation it lost its church leadership functions. And the secular territory of the Camminer bishops, the Cammin monastery, also came into the possession of the Greifenhaus in 1556 through the election of Prince Johann Friedrich, where it remained until the death of the last duke. However, the territory of the Principality of Rügen, acquired by the Griffins in 1325, belonged to two other dioceses, the mainland part to the Diocese of Schwerin ( Archdiocese of Bremen ) and the island of Rügen to the Diocese of Roskilde ( Archdiocese of Lund ).

Creation of the duchy

Around 995, the Polish Duke Boleslaw I (the brave) subjugated the country east of the Oder . In the course of the Polish wars between 1005 and 1013, Pomerania regained its independence. Early attempts to Christianize this area failed. The conflict between the Pomeranian Prince Siemomysl and the Polish Duke Casimir I , which has been ongoing since 1042 , was resolved in 1046 before Emperor Heinrich III. negotiated. Around 1100 several Pomeranian dukes are named, but due to the sparse tradition they cannot be brought into a genealogical context. The historical family trees of the griffins from the 16th and 17th centuries name a Swantibor as the ancestor, but his actual family relationships to the following generations cannot be clearly proven. The same applies to the other dukes of Pomerania named in the sources at the beginning of the 12th century - mainly Polish chronicles. That is why the brothers Wartislaw I and Ratibor I are today unanimously regarded as the first princes of the Griffin family.

In 1121 Wartislaw I had the Polish Duke Bolesław III. Subjected wrymouth. Boleslaw tried to secure his rule over the Pomeranian by introducing Christianity. However, the first attempt at a mission by a Spanish priest in Wollin failed. In May 1124 Otto von Bamberg set off from Gnesen on his first missionary trip, which took him via Pyritz to Cammin and Stettin . In February 1125 he returned to Gniezno. On his second missionary trip, Otto von Bamberg reached Demmin and Usedom in 1128 . 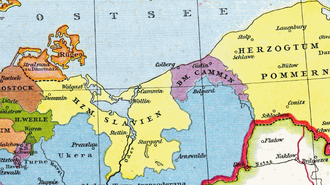 The duchies of Pomerania and Slavia around 1250

After the death of Pomeranian Prince Wartislaw I , the two partial duchies of Pomerania-Demmin and Pomerania-Stettin were established under his sons Casimir I and Bogislaw I towards the end of the 12th century. Bogislaw I was raised to the rank of imperial prince in Lübeck in 1181 as "Duke of Slavia", but as early as 1185 he had to recognize Danish sovereignty, which Pomerania was only able to shake off after the Battle of Bornhöved (1227) . The Ascanian Margraves of Brandenburg, who had been enfeoffed with the Duchy of Pomerania by Emperor Friedrich II in 1231, opposed the renewed admission to the imperial princes . They claimed feudal sovereignty over Pomerania and initially enforced it in the Treaties of Kremmen 1236 and Landin 1250, whereby they succeeded in acquiring extensive estates, including the Land of Stargard (later rule of Stargard ) and the Uckermark .

Casimir I. von Demmin was the first duke from 1170. Already on May 17, 1264 this line became extinct with the death of Wartislaw III. , a grandson of Bogislaw I, again. Wartislaw III. In 1236 lost the country of Zirzipanien west of Demmin to the Lords of Mecklenburg and in the same year also the country of Stargard, later Mecklenburg-Strelitz, to Brandenburg. His cousin Barnim I , who lived in Szczecin , took over his legacy . At the same time, this time represents the beginning of the settlement of the country under German law (see German East Settlement ).

Bogislaw I. ruled over Pomerania-Stettin and married Anastasia of Poland , the daughter of Mieszkos III. Under his grandson Barnim I , the German settlement of the country was intensified from 1230 and numerous cities were founded according to Luebian law . With the Treaty of Landin of 1250, the previously Pomeranian Uckermark went to the Margraves of Brandenburg , who had already acquired the Polish state of Lebus , which was Polish until 1248, the year before .

After the death of Wartislaw III. his territory came to Barnim in 1264. His sons Bogislaw IV, from their first marriage, and Otto I, from their second marriage, divided the duchy into the partial dominions of Pomerania-Volgast under Bogislaw IV and Pomerania-Stettin after the early death of their half-brother or brother Barnim II Otto I., whereby the dynastic connection was maintained by the legal institution of the whole hand. It was a north-south division; Pommern-Wolgast comprised the areas north of the Peene and Ina rivers , including the towns of Demmin and Anklam on the south bank of the Peene, as well as the islands of Usedom and Wol (l) in north of the Stettiner Haff . The southern part of the whole of Pomerania formed the Duchy of Pomerania-Stettin.

The Duchy of Pomerania-Wolgast was founded in 1295 by Bogislaw IV . His son Wartislaw IV succeeded in acquiring the countries of Schlawe-Stolp in 1317 from the inheritance of the ducal house of the Samborids, which went out in 1295 . After the death of the Prince of Rügen Wizlaw III. In 1325 the Principality of Rügen fell to Pomerania-Wolgast.

In the years 1368 and 1372 the division of Pommern-Wolgast into Hinterpommern, which fell to Bogislaw V , and Western Pomerania, which went to the sons of Barnim IV., Brother of Bogislaw V, was decided. The third brother, Wartislaw V, initially received a severance payment, then Neustettin in 1372, which fell back to Pomerania-Wolgast after his childless death.

The University of Greifswald was founded in 1456 .

From 1478 to 1523 the two Pomeranian duchies were again united under Bogislaw X. As early as 1523, however, Pomerania was again divided into two duchies: Pomerania-Stettin and Pomerania-Wolgast. On December 13, 1534, at a state parliament in Treptow an der Rega , they both introduced the Lutheran Reformation . Johannes Bugenhagen was present as the main reformer in this state parliament.

After the settlement of May 15, 1368 in Anklam, which was confirmed in the Stargard Treaty on June 8, 1372, the Duchy of Pomerania-Stolp was established east of the Swine under Bogislaw V. After his death in 1374, his sons Casimir IV followed him . , who died in 1377, Barnim V and Bogislaw VIII. After his death in 1418, his widow Sophia von Holstein led her son Bogislaw IX until they came of age . the reign until 1425. After the death of Bogislaws IX. In 1446 Erich I returned to Rügenwalde in 1449 and resided there as Duke of Pommern-Stolp. After his death in 1459, Erich II , Duke of Pommern-Wolgast, also took over the rule in Rügenwalde-Stolp. After Erich II († 1474), his son Bogislaw X. united all of Pomerania under his hand and the name of the Duchy of Pomerania-Stolp ceased to exist.

End of the Duchy of Pomerania 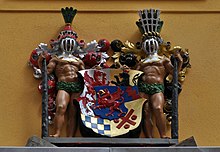 In 1630, Swedish troops occupied the whole of Pomerania during the Thirty Years' War . In 1637 Bogislaw XIV died childless as the last Duke of Pomerania. After the hereditary brotherhoods concluded in the Treaty of Pyritz in 1493 and in the Treaty of Grimnitz in 1529, the Elector of Brandenburg should have become Duke of Pomerania, but Sweden secured the possession of " Swedish Pomerania " with the capital Stettin and control of the Peace of Westphalia in 1648 Oder mouths . The elector had to be content with Hinterpommern ("Brandenburgisches Pommern" or from 1701 "Prussian Pomerania"). In the Reichstag until 1806, both the King of Sweden and the Elector of Brandenburg and from 1701 the Prussian King held the vote of the Duke of Pomerania . In the Peace of Saint-Germain in 1679 , Elector Friedrich Wilhelm had to return Swedish Pomerania, which he had conquered in the Northern War , to Sweden except for a strip of territory to the right of the Oder. It was not until the Peace of Stockholm in 1721 that Prussia, along with the part of Swedish Pomerania south of the Peene , gained control of the Oder estuary. As a result of the Congress of Vienna in 1815 the country was reunified as the Prussian province of Pomerania , which existed until 1945.