The title of this article is ambiguous. Further meanings are listed under Barby (disambiguation) .

Barby is a town in the Salzlandkreis in Saxony-Anhalt . Until the city was rebuilt on January 1, 2010 from the municipalities of the former Elbe-Saale administrative community (except Gnadau ), the city was called Barby (Elbe) . Gnadau was incorporated into Barby on September 1, 2010.

Mouth of the Saale

Barby lies on the left bank of the Elbe . About 3 kilometers southeast of the city the Taube flows into the Saale and this into the Elbe. The city forms the western border of the Middle Elbe Biosphere Reserve . To the north-west and south-east of the city are lakes created from former gravel mining.

Barby consists of the districts Colphus, Monplaisir, Weinbergsiedlung and Zeitz as well as the following villages: 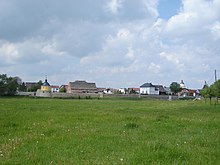 Barby is located immediately south of the Benrath line and thus at the transition from the High German - more precisely: the East Central German dialects to the Low German language . The Benrath line meets the Elbe here.

Barby was first mentioned on April 23, 961 in a document from King Otto I as "barbogi", which in Old High German means "place on the forestless river bend", literally: "bare arch". The city was surrounded by a wall with five city gates. Remnants of the city wall are still preserved. The Barby Territory was made an imperial county in 1497 and was owned by the Counts of Barby . These introduced the Lutheran Reformation in 1540 . After the death of the last Count of Barby in 1659, Barby fell to Duke August von Sachsen-Weißenfels , whose son Heinrich had the castle built from 1687-1715.

In 1660 Maria Kühne from Barby, called Fischer, widow of Andres Grosse, maid in the house of the ferry master Palm Gräfe, 73 years old, was involved in a witch trial as part of the witch hunt on charges of sickness . In the districts of Breitenhagen and Glinde there were another five proceedings.

For decades in the 18th century, Barby was the seat of the Evangelical Brethren Congregation (Herrnhuter Brothers Unity) and the leadership of the Moravian ’s worldwide mission . In 1749 the " Seminarium Theologicum " ( seminary ) of the Brethren was moved from Lindheim to Barby. One of the most famous students was Friedrich Schleiermacher , who attended the school from 1785 to 1787.

In October 1806 the French corps Bernadotte crossed the Elbe at Barby ("Heerstraße") on its way from Halle to Lübeck.

In the second half of the 19th century, Adolf Krummacher became the senior pastor in Barby, who became known as a hymn poet (“ Star I look at ”) and author of the student song “And when the swarm got lost”.

From 1920 the Maizena works in Barby were built.

At the end of the Second World War , the Protestant pastor Ludwig Fuchs, at the risk of his life, prevented the forcible capture of the city by US troops by affixing church flags and white cloths. According to another source, US ground troops captured the banks of the Elbe on April 13, 1945 after street fighting in Barby and were then able to build a bridgehead towards Zerbst on the other side of the Elbe.

In the local elections on May 25, 2014, 20 city councilors were elected. The election resulted in the following composition of the city council:

The coat of arms was approved on March 25, 1998 by the Magdeburg Regional Council.

The coat of arms was revised in 1998 by the Magdeburg local heraldist Jörg Mantzsch in the course of the flag approval after objection by the local authority. 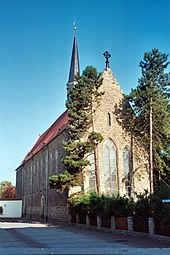 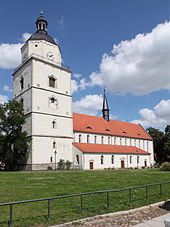 Manor house of the Barby domain, after 1868, Alexander Duncker collection (not identical to the castle)

Reception center in the castle (photo 1960) 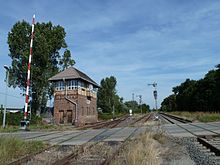 Railway bridge over the Elbe

Barby is connected to Schönebeck (Elbe) , Calbe (Saale) and the nearby Gierseilferry over the Elbe with Güterglück and the B184 .

The only passenger station in Barby today is the Sachsendorf (b Calbe) station on the Magdeburg – Leipzig railway line , which is served hourly by regional trains. The Barby station on the Berlin – Blankenheim line was served by a regional train on the Magdeburg - Schönebeck (Elbe) - Güterglück - Bad Belzig line until 2003 . However, passenger traffic on this route has now been discontinued. The station building, which was built as a yellow brick building in the style typical of the imperial era, is increasingly falling into disrepair.

From 1884 to 1922 the Patzetz – Breitenhagen horse-drawn tram ran in what is now the city of Barby , connecting the districts of Patzetz , Groß Rosenburg, Klein Rosenburg and Breitenhagen to the Sachsendorf station.

The port of Barby is located on the Elbe in the north of the city.

Since the 1920s, the Maizena works Barby produced glucose and corn starch; the factory was called "VEB Maisan-Werke Barby" in the GDR. In 1993, the Cerestar company ( taken over by Cargill in 2002) built a new wheat starch plant next to the plant closed in 1992 . In addition, the Maxit Baustoffwerke company is located in Barby, which is now part of Saint-Gobain Weber . The Elbe-Saale Clinic , a rehabilitation clinic for heart and circulatory diseases, is also worth mentioning .

Cities and communities in the Salzlandkreis