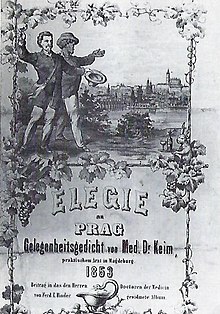 Karl Julius Keim (born January 18, 1823 in Barby , Province of Saxony , † January 14, 1906 in Magdeburg ) was a German doctor. In his time he was known as a medical and humorous writer. Adolf Siegl, the great chronicler of Prague student life, has erected a small memorial for him.

Keim studied medicine at the Friedrichs University in Halle . In 1844 he became active in the Corps Thuringia Halle (II). He was awarded Dr. med. Doctorate and licensed as a doctor in 1849 . Like many young doctors, he came to Charles University in the early 1850s . At its heyday in the middle of the 19th century, Prague's medical faculty attracted many more doctors from Germany, Switzerland and the Netherlands for practical training than the Viennese. Keim is neither in the lecturer's nor in the student register of Prague University. After the exams he opened a doctor's practice in Magdeburg. He played an outstanding role in the Magdeburg Medical Society. In Magdeburg, too, he pursued his inclination for forging. Most of his humorous poems played in the medical environment - "cheerful jokes at a cheerful feast", which he in the circle of friends of the Magdeburg Medical Society

his old mold,
his good Pegasus,
let them pull out of the stable.

His pseudonym “Supinator longus” is beautiful self-irony . The "long external turner" refers to the supinator muscle , which rotates the bent forearm outwards and brings the hand into a take position. Keim was a city councilor in Magdeburg for a while. Characterized as the secret medical council , he died four days before his 79th birthday.

On May 31, 1853, Keim wrote the Elegy to Prague in Ferdinand E. Binder's wine tavern on the Old Town Square . It is recorded in the Kommers books of the time as the “Prague Song” . It is said to have been sung after Prince Eugene, the noble knight . On the other hand, Paul Nettl proved that the medical song is based on a melody by Carl Kuntze . It is similar to the beginning of Beethoven's Andante favori (WoO 57). The owner of the Binder wine tavern had the elegy printed and presented it as a souvenir to the “Doctors of Medicine” who visited him. In the Kommers books the 3rd stanza relating to the building of chastity was reproduced in Greek letters; The German text was only published in later editions. In Prague, the women's departments were spatially separated at that time, obstetrics in the Kaiser Franz Joseph Pavilion and gynecology in one building on the aforementioned Windberg. Apolligen means the Gifthutte at St. Apollinaris .

Joseph Willomitzer , editor-in-chief of the German Bohemia , wrote a ninth stanza: In the German-Czech nationality conflict , it was an allusion to the custom of some Czechs to throw blown eggs filled with iron lacquer at the Habsburg black and yellow street signs.

Towards Prague, towards Prague,
you ought to, o muse horse, carry me,
where typhus is always rampant,
where there are boards white-blue-red,
yellow ones too - but the ones with feces
and smeared with iron lacquer.

When he was young, Keim had published a number of short stories . Long forgotten today, Der Frack , a one-act play , went over several stages in the 1850s. Two taunts and a series of lyric poems followed. Keim's contemporaries saw the Parasite Song as his best work. The song about “Flotten Burschen”, which he had written for the 25th foundation festival of the Magdeburg Medical Society, was felt to be just as successful. There is no evidence of Karl Julius Keim in the archives of the German Literature Archive in Marbach . It is listed in the World Biographical Information System Online (WBIS).