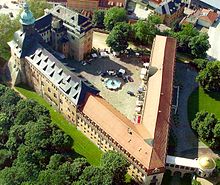 The total area of ​​the principality was 862.1 km². The territory was fragmented and divided into the supremacy , consisting of the spatially separated districts of Arnstadt and Gehren with the two exclaves Geschwenda and Rockhausen , as well as the sublordship with the districts of Ebeleben and Sondershausen , where the ancestral castle Sondershausen is also located. Other important places in the supremacy were Masserberg , Großbreitenbach and Plaue as well as in the subordination Greußen and Clingen .

The history of the principality goes back to the dynasty of the Counts of Schwarzburg , who were first mentioned in the 11th century. The Grafschaft Schwarzburg frequently changed its shape up to the 16th century through inheritance divisions and acquisitions. With the Stadtilmer Treaty of November 21, 1599 the Schwarzburg territories were redistributed. The two counties Schwarzburg-Sondershausen and Schwarzburg-Rudolstadt emerged . The territories were part of the Upper Saxon Empire . The two counties, later principalities and free states, remained essentially unchanged until 1920.

Johann Günther I (1532–1586) donated the Schwarzburg-Sondershausen line. In the Stadtilm Treaty of November 21, 1599, the heirs of Johann Günther and Albrecht VII of Schwarzburg-Rudolstadt shared the Schwarzburg areas. In the decades after 1599 there were further inheritance disputes. In 1681, Count Christian Wilhelm and Anton Günther II , who had ruled together until then, divided the country into a special house and an Arnstadt line. In 1713, the two main lines of Schwarzburg signed a family contract through which the primogeniture was introduced and further partitions of the country were forbidden.

Before that, both counts had been elevated to the rank of imperial prince and their country had been declared a direct imperial principality. Electoral Saxony , which claimed sovereignty over Schwarzburg, gave up its sovereign rights in the treaties of 1699 and 1702 in return for monetary compensation. However, in 1719 Schwarzburg had to commit to an annual payment of 7,000 thalers . For Arnstadt in 1731 the Duke of Saxe-Weimar was assured an annual compensation of 3500 Thalers.

Despite various reforms , there were also unrest in Schwarzburg-Sondershausen in 1848, which resulted in the suzerainty being occupied by Saxon troops and the sub-domination by Prussian troops in autumn 1848 . The liberal Friedrich Chop became head of the March government . On December 12, 1849, a liberal constitution was promulgated. By law of March 18, 1850, the state took over the administration of the chamber property, and the prince received an annual civil list of 120,000 thalers. On July 8, 1857, the constitution was reformed conservatively , and thus the previously curtailed princely rights were essentially restored.

When Schwarzburg-Sondershausen voted in 1866 against the mobilization against Prussia requested by Austria in the Bundestag of the German Confederation , the Principality joined the new North German Confederation , whereby in 1867 military sovereignty passed to Prussia. From January 18, 1871, the country belonged to the German Empire . In 1909, Prince Karl Günther von Schwarzburg-Sondershausen died childless, and the special houses line died out in the male line. According to the house contract of 1713, Günther Victor von Schwarzburg-Rudolstadt took over the rule. Efforts to create a state as a whole in Schwarzburg failed because of the conservative forces in Sondershausen. Only a few joint authorities and institutions were founded in Arnstadt . The First World War and further historical development ended these efforts.

At the end of the First World War, Prince Günther Victor abdicated as the last German monarch on November 25, 1918 , and the Principality was followed by the Free State of Schwarzburg-Sondershausen . In place of the princely government, a provisional ministry and a regional council headed by the state parliament president Wilhelm Bärwinkel .

The last prince died in Sondershausen in 1925, his wife Anna Luise von Schwarzburg died there in 1951. She was next to Duke Ernst II of Saxony-Altenburg and the divorced wife of Ernst II, Adelheid (1875–1971), the second former princess to stay in the GDR .

Constitution, political life and position in the German Reich

The constitution announced on July 8, 1857 and valid until the November Revolution - known as the Land Basic Law - provided for a state parliament with one chamber and a legislative period of four years. The sovereign could award (at most) six mandates by appointment for life - three each for supreme and subordinate rule. Another six MPs directly elected the 300 eligible voters who paid the highest direct state taxes in a single ballot. The remaining eligible voters elected another six MPs in general indirect elections. In these elections every male resident of the country who was 25 years old and had no tax debts was entitled to vote. Passive voting rights existed for male residents of the country after the age of 30. In addition to the MPs, the sovereign also had the right to introduce legislative proposals. The state parliament's budget rights were restricted; it was not allowed to refuse cover funds for certain expenses. The meeting place of the state parliament was Sondershausen.

All in all, it was a constitution that was one of the most backward in the empire. Structurally, it guaranteed a stable two-thirds majority of MPs, who only represented around 1% of the total population. In addition, the state parliament was deemed to have a quorum when two thirds of the members of the parliament were present. This meant that the 12 MPs determined by appointment or via the electoral census could, if required, establish a quorum at any time by moving out or absenteeism, while this was not possible for the six MPs determined by general elections. Any change to the state constitution required the approval of two thirds of the MPs - and was thus de facto excluded (at least in the direction of liberalization and democratization). The administration and the conservative majority of the state parliament stubbornly stuck to the established state election law until the end. In 1916 they let the last serious Rudolstadt initiative to consolidate the Black Burgess principalities in one state fail due to this question. It was not until November 12, 1918, that the state government and the majority of members of parliament spoke out in favor of introducing universal, free and equal voting rights - and only to take the pressure off the revolutionary pressure (not without success, as a look at the shows further development).

Schwarzburg-Sondershausen had one vote in the Federal Council and sent one member to the Reichstag (constituency 371). The Reichstag elections in the principality since 1890 were mainly disputes between social democrats - who could only organize legally since 1908, since political workers' associations were banned in the principality up to then - and national liberals . The latter - although the SPD was clearly the strongest party in the 1912 Reichstag election with 44.8% of the votes in the first ballot - regularly won the mandate, as all conservative voters stood behind them when the runoff election was due to prevent a Social Democratic MP . From 1903 to 1918 Felix Bärwinkel represented the constituency in the Reichstag. The anti-Semitic parties were noticeably strong, receiving 25.3 % of the vote in 1903 ( German Reform Party ) and 19.9% ​​in 1912 ( German Social Party ) (1912 in the Reich: 2.5%).

The Principality joined the Dresden Mint Treaty in 1838 . Two thalers in the Prussian 14 thaler coin footer now corresponded to 3½ south German guilders in the 24½ guilder foot, which was to be considered the common association coin of the "contracting states". This club coin of "2 Taler = 3½ guilders" was legally valid in every Zollverein country - regardless of who the respective issuer of the club coin was. From 1841, Schwarzburg-Sondershausen minted its own coins for the subordinate Sondershausen in the Prussian mint (1 thaler at 30 silver groschen at 360 pfennigs), Berlin mint 1841–1909. The principality decided not to issue its own coins for the Arnstadt sovereignty (Rudolstadt coins were in circulation). It was only with the introduction of the mark as imperial currency on January 1, 1876 under the law of December 4, 1871, that the fragmentation of the monetary system was lifted.

The Thurn-und-Taxis-Post secured the post office shelf through contracts with the Schwarzburg principalities :

The sublords of Sondershausen and Frankenhausen were administered by the Prussian post office.

The common administration could already be recognized from the outside by the name, the postal coat of arms and the uniforms, which differed by different collar colors. The name of the post office was: “Fürstlich Schwarzburg-Sondershausensche, Fürstlich Thurn und Taxissche Lehenspostexpedition”. The postal coat of arms therefore combined both coats of arms, below the Schwarzburger, above the princely Thurn and Taxissche. From 1852 to 1866, the Thurn-und-Taxis-Post issued its own postage stamps in two different currencies. The supremacy belonged to the southern district with cruciform currency. From 1867 the post office shelf passed to Prussia, which - like the North German Confederation - issued stamps in Groschen and Kreuzer currency until the introduction of the Reich currency in 1876.

Schwarzburg-Sondershausen was the only state in Thuringia that did not appeal to the joint higher regional court in Jena .

For details of the judicial system, see Courts in the Principality of Schwarzburg-Sondershausen .

As a member of the German Confederation , the principality provided a contingent of 351 infantry and belonged to the 10th battalion of the reserve division of the armed forces . The contingents of both principalities together formed a battalion. In Rudolstadt and in Sondershausen there were two companies each, of which only one sixth were regularly present. It was not until 1850 that the number of troops was doubled, so that each royal house now provided a battalion.

In the German Empire, after the military convention concluded with Prussia on February 4, 1867, the principality's contingent formed part of the 3rd Thuringian Infantry Regiment No. 71 in Erfurt, which belonged to the 4th Prussian Army Corps in Magdeburg and of which a battalion was garrisoned in Sondershausen lay.

The coat of arms of Schwarzburg-Rudolstadt is the same as that of Schwarzburg-Sondershausen, only the field of regalia differed in the two principalities. Blazon of the large national coat of arms: the shield holder of the coat of arms is on the left (heraldic right) a wild man , on the right (heraldic left) a female counterpart. The main shield is split and is covered by a narrow, blue-gold-black diagonally arranged cross that extends to the base of the shield (The cross comes from the title of "Four Counts of the Empire", which the Counts of Schwarzburg led since 1356 and that of the German emperors in 1518, 1566, 1576, 1612 and 1638 was renewed or confirmed.).

The counts and princes of Schwarzburg-Sondershausen 1571 to 1909

After the establishment of the German Empire in 1871 , there was also increased industrialization in the Principality of Schwarzburg-Sondershausen and, as a result, strong population growth , which is as follows:

Places with over 2000 inhabitants

Besides the traditional agriculture and in the wooded district Miter operated forestry of the 19th century saw many industrial manufacturing operations in the principality in recent decades. Worth mentioning are the potash mines in the subordinate rule, the manufacture of textiles and gloves (in Arnstadt) and the earthenware and porcelain industry , especially in the upper rule. In 1907 28.7% of the workforce worked in agriculture, 48.2% in industry (for comparison: Prussia 42.76%) and 9.8% in trade and transport.