Hohenzollern existed since 1634 from the two lying separated parts of the country Sigmaringen and Haigerloch , 1802 there came the front of the monastery Muri belongs dominion smooth on the upper Neckar to 1806, among other areas, the former to rule Trochtelfingen belonging area around Ringingen , Salmendingen and Melchingen as an exclave , with a total area of ​​906 km². The three areas were separated from the Principality of Hohenzollern-Hechingen . The eight exclaves Thalheim , Thiergarten , Igelswies , Tautenbronn , Mühlhausen , Langenenslingen , Bärenthal and Achberg -Esseratsweiler also belonged to the principality . Neighboring countries were Württemberg in the north-east and Baden in the south-west .

The area around Haigerloch, the north-western part of the country, which was at times independent as Hohenzollern-Haigerloch , lies mainly on a layer of shell limestone upstream of the Swabian Alb . This area is drained by the Neckar and its tributaries Glatt , Eyach and Starzel .

The area around Ringingen, Salmendingen and Melchingen, only a few square kilometers in size, is located on the plateau of the Swabian Alb at an altitude of between 800 and 900 meters. The source of the Lauchert is located near Melchingen .

The area around Sigmaringen lies on the Swabian Alb and on the Molasse area to the south . The Danube flows through the area from west to east, tributaries here are the Schmeie , Lauchert and Ablach .

The Counts of Zollern can be safely traced back to the 11th century. A descent from the Swabian family of the Burchardinger was often suspected in ancient literature, but cannot be proven. At the beginning of the 13th century the sex was divided into a Swabian and a Frankish line. The Frankish line, which the Burgraviate of Nuremberg held, was later elevated to the position of Elector of Brandenburg . Hohenzollern-Sigmaringen was part of the Swabian Empire until 1808 .

Princess Amalie Zephyrine one was at the beginning of the 19th century Mediatisierung by Napoleon prevent. In 1806 he created the Rhine Confederation and thus finally smashed the Holy Roman Empire . The two royal houses of Hohenzollern, Sigmaringen and Hechingen, managed to maintain their sovereignty and, in the case of Sigmaringen, also experienced a considerable increase in territory. In 1806 the Principality of Sigmaringen received the possessions of the Habsthal and Wald monasteries and the Teutonic Order of Achberg and Hohenfels . It also gained sovereignty over the Princely Fürstenberg rule in Jungnau and Frohnstetten , the Thurn and Taxis rule in Ostrach and Straßberg, and over the Speth rule in Gammertingen and Hettingen .

The Hohenzollern-Sigmaringen family continued to play an important role even after the Prussian takeover. Karl Anton von Hohenzollern-Sigmaringen's eldest son Leopold was offered the takeover of the Spanish throne in 1870 . This became the occasion of the Franco-German War . His brother became King of Romania as Charles I and founded the ruling dynasty from 1866 to 1947. Her sister Stephanie became Queen of Portugal .

To date, there are the Sigmaringen Castle , a third of the Hohenzollern Castle , the Castle Umkirch , the hunting lodge Josefslust and Krauchenwies castle owned by the royal house; Namedy Castle has a side branch . For Group Prince of Hohenzollern , based in Sigmaringen heard the Zollern GmbH & Co. KG , one of the largest employers in the district of Sigmaringen . In 2015, Zollern employed around 3,000 people in 22 plants and branches worldwide. The current head of the house, Karl Friedrich von Hohenzollern , as the sole shareholder and chairman of the advisory board of the Prinz von Hohenzollern Capital GmbH & Co. KG , also owns a number of company investments.

The Principality of Hohenzollern-Sigmaringen was divided into various Hohenzollern senior offices . In 1822 there were the upper districts Sigmaringen , Wald , Ostrach , Straßberg , Gammertingen and Haigerloch as well as the senior bailiffs Achberg , Hohenfels , Jungnau and Trochtelfingen . At the transition to Prussia, the upper offices of Gammertingen, Ostrach, Sigmaringen, Trochtelfingen and Wald still existed. Hohenzollern-Sigmaringen was purely rural with a mostly Catholic population. There were Jewish communities in Haigerloch and Dettensee.

For the judiciary, see the list of courts in the Principality of Hohenzollern-Sigmaringen . 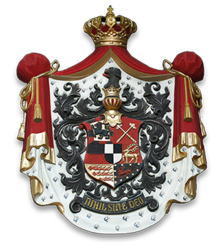 Coat of arms currently used by the Princely House

Head of the Princely House of Hohenzollern (since 1869) 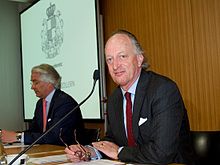 Karl Friedrich von Hohenzollern , the current head of the house 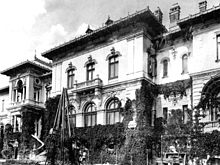 In February 1866, Prince Karl Eitel Friedrich von Hohenzollern-Sigmaringen (1866-1914), the second son of Prince Karl Anton von Hohenzollern-Sigmaringen , on the recommendation of Napoleon III. and after a referendum on April 20, 1866 elected Prince of Romania . On November 15, 1869, he married Princess Elisabeth zu Wied (1843–1916). After Romania achieved independence from the Ottoman Empire in the Peace of San Stefano in 1878 , Charles was proclaimed King of Romania on March 26, 1881. Carol and Elisabeth's only child was their daughter Maria, who died in 1874 at the age of three. When King Carol died on October 10, 1914, his nephew Ferdinand I , a younger son of his brother Prince Leopold von Hohenzollern , succeeded him. In 1927, his son Crown Prince Carol was forced to abdicate and his underage son Mihai I (Michael I, 1927–1930, 1940–1947) became king. However, his father ascended the throne in 1930 as Carol II (Karl II, 1930–1940). He ruled until September 6, 1940, when Michael I was again proclaimed king. After the end of the Second World War, Michael continued to rule as head of state with severely restricted powers until he was forced to abdicate and leave the country on December 30, 1947 by the ruling Romanian Communist Party . After decades in exile in Switzerland , the ex-king was allowed to return to Romania after the fall of the Ceaușescu regime in 2001 and was given the right to live in the Elisabeth Palace in Bucharest for himself and his family, as well as the restitution of the property in the Săvârșin , Peleș and Pelișor castles .

Family after the monarchy