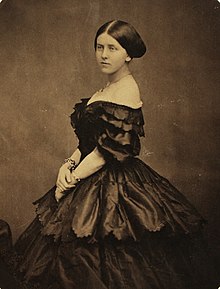 Stephanie was born as the daughter of Prince Karl Anton von Hohenzollern-Sigmaringen (1811–1885) and Josephine (1813–1900), daughter of Grand Duke Carl von Baden , at Krauchenwies Castle . She had five siblings, including the future King Carol I of Romania and the Spanish pretender Leopold . Until her marriage, Stephanie lived with her family in Düsseldorf , where her father, the last sovereign of the Principality of Hohenzollern-Sigmaringen , in the function of a Prussian divisional commander, had moved into Jägerhof Palace when Stephanie was 15 . The princess was trained artistically by Heinrich Mücke in painting and by Clara Schumann on the piano. She married King Peter V (1837–1861) of Portugal on May 18, 1858 in Lisbon . The couple's engagement had already taken place in December of the previous year in Düsseldorf. Her brother Leopold and the Prussian master of ceremonies Rudolf von Stillfried-Rattonitz had accompanied them to Portugal . The latter received the elevation as Count of Alcantara to the Portuguese grandee .

Arrival of Princess Stephanie von Hohenzollern-Sigmaringen in Lisbon in 1858 for her wedding. (Painting by João Pedroso ) , in the background the Torre de Belém

Stephanie died a year after the wedding, deeply mourned by the Portuguese population, at the age of 22 of diphtheria , which left Peter V in severe depression. Because of her untimely death, her marriage to Peter remained childless. Her husband died just two years after her. 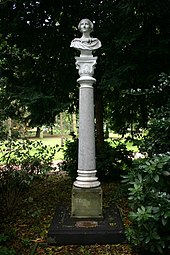 Memorial to Princess Stephanie von Hohenzollern in the Hofgarten (Düsseldorf)

Stephanie is buried in the Braganza pantheon of the São Vicente de Fora monastery in Lisbon.

In Düsseldorf and later also in Lisbon, the charitable Stephanie was known to people as the “angel of the poor”. Just one year after her death, a memorial was erected for her in Düsseldorf: the bust of the queen on a black marble column was created by Schadow's student Julius Bayerle . The monument to Princess Stephanie von Hohenzollern was renewed in 1890 by the sculptor Josef Tüshaus . In 1859, the lyricist Wolfgang Müller von Königswinter wrote a poem lamenting Stephanie's death.

Every year on the second Sunday in May, Düsseldorf's shooters commemorate the queen on St. Stephen's Day. In the center of Düsseldorf, Stephanienstraße (Klosterstraße to Leopold-Straße) is reminiscent of the Hohenzollern family, and a hospital in central Lisbon is named after Stephanie. Citizens of Düsseldorf and Lisbon donated a bust to what is now the Portuguese Foreign Ministry . A memorial plaque is on the garden front of Jägerhof Palace in Düsseldorf.