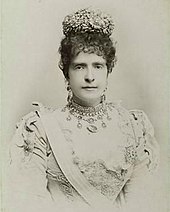 Maria Pia was born as the daughter of Victor Emanuel II , King of Sardinia-Piedmont (later the first King of Italy ) and the Archduchess Adelheid of Austria . She had seven siblings, including King Umberto I of Italy and Amadeus of Savoy , King of Spain . Pope Pius IX was her godfather.

Maria Pia lost her mother at the age of seven. When she was only a 14-year-old girl, King Ludwig I of Portugal sent envoys to ask for her hand. After her long-distance marriage in Turin on September 27, 1862, she immediately traveled to Portugal, arrived there on October 5 and married the next day, October 6, 1862, in Lisbon, nine years older, Louis I. She became Queen of Portugal . In 1863 she gave birth to the future King Charles I of Portugal and in 1865 to Prince Alfons Heinrich , Duke of Porto .

As Queen, Maria Pia sported a penchant for luxury, parties and costume balls . In particular, she attached great importance to elegant clothing, which earned her massive criticism from the anti- monarchist press in the last few years of the Portuguese monarchy because of her exorbitant spending on fashion. Allegedly, she is said to have met the repeated accusations with the quote, famous in Portugal: "Whoever wants queens should also pay them" ( Quem quer rainhas paga-as ).

Maria Pia was also active in charity and campaigned for the abolition of slavery in the Portuguese colonies, which actually took place in 1868 . It also carried out successful relief operations during the great floods of 1876, which was even applauded by the political opposition. However, she rarely got involved in politics. She was Grand Master of the Order of Saint Isabella .

After the death of her husband Ludwig I on October 19, 1889 and the subsequent accession of her son to the throne as Karl I, Maria Pia devoted herself intensively to her social projects, which had been important to her as the king's wife. She assumed a dominant position at the court and served as regent during the absence of the new royal couple.

On February 1, 1908, Charles I and the Hereditary Prince Ludwig Philipp died in an assassination attempt. Maria Pia was deeply shocked by the violent death of her son and grandson. During her final years in Portugal, she began to show signs of senility and rarely appeared in public.

Deeply upset about the deposition of her other grandson Manuel II and the dissolution of the monarchy on October 5, 1910, Maria Pia went into exile in Italy with the rest of the royal family. There - in her original homeland - she found refuge with her sister-in-law Margarethe . Mournful and suffering from arteriosclerosis , the queen widow died on July 5, 1911 at the age of 63 of heart disease and, like most of the later members of the House of Savoy, was buried in the royal mausoleum in the basilica of Superga near Turin.

The Ponte Maria Pia , built near Porto in 1877 , bears her name. Two hospitals were also named after her, the Maria Pia Hospital in Porto , which opened in 1882, and the Josina Machel Hospital in Luanda , Angola between 1883 and 1977.

Maria Pia of Savoy had two sons with Ludwig I of Portugal: