Coat of arms as the Grand Duke of Baden

Karl Ludwig Friedrich was the son of Karl Ludwig von Baden and Amalie von Hessen-Darmstadt . As early as the age of 25 he was taken into government responsibility after his grandfather Karl Friedrich died in 1811. Karl's father had a fatal accident as early as 1801 on the return journey from Russia near Arboga ( Sweden ).

As a young ruling prince, Karl soon found himself placed between strongly divergent parties. Political opponents from the higher circles of the nobility and the church, who made it very difficult for him to govern autonomously with their fundamental demands. On the one hand, since his marriage to Napoleon's adopted daughter - Stephanie Louise Adrienne de Beauharnais - in 1806 , Karl had always had to prove himself docile to the French emperor, ultimately becoming his son-in-law. On the other hand, there were also the interests of the German princes in the German Confederation, and later also of the princely participants in the Vienna Congress of 1814/1815. In addition, as early as the beginning of the nineteenth century there were efforts to form associations, to liberalize or democratize within the Baden people, but they contained all the innovations whose health effects on the Baden people had to be decided individually. So were z. B. contested the strict conditions of the Baden press law, which were set during the reign of his grandfather - Karl Friedrich von Baden. After intensive consultation - u. a. with the councilors and also with his teacher, the court preacher Johann Leonhard Walz - Karl left it unchanged for the time being.

The fact that he has been classified as weak by outsiders / historians is more likely to be attributed to his judicious behavior than to any weakness in character. In accordance with the nature of his person, his behavior indicated rather subtle and circumspect judgment than a harsh extroversion. This will u. a. attested by contemporary State Councilor Wilhelm Reinhard.

But the Grand Duke could also be very strong-willed. When he ended the alliance with Napoleon in 1813 and switched to the alliance of Napoleon's opponents, they demanded that Karl should separate from his wife Stephanie de Beauharnais. He refused to separate, although she had apparently not given birth to any healthy male heirs and the marriage had not been very happy in the first few years. His refusal could have had serious consequences if he had not been the brother of the Russian Tsarina Elisabeth Alexejewna (née Louise von Baden ). The Tsarina stood up for her homeland with her husband and thus helped to secure the existence of the Grand Duchy.

Shortly before his death, Grand Duke Karl Ludwig Friedrich von Baden officially secured the succession for the then grand ducal house of Baden both internally and externally. He also left the state of Baden with the most modern constitution at the time (1818) .

Events during his tenure 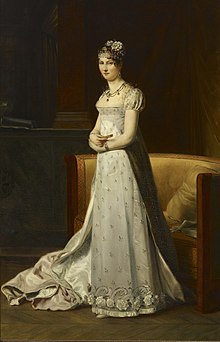 Karl had no surviving male descendants. That is why his uncle Ludwig I took over the throne after his death in 1818 .

Note: Due to inter-family marriages, Landgrave Ludwig VIII of Hessen-Darmstadt and his wife Charlotte are two-time great-grandparents of Karl.