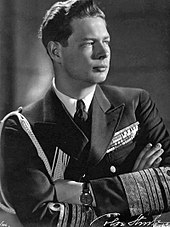 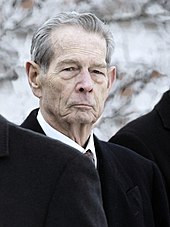 Michael I was born as the son of the Romanian heir to the throne Prince Karl (Rum. Carol) and his wife Princess Elena of Greece and Denmark in the Carpathian town of Sinaia. His father was excluded from the line of succession in 1926 because of his life in favor of his son. At the age of five, Michael I (Rum. Mihai I.) ascended the Romanian throne in 1927 after the death of his grandfather Ferdinand . The affairs of state at this time were carried out by his uncle Prince Nikolaus and a regency council.

However, Karl returned to Romania from his exile in Paris on June 6, 1930 and ascended the throne as Carol II . After he came under increasing domestic political pressure due to territorial losses during his reign ( Bessarabia , North Bukovina , South Dobrudscha and - after the second Vienna arbitration on August 30, 1940 - North Transylvania ), Michael became king again on September 6, 1940 called out. Although he was de jure ruler again, the actual power to govern was held by the general and Ion Antonescu, who was proclaimed “leader” ( Roman conducătorul ) . From the end of 1941 there were increasing tensions between Michael and Antonescu.

During the Second World War , Romania joined Germany in the war against the Soviet Union. When the Red Army launched a major attack on Romania in the summer of 1944 , Michael dismissed Antonescu after the royal coup on August 23, 1944, switched sides and declared war on the German Reich on August 25. He hoped that his cooperation with the USSR would bring about a quick peace agreement, but the Red Army initially occupied all of Romania before a peace treaty was signed on September 12th.

After the end of the Second World War, Michael continued to rule as head of state with severely restricted powers until he was forced to abdicate and leave the country on December 30, 1947 by the ruling Romanian Communist Party .

Until the fall of the Ceaușescu regime , Michael lived in exile in Switzerland , where he earned his living by raising poultry, as a test pilot and as a stockbroker. On December 25, 1990, after 43 years in exile, he traveled to Romania for the first time, equipped with a Danish diplomatic passport and a 24-hour visa, to attend the Christmas service in the Cathedral of Curtea de Argeș and to pray at the graves of his ancestors . On the way, however, he was stopped by the police and taken back to the airport. In 1992, with government approval, he returned to attend the Easter celebrations. In Bucharest, over a million people took to the streets to see him. President Ion Iliescu , who was alarmed by the ex-king's unexpected popularity, then again banned him from entering the country. Only his successor Emil Constantinescu gave him back his Romanian citizenship and thus the right of residence five years later.

In the course of the law regarding the status of the former head of state, Michael was granted the right to reside in the Elisabeth Palace in Bucharest under President Traian Băsescu in 2001 , which was built in 1936 for his aunt Elisabeth and which he himself enforced after the fall of Antonescu from 1944 until his Abdicated in 1947 to live in the city center, as the Cotroceni Castle , which had been inhabited up to that point, is a bit outside.

Regarding Romania's relationship with Moldova , Michael stated in 2001: “We have no territorial claims against our neighbors. But we can not tolerate attempts to rewrite our history by stating that Romanians living outside our country, belonging to another nation or speaking another language will not tolerate. "

In the same year Michael applied for the restitution of the Peleş , Pelişor , Foişor castles , their art collections and twenty other properties in Sinaia , which had been confiscated and nationalized by the communist regime in 1948 . In 2004 the Romanian government passed a bill on compensation of 30 million euros. However, in November 2005 the Romanian Constitutional Court ruled that the Financial Compensation Act was unconstitutional. Michael's official return to the castles Peleş and Pelişor took place on June 5, 2008. The two castles are still used as museums, while the Săvârşin Castle , which was also restored to him , was used for celebrations. Michael lived with his wife in Aubonne , Switzerland, since 2004 .

In 2005 Michael and his wife Anna went on a journey together in the footsteps of the Romanian soldiers who died in Slovakia and the Czech Republic at the end of World War II.

On January 27, 2006, Michael's one year older half-brother Carol died in London. He was the son of Carol II from his first morganatic marriage to Zizi Lambrino .

At the beginning of March 2016, Michael retired from public life due to illness due to chronic leukemia and metastatic squamous cell carcinoma . He spent the last months of his life under intensive medical care in his Swiss residence, where he died on December 5, 2017. After his death Michael was buried in the Cathedral of Curtea de Argeș .

Historically, Michael belonged to the Romanian Hohenzollern family . The first Romanian king Karl I or Carol I (1839-1914) was a son of Karl Anton von Hohenzollern , the last ruling prince of Hohenzollern-Sigmaringen . On May 10, 2011, the now 89-year-old former king and the members of his house dropped the suffix “von Hohenzollern-Sigmaringen” and have been calling themselves “von Romania” ever since. The background for the separation was evidently disputes over a title of nobility: A Romanian court recognized a relative of Michael's from the title "Prince of Hohenzollern". As a result, Michael broke off the relationship with Sigmaringen that had already been described as "not close". 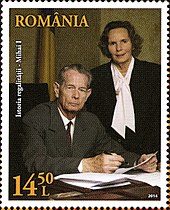 Michael and Anna on a Romanian postage stamp (2014)

On June 10, 1948, he married Anna from the Bourbon-Parma house . The couple had five daughters, all of whom were born in exile:

"Majestatea Sa Mihai I, Regele Românilor" ( German  His Majesty King Michael I of the Romanians )

In 1945 Michael was awarded both the Order of the American Legion of Merit and the Soviet Order of Victory . On May 10, 2007, Michael received the Hanno R. Ellenbogen Citizenship Award . Since April 8, 2008 Michael was an honorary member of the Romanian Academy .

The loyalty medal awarded by Michael serves to recognize services to the former royal family and is awarded to a maximum of 250 living personalities.

In July 2011, Romanian President Traian Băsescu expressed his controversial opinion that the former king was a “traitor” and “servant of the Russians”, and also complicit in the Holocaust in Romania . During the Second World War, around 211,000 Romanian Jews were deported to concentration and extermination camps or shot . A commission of experts appointed by Băsescu in 2006 had dealt with the effects of the communist dictatorship and praised the historical role of the former king, particularly in connection with the arrest of Antonescu. The Romanian German writer William Totok described the statements of Băsescu as "scandalous". The daily newspaper Die Welt commented on the remarks as a contradiction to "guaranteed historical facts".

The veneration of Antonescu and the degradation of Michael I is part of the ideology of both Romanian right-wing radicals and supporters of the former communist secret police Securitate .

The Bucharest Parcul Regele Mihai I al României is named after him.

Commons : Michael I of Romania  - Collection of images, videos and audio files