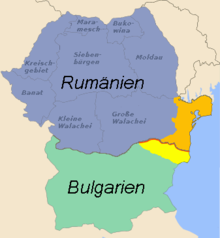 The Dobruja region today: yellow in Bulgaria , orange in Romania

The Dobrudscha ( Romanian Dobrogea , Bulgarian Добруджа (Dobrudža) , Turkish Dobruca ; also Trans- Danubia ) is a historical landscape in southeastern Europe between the lower reaches of the Danube and the Black Sea . The landscape forms the border area between Southeast Romania and northeastern Bulgaria .

The Dobruja is the northeastern tip of the Balkan Peninsula and covers an area of ​​23,262 square kilometers with around 1,328,860 inhabitants (971,643 in Romania and 357,217 in Bulgaria). The Romanian area is 15,570 square kilometers. The Dobrudscha is 467 meters high in the iatu ( uiatul ( Greci ) in the northwest; south of the Cernavodă - Constanța depression , it is a loess-covered , fertile plaque that rises up to 200 meters high.

The biggest cities are Constanța and Tulcea (in Romania) and Dobrich and Silistra (in Bulgaria).

The Dobrudscha is politically divided into the Romanian North Dobruja and the Bulgarian South Dobruja.

The North Dobruja (Romanian: Dobrogea de Nord , Bulgarian: Северна Добруджа ) is now an area in southeast Romania and the country's only access to the Black Sea. The area is 15,570 square kilometers (6.5% of the area of ​​Romania) and has a population of 973,811 inhabitants.

The Norddobrudscha is a flat coastal strip with many wetlands in the northern part and the estuaries -Lakes the Danube. Further inland, the area is slightly hilly and forested and forms the Dobruja Highlands ( Podișul Dobrogei ). 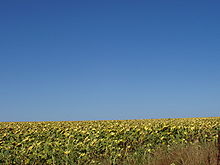 A sunflower field in the south Dobruja near Shabla

On average, the south Dobruja is 230 m above sea level. Much of the coast on the Black Sea is steep. The alternation between wetlands and steppe areas is typical and unique.

Map of the Despotate Dobruja 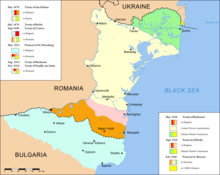 Historical borders in the Dobruja

The oldest Neolithic culture in the region is the Hamangia culture . Because of the decoration of the ceramics , some archaeologists consider it to be a side line of the cardial or imprint culture . Their successor was the Gumelnitza culture .

In the 1st millennium BC The Scythian horsemen lived in the area of ​​today's Dobrudscha, which is why it was also called " Little Scythia ". Until about 500 BC The Persians ruled the country. Around 650 BC The first Greek colonies arose in the area. Fortified cities such as Tomis (now Constanța ), Callatis (now Mangalia ) and Histria were built. Subsequently, the area belonged to the Dacian Empire of Burebista . 280 BC The Celts invaded the area. In 46 AD the Romans conquered the area and held it until 387 AD. After that, the Goths came until the Avars sacked the land in 587 AD. In the 6./7. In the 19th century, the Slavs invaded . The once flourishing settlements were destroyed by invasions by steppe peoples . In 679 the First Bulgarian Empire and its capital Pliska were founded there. The war expeditions of the Pechenegs in the first third of the 9th century devastated and depopulated large parts of the rural areas of the Dobruja.

In 971 the area fell to the Byzantine Empire, to which it belonged for around 200 years. Byzantine rule was shaken off in 1186 and the Second Bulgarian Empire came into being . In the 13th century, the area suffered greatly from expansion attempts by the Tatars and slave raids by the Genoese .

In view of the dwindling central power in Tarnowo , the boyare Balik founded a largely independent Bulgarian empire in the 14th century, the despotate Karwuna named after its capital . The later name Dobrudscha was possibly after Balik's brother Dobrotitsa.

Due to the defeat of the crusaders led by King Sigismund against the Turks in the Battle of Nicopolis , Bulgaria fell to the Ottoman Empire by 1396. In the Dobruja, the Ottomans only established themselves permanently from 1417 and organized the area administratively as the Sanjak of Tulcea. The Ottoman Empire settled Turks and Tatars in the depopulated area (see Islam in Romania ).

In the six Russo-Turkish Wars between 1768 and 1878, including the Russo-Turkish War (1806-1812) and the Crimean War (1853-1856), there were also fighting in the Dobruja area. From 1878 ( Berlin Treaty ) the (significantly larger) northern part came to Romania. Romania began state colonization in Dobruja, during which many Turks left the country by 1885. The capital was moved from Tulcea to Constanța. With Constanța, Romania now had an ice-free Black Sea port, which was quickly expanded. The Bulgarian southern part was annexed by Romania in 1913 as a result of the Second Balkan War (in the Bucharest Peace Treaty ), temporarily ceded to Bulgaria again in May 1918 and returned to Romania in the Treaty of Neuilly-sur-Seine at the end of 1918 . In 1940 it was given back to Bulgaria in the Craiova Treaty.

In the 19th century, German colonists immigrated in waves to the poorly populated area of ​​Dobruja. The first settlers came from the Russian Empire between 1841 and 1856. These were mainly German farming families from the neighboring governorates of Bessarabia and Kherson . In the course of the one hundred years of settlement history of these colonists, the ethnic group of the Dobruja Germans was formed .

Before 1940, a colorful mixture of Romanians, Bulgarians, Turks, Tatars, Lipovans , Roma , Greeks and Germans lived together. During the interwar period, the Komitaji of the Inner Dobrujan Revolutionary Organization were particularly active in southern Dobruja Cheetah . From the Bulgarian point of view they were freedom fighters, from the Romanian point of view they were bandits.

Since 2004, the landscape has given its name to the Dobruja Glacier on Livingston Island in Antarctica.

The wind energy is playing an increasingly important role. A large number of wind farms are being built in Dobruja due to the high average wind speeds , including Europe's largest onshore wind farm with 240 wind turbines and 600 MW installed capacity .

Portal: Dobruja  - Overview of Wikipedia content on the topic of Dobruja