Hinterpommern is the larger eastern part of Pomerania located between the Oder and Pommerellen in West Prussia . Since the border shifts as a result of the Second World War in 1945, this part has been entirely on Polish territory. Hinterpommern together with Vorpommern, which is almost entirely on the German side, formed the province of Pomerania . Today, the area of ​​Hinterpommern is mainly in the West Pomeranian Voivodeship . The eastern part belongs to the Pomeranian Voivodeship .

The region of Hinterpommern was almost completely inhabited by Germans until 1945 and, as part of the Prussian province of Pomerania, belonged to the German Empire until the end of the Second World War . Since then, this region has been inhabited almost exclusively by Poles .

In the hinterland of the Baltic Sea coast , traffic flows from Szczecin to Gdansk .

Coat of arms of the gripping
→ Main article : History of Pomerania

Western Pomerania was part of the settlement area of ​​the Pomorani (Pomerani). The latter name first appeared at the time of Charlemagne. After military campaigns for submission and Christianization , the whole of Pomerania was under the rule of the Polish Duke Bolesław III from 995 . Guilty mouth. The Polish sovereignty slipped from his successors again and ended around 1135. The originally Slavic griffins (since Wartislaw I ) were dukes of Pomerania until 1637. They recruited German settlers to colonize their lands, so that in the 13th century initially the western the parts of the country situated on the Oder, but later also the eastern parts became part of the German settlement area. The remaining Slavic population was largely Germanized in the course of time.

Many aristocratic families from the Pomerania region who lived there until they were expelled after 1945 have Slavic roots. B. that of Zitzewitz or that of Borcke . Only in eastern Pomerania did a Slavic population group, the Kashubes, survive until modern times. Their assimilation since the 18th century led to either Germanization (Evangelical Church) or Polonization (Catholic Church) , depending on the faith of the Church to which they had joined . Despite “Germanization” or “Polonization”, the Kashubian language survived to this day.

From 1295 to 1464 the southwestern Pomerania (the entire region southwest of the Ihna River ) belonged to the Duchy of Pomerania-Stettin . The other areas belonged at this time to the Duchy of Pommern-Wolgast , from which a separate Duchy of Pommern-Wolgast-Stolp had been divided since the end of the 14th century . The areas on both sides of the lower reaches of the Persante with the cities of Kolberg and Köslin have essentially formed the Cammin monastery since the end of the 13th century, i.e. the secular dominion of the Bishop of Cammin . 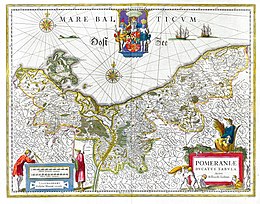 Western Pomerania in the Duchy of the Griffins

After a temporary unification of the different parts of the country under Duke Bogislaw X. , reg. 1474–1523, his successors already divided the country provisionally in 1532 and finally in 1541 into a Duchy of Wolgast and a Duchy of Stettin, which could only be reunited from 1625 under the last Duke, Bogislaw XIV . This time, the Szczecin part-duchy primarily comprised the areas east of the Oder, which had been expanded to include the Lauenburg and Bütow lands in the east since 1466 . The latter, however, lay outside the borders of the Holy Roman Empire of the German Nation and were initially pledged, and since the beginning of the 16th century a fiefdom of the Polish crown. After the Reformation, from 1556 onwards, the Cammin monastery became a secondary school for the Pomeranian dukes. In 1648, with the exception of a strip on the eastern bank of the Oder and Dievenow , Hinterpommern came to Brandenburg-Prussia as a result of the Peace of Westphalia and remained within the Prussian state from 1815 to 1945 as part of the Pomerania province .

In March 1945, the Red Army had conquered Western Pomerania and placed it under the administration of the People's Republic of Poland . In August 1945 the Western Allies confirmed this in the Potsdam Agreement and agreed to the beginning of the displacement of the population. After 1945, Hinterpommern was mainly settled with Poles from central Poland and areas east of the Curzon Line and, as part of the Vistula campaign, also with Ukrainians from areas west of the Curzon Line.

The East Pomeranian affiliation to Poland was confirmed by the GDR in the Görlitz Agreement of July 6, 1950, by the Federal Republic of Germany, with reservations, in the Warsaw Treaty of December 7, 1970, and by the unified Germany in 1990 in the Two-Plus-Four Treaty and in the German-Polish Treaty Border treaty finally recognized.

To the east of Stolp, the Kashubian language was also represented, and since the 17th century, as a result of the recatholization in the area around Leba and Lauenburg, the Polish language .

Due to the expulsion of the Germans after the Second World War, the population of Western Pomerania is now predominantly Polish-speaking.

The term Hinterpommern in its current meaning only emerged in modern times. In the Middle Ages, Pomerania was understood to mean the area of ​​the Duchy of Pommern-Wolgast between Oder and Gollenberg (near Köslin). Only the areas to the east of it were sometimes referred to as Hinterpommern, because they lay behind Pomerania . It was not until the 16th century that the term Hinterpommern became established for areas east of the Oder. This was then carried over to the areas taken over by Kurbrandenburg after 1648, without any sharp delimitation to the west being made.

Kolberg served alongside Koszalin the rule as center Bishopric of Cammin , in the background the St. Mary Cathedral at Kolberg 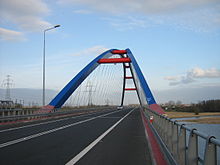 Bridge in Wollin over the Dievenow

Until 1945 the following belonged to Western Pomerania :