Gryfice (German Greifenberg in Pommern , formerly Greiffenberg ) is a city in the Polish West Pomeranian Voivodeship . It is the county seat of the Powiat Gryficki and the seat of an urban and rural municipality .

The city is located in Western Pomerania on the Rega River , about 48 kilometers southwest of Kołobrzeg ( Kolberg ) and 90 kilometers northeast of Szczecin . The Baltic coast is 28 kilometers away.

Greifenberg on the Lubin map from 1618.

In the middle of the 13th century, the griffin dukes Barnim I and Wartislaw III ruled Pomerania . They called Germans into the country to strengthen their dominion, Barnim primarily settled Germans in the eastern areas, while Wartislaw recruited Dutch and Danish settlers in the western area he ruled. Both dukes competed to found cities from 1234 onwards. Wartislaw's founding cities include Greifswald , Demmin and Kolberg . It was only two years before his death in 1262 that he issued a town charter under Luebian law for a settlement on the central reaches of the Rega River, to which he gave 100  Hufen land. The future governor Jakob von Trebetow received 20 Hufen from them and was commissioned to promote the founding of the city. All of this happened without a name being determined for the future city. It was only after Wartislaw's death that his heir Barnim I gave the city the name Griphenberch . 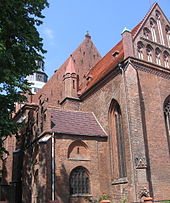 After the Rega was granted the right of free navigation, the city quickly grew to prosperity. Trade continued to flourish after joining the Hanseatic League in 1365 . Greifenberg surrounded itself with a city wall, broken through by three gates, of which the high and the stone gate are still preserved today. At the end of the 13th century, construction of the three-aisled brick church of St. Mary began. A document from 1386 mentions a Latin school in Greifenberg, which is one of the oldest in Pomerania. In the 15th century there were several disputes with Treptow in the north , which tried to demand customs from the Greifenberg ships sailing on Rega. The conflict escalated when Treptow tried in 1449 to close the river to all ships coming from the south.

In 1658 a devastating city fire broke out, which also destroyed the Marienkirche. It took ten years to rebuild. At that time, as a result of the Peace of Westphalia , Greifenberg was already under the rule of Brandenburg and had been incorporated administratively into the Greifenberger Kreis. During the 18th century, the city expanded through the establishment of the Camminer and Triglaffer suburbs, and the sources of income were shifted. If sea trade had been dominant up to now, it was gradually replaced by linen weaving, with which the city later made a name for itself.

With the Prussian administrative reform of 1818, Greifenberg became the district town of the Greifenberg district . The Greifenberger Neustadt was created as part of a city expansion. About 5,000 people lived in the city at that time. In 1852 the city received a grammar school, the Friedrich-Wilhelms-Gymnasium . In 1882 there was a connection to the Altdamm - ( Kolberg) railway line , and the Greifenberger Kleinbahn , a narrow-gauge railway, was opened on July 1, 1896. As a result, new industrial operations such as sugar, oven and pottery factories were established. Around 1900 Greifenberg had two Protestant churches (including St. Mary's Church from the 13th century), a synagogue , a grammar school, a non-commissioned school and was the seat of a local court .

When the Soviet troops conquered the city at the end of the Second World War , the city center fell victim to a major fire, and by the end of the fighting, about 40 percent of Greifenberg was destroyed. The city was placed under Polish administration after the end of the war, and Poles and Ukrainians began to immigrate, mainly from areas east of the Curzon Line . The remaining German citizens were driven from their homes and their evictions began , which was completed in 1946. The town of Greifenberg was renamed Gryfice .

From the medieval city wall from the 13th / 14th centuries In the 19th century, fragments with the Hohen Track , the stone gate and the powder tower have been preserved.

The narrow-gauge railway museum Gryfice , located near the station, shows exhibits on the history of small railways in Pomerania.

The urban and rural community Gryfice covers an area of ​​261.30 km² and thus occupies 25.7% of the area of ​​the Powiat Gryficki (district of Greifenberg ). With more than 23,500 inhabitants, it is the twelfth largest municipality in the West Pomeranian Voivodeship, which comprises 114 municipalities .

Gmina Gryfice includes 51 localities, which are subdivided into the city of Gryfice and 31 districts:

In the area of ​​Gmina Gryfice, three voivodship roads (DW) meet, which connect the urban and rural municipality in all directions with the neighboring regions:

The DW 109 establishes the most important connections to Landesstraße 6 ( Stettin - Danzig , former German Reichsstraße 2 , today also Europastraße 28 ) at Płoty ( Plathe ) on the one hand, and to the Baltic Sea coast on the other.