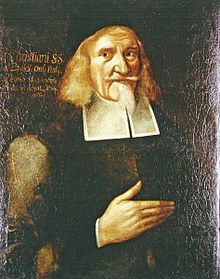 David Christiani in the Giessen Professorengalerie

David Christiani (born December 25, 1610 in Greifenberg in Pomerania , † February 13, 1688 in Gießen ) was a German Lutheran theologian and mathematician.

David Christiani, who was born in Greifenberg on December 25, 1610, attended high school in Kolberg and the Stettin pedagogy . He then studied at the University of Greifswald , moved to the Viadrina in Frankfurt an der Oder in 1631 and studied from the following year at the University of Rostock . Soon afterwards he went back to Greifswald to become a doctor of philosophy there. Later he was a hiking lecturer at the universities of Rostock, Marburg and Strasbourg . After becoming general superintendentof the Swedish army, but war riots raged, so that Christiani did not yet take office, first studied at the University of Basel in 1638 and then learned the Aramaic and Syrian languages at the University of Marburg . His language teacher was Menno Hanneken . From 1640 to 1642 Christiani made a trip that took him through Germany, but also through the Netherlands and England ; in the same year that he returned to Germany, he was employed as a professor of mathematics at the University of Marburg. Some professors had to flee to Gießen because of the war , which meant that the position of teacher for the Hebrew language had to be filled again; the decision fell on Christiani. Until 1650 he also adopted eloquence and poetry . He became a professor of mathematics at the University of Giessen after it was rebuilt. Shortly afterwards he became both an associate professor and a doctorate in theology. He was appointed superintendent in Sankt Goar in 1659, and then returned to Giessen in 1681 as a full professor of theology. During a disputation he formulated the statement that the Evangelical Lutheran Church was being suppressed in Brandenburg , which is why he was briefly suspended from his office. He died on February 13, 1688.