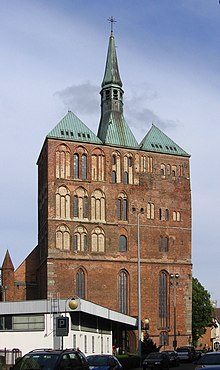 The Kolberg Cathedral (until 1945: St. Mary's Cathedral ) in Kołobrzeg (German: Kolberg), since 1986 Bazylika konkatedralna Wniebowzięcia Najświętszej Maryi Panny - Cathedral Basilica of the Assumption , is a five-aisled, Gothic brick hall church with a striking, originally made of two Towers walled together tower massif. Since it was rebuilt after being destroyed in the war, up to 9,000 churchgoers have been able to attend a service in the church. The church is co- cathedral of the diocese of Koszalin-Kołobrzeg in the Archdiocese of Stettin-Cammin .

The construction, which probably began in 1300, was completed in the first phase in 1321 and had the shape of a three-aisled hall church . Then the presbytery , two aisles and the tower wing were gradually built. With this splendidly designed Catholic parish church, the Hanseatic city of Kolberg showed its acquired wealth.

With the victory of the Reformation in Pomerania , the church became Protestant in 1531 . Galleries were created in the side aisles to create more space for church visitors. At the beginning of the 18th century the cathedral was in a very poor condition: it was severely damaged by multiple sieges of the city (1758 to 1761) and enemy fire, the explosion of the nearby powder tower and fires. It was not until the end of the 19th century that the cathedral was finally completely renovated.

The glass painters Alexander Linnemann and his son Otto Linnemann from Frankfurt created two windows with groups of figures at the beginning of the 20th century. Documents on this can be found in the Linnemann archive.

In March 1945 the church was badly damaged by Soviet troops when they took Kolberg . The vault of the main nave collapsed, the entire church burned down, the destruction and reconstruction are shown on a large panel in a side aisle.

In the 1950s and 1960s, the Museum of Polish Arms used the half-ruined church to display cannons, tanks and other military objects. The reconstruction of the church began after the ruins were given to the Catholic Church in 1974 . From this time on, the military objects were given their own exhibition grounds near the city canal.

In 1986 Pope John Paul II elevated the Kolberg Cathedral to the rank of a minor basilica . In the 21st century, the cathedral is the co- cathedral of the Koszalin-Kołobrzeg diocese .

There are several memorial plaques here to commemorate important historical events and important people in connection with the cathedral. There are honors for the Polish soldiers who died in the liberation struggle as well as for John Paul II , who worked as Cardinal Wojtyla at the cathedral. And numerous other events, such as the Solidarność movement, are represented.

Many of the cathedral's valuable works of art survived the Second World War, walled up in church niches or hidden in small country churches in the area. The seven-armed chandelier by Hans Apengeter from 1327 as a donation by the first dean Gottfried von Vida is significant . Also worth seeing are two chandeliers called Schlieffenkrone and Holkenkrone , the choir stalls (dated to the year 1340), a baptismal font cast in bronze from the year 1345, various paintings from the 15th to 18th centuries as well as a multitude of gravestones of important families and nobles the inner walls of the cathedral walls that were buried in the cathedral.

The main room has a new main altar , a pulpit , an organ on the gallery and murals with biblical scenes. In addition, two side altars are set up in side aisles and exhibition panels on the history can be seen, including the state after 1945. The altars bear the following titles: Ostatnia Wieczerza (The Last Supper) , Pokłon trzech króli (Adoration of the Magi) and Św. Anna Samotrzeć i św. Mikołaj (Anna Selbdritt and St. Nikolaus) .

A votive picture donated by Siewert Granzin in 1442 takes up the motif of helping the dead or the grateful dead: poor souls rush to the aid of a knight who seeks refuge in a cemetery. The inscription reads: “Biddet got uor siuert granszins sele and all kristen selen amen” (Pray to God for Siewert Granzin's soul and the souls of all Christians, Amen).

In the entrance area there are several memorial plaques, including those for the Polish Army, whose soldiers sacrificed their lives for the liberation of the city. Boards are also dedicated to the main sponsors who donated larger amounts for the extensive renovation between 2009 and 2001, for example eea grants ( funding from the EEA member states of Liechtenstein , Iceland and Norway totaling 3,324,909 euros ). The city and district of Kołobrzeg contributed further contributions (city 505,000 zloty, district 481,700 zloty) to the complete renovation.

Plastic on the Kolberg Cathedral

On the street, directly in front of the main entrance, a memorial was inaugurated in 2000, commemorating the then Pope John Paul II, King Otto III. (HRR) , Bolesław Chroby and the successor Pope Benedict XVI. shows. The pedestal bears the inscription Kołobrzeg 2000 . An arch with a dove arches over the middle figures. The monument was donated on the occasion of the 1000th anniversary of the founding of the Archdiocese of Gniezno (Gniezno Act ).