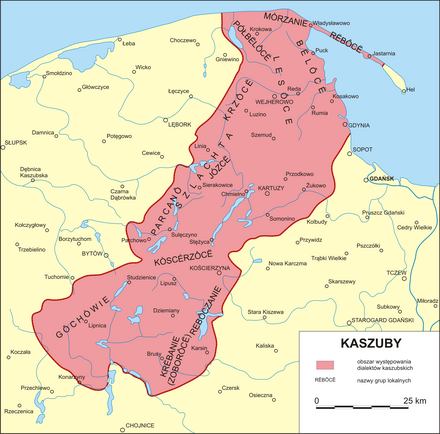 The Kashubians (also Kassuben, Polish Kaszubi , Kashubian Kaszëbi ) are a West Slavic people living in Poland in the Pomeranian Voivodeship ( Województwo pomorskie ) in the region of Kashubia , also called Kashubia . In addition, many of those belonging to this ethnic group have emigrated to the USA , Canada and Germany or have settled in further Poland.

The origin of the name is controversial. A common explanation is that it is derived from the kassub , a coat worn by the Kashubians. But this is not certain. One theory says that the name Cassubia "was identical to Slavia " and originally referred to "West Pomerania in contrast to East Pomerania". The name was initially only in use in the east for the more western Slavic countries, but was then adopted by the "western Pomorans themselves". As a result of the Germanization of the Slavic Pomerania and the associated extinction of the Pomoran , this name then "migrated" east to the last remnants of the Eastern Pomorans. The Kashubian language , a West Slavic language from the Lechian branch, which is understood by around 300,000 Kashubians today and is actively spoken as a colloquial language by approximately 108,000 people , contains both German (approx. 5%) and Old Prussian loanwords.

Among the Kashubians the defunct National Branch belonged Slovincians , the west moved today Kashubian. The Kashubian costume that is worn on the major holidays is famous .

In the 13th century " Caszubitae ", ie Kashubians, are mentioned in the Chronica Poloniae Maioris . Cassubia (Kashubia) was only called the country around Belgard an der Persante , an area in the later province of Pomerania . The name passed only to the country ( pomerelia , Pommerellen ) and the people of today's Kashubian people in the 16th century .

With the German settlement in the east , which began in Pomerania at the end of the 12th century when the Kolbatz monastery was founded, a process began, slowly running from west to east, of the Kashubians, who became a minority, in the immigrant German population. which in turn took over place and field names as well as customs and other traditions of the Kashubians. In the Pomeranian duchies, which had belonged to the German Empire since the 13th century , this development, in which the new German tribe of Pomerania emerged, was completed around the 16th century. In the eastern part of the Kashubian settlement area, however, it came to a standstill at the same time. This part, less affected by the eastern colonization, had belonged to Poland since 1466, where better conditions existed for the further development of the autarkic Kashubian culture . After the territory came to Prussia during the First Partition of Poland in 1772, no comparable process of Germanization and mixing took place there. The still Catholic Kashubians in the former Prussian royal share not mingled with the mainly Protestant Lower German-speaking population of their region - in contrast to the evangelical slowinzischsprachigen Lebakaschuben in Pomerania . While in the administrative district of Köslin of the Pomerania province in 1827 4,080 Kashubians were "calculated", in West Prussia around 1860 89,180 were counted. In 1900, 310 people in Pomerania, but 1132 in 1910, gave Kashubian as their mother tongue. In the province of West Prussia, however, their number had roughly doubled to around 107,000 between 1890 and 1910. Under both German and Polish dominance, the Kashubians were considered a rural minority. For Kashubians, “access to the world” with its opportunities for advancement was only possible through mastering the respective languages.

The Kashubians who live in the state of Poland today feel a historical and ethnic bond with Poland , but maintain their own language and tradition. Since the 19th century there have been Kashubians, on the one hand, who emphasize the particular closeness of the Kashubians to Poland and to Polishism and rather describe themselves as an ethnic group, and on the other hand (much smaller) currents that, in contrast, focus on the independent Kashubian nationality move, which is sometimes seen by some Poles as a separatist tendency. As an example of these two currents, two important Kashubian personalities of the 19th century can be named, both of whom made outstanding contributions to the Kashubian language and its development: While the Kashubian writer Hieronim Derdowski (1852–1902) wrote: “Nie ma Kaszëb bez Polonii, a bez Kaszëb Polśczi ”(“ There is no Kashubia without Polonia , but without Kashubia Poland ”), Florian Ceynowa (1817–1881) turned against both the Germanization and the Polonization of the Kashubians and criticized the Polish clergy and the Polish nobility. Today, Kashubian is taught in schools in various places in Kashubia, an independent literature is promoted and protected by the Polish state.

The Kashubian folk songs and dances are performed in a quiet 2/4 and 3/4 time. Earlier modal melody forms were abandoned in favor of major and minor scales. Two musical instruments characteristic of the Kashubians are the long wooden trumpet bazuna and the grating drum burczybas .

Distribution of the Kashubians in the Pomeranian Voivodeship

The most famous Kashubs of modern times include:

Some have Kashubian ancestors: