Before the storm (novel) 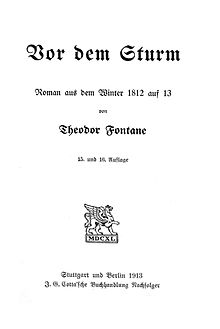 Before the storm. Novel from the winter of 1812 on 13 is a historical novel by Theodor Fontane .

During his wanderings through the Mark Brandenburg , Fontane came up with the idea for his subject in 1862, at that time still under the working title Lewin von Vitzewitz . He interrupted work on it in 1863, only to make a new attempt in 1876. The novel appeared on January 5, 1878 as a 36-part preprint in the Leipzig weekly Daheim. A German family sheet with illustrations .

The four-volume book edition ( Hohen-Vietz , Schloß Guse , Alt-Berlin , Wieder in Hohen-Vietz ) had been completed by October 1878, and sales began in November 1878.

Before the Storm , Fontane's first novel was designed as a portrait of the Prussian society of all classes (citizens, peasants, nobility) at the time of the wars of liberation . The focus of the plot is the noble student Lewin von Vitzewitz, whose private fate reflects historical events. The novel is set in the fictional castles of Hohen-Vietz and Guse as well as Frankfurt an der Oder and Berlin .

Winter 1812/13 in the Oderbruch : In the village and castle Hohen-Vietz the population awaits the signal of the king for a national uprising against the Napoleonic occupiers. The head of the family, Berndt von Vitzewitz - drawn after the image of the historical Friedrich August Ludwig von der Marwitz  - impatiently founds a Landsturm troop in advance and is determined to strike even without the consent of the king and his ministers, because he values ​​loyalty to his country more than they do Loyalty to his king. He wins over the nobles on the neighboring estates for his project; they too begin to recruit land storm companies. Attacks are planned on the French regiments returning from the failed Russian campaign. Berndt's son Lewin is initially critical of the project because Prussia is still Napoleon's ally. The family spends the days between Christmas and New Year's Eve with friends, the prospect of an eventful (war) year 1813 determines the conversation. Hope and worry are balanced.

While the patriotic enthusiasm spreads across the population, Lewin returns to Hohen-Vietz after his hopes for a connection with his Polish cousin Kathinka von Ladalinski have been dashed. In the meantime the Landsturm under the command of Major General von Bamme has set up its headquarters here. Lewin can be recruited by the troops. He is captured during an action by this land storm, which fails due to a lack of support from the regular Russian troops. When he is freed, his friend and cousin Tubal von Ladalinski, Kathinka's brother, is fatally injured and dies the following night. Lewin's sister Renate von Vitzewitz, who loves Tubal and, at the request of her aunt, Countess Amelie, should marry him, will remain unmarried.

Lewin marries Marie Kniehase, an orphaned actor's child who was brought up together with the Vitzewitz children. According to an old prophecy, the Vitzewitz family will be freed from an old curse . The marriage puts the barriers of class up for grabs. Marie, so Berndt von Vitzewitz to his son, “will of course spoil our family tree, but not the profiles, not the profiles and not the disposition. And both of these are the best the nobility has. ”(IV. Book, Chapter 27)

About the biographical requirements

The subject of the novel, the beginning of the Wars of Liberation , gives rise to the most detailed accounts of military operations found in Fontane's novels. Fontane ties in with his war books. The exact description of the Mark is based on his knowledge acquired on the hikes through the Mark Brandenburg .

Fontane's experiences in the " Tunnel over the Spree " are reflected in his portrayal of the Kastalia poet society , with the historically interested ballad poet Detleff Hansen-Grell being drawn in the image of the young Fontane and his ballads Hakon von Borkenbart and General Seydlitz .

The patriotic family of the Prussian Vitzewitze is juxtaposed with the uprooted family of the Polish Ladalinskis. The military leader of the Landsturm action, Major General von Bamme, shows some similarities with the messenger woman von Hohen-Vietz, Hoppenmarieken , who belongs to the semi-criminal milieu of the forestry workers . The Vice-Rector Othegraven refers to the Prussian General Karl Thomas von Othegraven . The person constellation shows some similarities with that of Stechlin (1897–98).

During the attack on Frankfurt, the last words of the stabbed French sentry to the opponent's address were “Petit crevé!”. However, the term crevé was not used in the present application until around 1865.

The novel was made into a film in 1984 under the title Before the Storm .