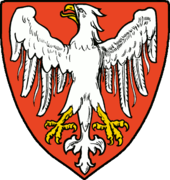 Coat of arms of the Ruppin rule

The rule of Ruppin (also Grafschaft Ruppin ) was from about 1214 to 1524 a territory of the Holy Roman Empire in the possession of the Counts of Lindow-Ruppin . In its early days it was presumably imperial . Later the rule was extended to include the fiefs of the Margraves of Brandenburg and in the further course probably came completely under the sovereignty of the Margraves . After the Lindow-Ruppin family died out, power fell to the Mark Brandenburg and henceforth formed the Ruppin district . As Ruppiner Land, the former territory of the rulership forms a historical landscape in Brandenburg .

The Ruppin reign around 1400

The area of ​​the later rule of Ruppin was only sparsely populated since the 1st century. Slavic tribes immigrated from the east probably from the 6th century . Since 948 at the latest, the Elbe Slavic tribe of the Zamzizi inhabited the area. Its political center was probably the Slavic castle Ruppin on an island in the Ruppiner See . In addition, the Altfriesack castle wall on the north bank of the Bützsee probably formed another cult focal point. Treskow Castle Wall was on the west bank of the Ruppiner See . In the second half of the 12th century, the area came under German sovereignty after the Wendenkreuzzug in 1147 and the German eastern settlement began in the area.

Around 1214, the area between the Temnitz and Rhin rivers came into the possession of the noble Count Gebhard von Arnstein (* 1180/1209; † around 1256), a great-grandson of Albrecht the Bear, as presumably imperial direct rule Ruppin . He is the first historically documented Herr zu Ruppin and the progenitor of the Counts of Lindow-Ruppin , who formed a branch line of the Counts of Arnstein and remained in the possession of the rulership until 1524. The name Lindow-Ruppin refers to the rule Ruppin and the rule Lindau (also rule Lindow ) in Anhalt , which was also owned by the noble family.

Shortly after 1220 Gebhard had extended the area of ​​his rule to the east to the borders of Gransee and Löwenberg . He built the Ruppin Castle (also Planenburg ) to Alt Ruppin in the immediate vicinity of the former Slavic castle Ruppin as the political center of the rule. The castle Wildberg was probably also in his possession. Five kilometers southwest of Ruppin Castle, Gebhart founded the Neuruppin settlement as the economic center of the Ruppin rule; it was first mentioned in writing in 1238. Between 1230 and 1240 Gebhart founded the Cistercian nunnery in Lindow . In 1240 he took up his permanent residence in Ruppin Castle. In 1246 Gebhard's brother Wichmann von Arnstein (* around 1185; † 1270) founded the Dominican monastery Neuruppin and became its first prior .

The Neuruppin settlement received town charter in 1256 under Gebhard's son Günther I von Lindow (* around 1230; † around 1284). In the course of the 13th century, the area of ​​the Ruppin dominion was extended northwards to the line Goldbeck - Rheinsberg - Menz . Goldbeck Castle was built around 1300 . In 1349, the states of Wusterhausen and Gransee were added as fiefdoms of the Margrave of Brandenburg , after they had been in pledge possession of the Count of Lindow-Ruppin since 1317 . In 1407 Neustadt became part of the Ruppin rule.

See also : List of the places of the Ruppin rule

Despite the sovereignty of the Margraves of Brandenburg presumably already in existence at that time, the rule of Ruppin was managed as the territory of the Upper Saxon Empire, which was created in 1512 . According to the Reichsmatrikel of 1521 the rule Ruppin had three soldiers on horseback, twelve soldiers on foot and 42  guilders for the Imperial Army to provide.

In 1524, the noble Lindow-Ruppin family died out with the death of Count Wichmann. The rule of Ruppin was then completely withdrawn by Elector Joachim I of Brandenburg and united with the Mark Brandenburg. It was retained as a corporate and tax unit and from then on formed the district of Ruppin der Mittelmark . Relatives of the deceased Count Wichmann sued the Reich Chamber of Commerce in 1541 against the elector's confiscation of rule. The lawsuit was dismissed in 1562.