The school, founded in the 16th century, was originally located in the rooms of the former Gray Monastery in Berlin-Mitte , but had to move after the Second World War and was then located on Niederwallstraße in East Berlin. Also the library, all collections of the Gymnasium zum Grauen Kloster and the foundation documents of the Streitschen Foundation of the former pupil (1757–1763) of the Gymnasium, Sigismund Streit , later a merchant in Venice, who donated his collections (paintings and books) to his old school and who thus regulated their future growth and maintenance through financial donations were located in East Berlin, first in the Ermelerhaus , then in the Berlin city library. But since this school with the traditions of the Gray Monastery repeatedly attracted attention in a way that was critical for the GDR, the GDR government decided in 1958 to withdraw its name from the school. It was not until 1963 that the Protestant grammar school in Berlin-Schmargendorf was given the name Gymnasium zum Grauen Kloster.

There is a school in church sponsorship .

Location of the former Berlin High School for the Gray Monastery and the parish churches of St. Marien and St. Nikolai in Berlin

Illustration of the 1819 by Friedrich Wilhelm III. warehouse donated to the grammar school (picture postcard from 1901)

On July 13, 1574, the Berlin high school "Zum Grauen Kloster" was built in today's Klosterstrasse . In 1271 the mendicant order of the Franciscans founded the Gray Monastery near the city ​​wall at what was later to become the grammar school . The name of the monastery goes back to the gray robe of the Franciscans. In 1539 the monastery was secularized and dissolved in the course of the Reformation , whereby the religious received lifelong right of residence. After the last Franciscan died in the monastery on January 4, 1571, the Brandenburg Elector Johann Georg , who succeeded the throne in January 1571 , wanted to use the monastery as a grammar school and consecrated it on July 13, 1574.

When the parish schools St. Marien and St. Nikolai moved in in 1571 , the Berlinisches Gymnasium was founded as the highest educational institution in Berlin and the first state school in the Mark Brandenburg region. It developed into the first class bourgeois educational institution in Berlin. In May 1767 the Berlin Gymnasium was merged with the Köllnisches Gymnasium and now continued together as the Berlin Gymnasium to the Gray Monastery until 1824.

Around 1770, the then rector Anton Friedrich Büsching had the new school building built to the left of the Franciscan monastery church . In 1819, Friedrich Wilhelm III. the “warehouse” of the grammar school, which housed the auditorium, library and science classrooms.

1900–1901 a historicizing extension was built according to the designs of the architects Matzdorff and Högg . The building contained apartments for the director and two professors in the front and transepts, and in the rear there were bedrooms for 12 students. The school building was supposed to fit harmoniously into the old group of the Gray Monastery, which is why Brandenburg brick of a Gothic character with some later-style motifs such as bay windows, front door and ironwork was used. The masks were cut directly into clay by the sculptor Hans Latt in the brickworks. The sculptor also designed the bay window. The total cost was 283,000 marks.

The high school building and the adjacent church were destroyed by bombs in 1945. Therefore, the high school first moved into the former rector of the House of Friedrichswerder Oberrealschule in Weinmeisterstraße 15 (Berlin-Mitte), then - in 1949 - in the building of the now by Berlin-Wedding relocated French school in Niederwallstraße 6-7 .

In 1949 the Evangelical Church founded the Protestant grammar school, which is also old-language, in the parish hall of the Church of Faith in Berlin-Tempelhof. This school then moved to Berlin-Schmargendorf in 1954 at Salzbrunner Strasse 41-47 in a former burnt-out administration building near Hohenzollerndamm, which was rebuilt with funds from the Marshall Plan .

In 1958, the old name Graues Kloster was officially revoked from the school in Niederwallstrasse as part of the SED school policy ; The 2nd EOS Berlin-Mitte existed in the building until 1984 ; it was the only state school in East Berlin to set up old-language classes.

On May 31, 1989, a memorial plaque was unveiled on the listed school building, which was donated to the Gray Monastery by the Berlinisches Gymnasium Foundation . The plaque shows the old monastery church and the monastery building in which the high school resided for a long time in bas-relief.

The ruins of the historic building in Berlin-Mitte were planned for reconstruction in the 1950s, but were leveled in the course of road construction in 1968. The church ruins , however, still exist today as a monument and are used for exhibitions.

Associations related to the Gray Monastery

Graduates of the grammar school studying at the Berlin universities founded a striking student union in 1877 , the association of former monasteries , which soon developed into the fraternity of monasteries . In order to emphasize its elitist orientation even more, the fraternity quickly transformed into a corps , which from now on called itself Corps Baltia Berlin and was accepted into the Rudolstadt Seniors' Convent . The Corps Baltia Berlin merged with the Corps Silingia Breslau in 1954 and moved its headquarters to Cologne.

The school library of the high school with a valuable old stock comprised 45,000 volumes before the Second World War. After war losses, around 14,000 volumes from the 15th to 20th centuries have survived and are currently on loan at the Central and State Library in Berlin . In addition to the works of the college, which were collected separately as Litteratura Gymnasii , the library also contains donations from the pupil Sigismund Streit (1687–1775) and others, such as Friedrich Nicolai , as well as the school's archive. The books were re-cataloged after 1989 by the Streitsche Foundation.

The Association of Friends of the Evangelical Gymnasium zum Grauen Kloster - Berlinisches Gymnasium in Berlin-Mitte e. V. would like to build a Protestant school with an ancient language on the former site of the school, over which the busy Grunerstraße currently leads. The urban planning of the Senate Department for Urban Development provides for the demolition of Grunerstraße and the use of the area formerly belonging to the monastery for a school.

The Evangelical Gymnasium for the Gray Monastery is attended from the 5th grade; This makes it one of the few so-called basic grammar schools in the state of Berlin in which the transition to an upper school normally takes place after six years of elementary school. The Gray Monastery also converted the curriculum to a total school time of 12 years. The last class with 13 school years left school in 2012. The grades are designated in ascending order with sixth, fifth, fourth, lower, upper and lower and, during the course system, with the 1st, 2nd, 3rd and 4th semester.

The grammar school has a Protestant , ancient language orientation; Latin and English are compulsory subjects from the 5th grade onwards, and ancient Greek from the 8th grade onwards. A further foreign language (French) can be chosen from year 9 onwards. From the 10th grade onwards, Hebrew can also be chosen. An ancient language (Latin or ancient Greek) is also required as a compulsory examination subject in the Abitur. It is therefore possible to leave the school with the three degrees Hebraicum , Latinum and Graecum , whereby every student who attended the school from the beginning receives the Latinum with the middle school leaving certificate and the Graecum after completing the 11th grade, if he in the last semester attended the language did not fail. The written and oral examinations of the Hebraicum are held by the Senate.

In contrast to state secondary schools, Protestant religious education is not a voluntary but a compulsory subject from the beginning of school to the Abitur; it can also be chosen as an examination subject within the scope of the statutory combination options. All students also attend the weekly school devotion on Wednesday morning.

Since the end of the 1960s, a social internship in the tenth school year has been part of the school career at the Gray Monastery ; the pupils look after chronically ill, old or disabled people; it initially took place in the Evangelical Johannesstift in Spandau, and since the mid-eighties the students have been going to the Von Bodelschwingh Foundation Bethel or Eckardtsheim in Bielefeld or the Diakonische Stiftung Wittekindshof near Bad Oeynhausen. The two-week social internship is intended to expand the social skills of the students, to enrich the emotional world of young people with the knowledge that disabled and non-disabled people are children of God and have the same needs and perspectives, but that people with a handicap also require special protection and an active love and affection .

The degrees obtained at the Gray Monastery are equivalent to the degrees from public schools.

The number of students has almost doubled since the 1980s; it is now around 800 on average. However, the number of children who are supposed to be registered by their parents still far exceeds the capacity of the school. Therefore, only a fraction of those willing to register are accepted every year. The allocation of places is based on the school's own application process, which includes an interview with both the child and the parents.

Due to the commitment of some teachers, working groups are offered in addition to everyday school life, which can usually be attended free of charge. For many years there has been a dance group, an orchestra group, a student and parents choir and a theater group. For some time there has also been a physics working group and an economic working group. Due to regular performances of the individual working groups, there is a lively extracurricular life in which parents, teachers, students and alumni are integrated.

The Debattier-AG is dedicated to debate theory and practice as well as the competition Jugend Debattiert . The work in this working group is closely related to the culture of debate in antiquity and offers students the opportunity to use the millennia-old rhetorical theory in their immediate environment in a young way. The school provided five state winners (Berlin), including two national winners.

The rowing team of the Gray Monastery, located on the south bank of the Kleiner Wannsee , existed from 1905 to 1943, had to be abandoned due to the war and was then re-established in 1955.

The gray monastery around 1910 (old postcard). To the left of the Franciscan monastery church from 1770. On the left edge of the picture the so-called “warehouse”. 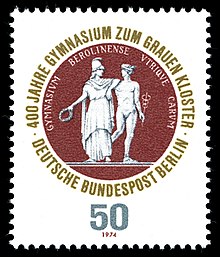 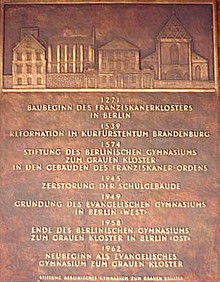 Memorial plaque for the Berlinisches Gymnasium zum Grauen Kloster. View of the buildings from Klosterstrasse.