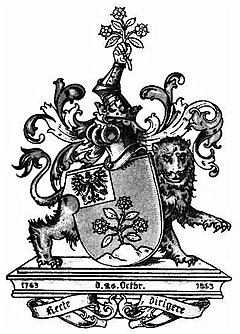 After attending school at the Gray Monastery high school , he joined his father's type foundry in 1818 . He then did an apprenticeship as a typesetter from 1821 and then spent a few years traveling in Saxony , Hesse , Switzerland , France , England and Italy . In 1827 he returned to Berlin and, together with his brother Karl Gustav, succeeded his father, who had died in 1819. The company had initially been run as a consortium since the father's death until the sons came of age. Since his brother died in 1829, Rudolf Ludwig Decker was the sole owner of the company, now known as the Königliche Geheime Oberhofbuchdruckerei (R. v. Decker) , from May 27, 1860 .

Under his aegis, in addition to the state print jobs (for example the Allgemeine Preußische Zeitung , the Königlich Preußische Staats-Anzeiger , the Criminal Code for the North German Confederation ), the topographical-statistical manual of the Prussian state , the Prussian appointment calendar and a specialization in political and legal science Literature also produces typographically artful book editions. The most important of these productions include the magnificent edition of Karl Lachmann 's volume Twenty Old Songs from the Nibelungs , a 30-volume edition of the works of Frederick the Great (Oeuvres de Frédéric le Grand) in 200 copies from 1846 to 1857 , one from On the occasion of the London World's Fair in 1851 , the magnificent edition of Martin Luther's New Testament from 1545 in an edition of only 80 copies, the publication of works by Friedrich von Bodenstedt and the Dante edition by Karl Witte ( Divina Commedia ) in only two copies in 1862. Decker is also one of the main publishers of Theodor Fontane's works . He also published several publications of the Association for the History of Berlin (e.g. the Berlin Chronicle ), and military literature . In addition, Decker printed the newspaper Berliner Fremd- und Werbungblatt with a circulation of 40,000 copies and participated in several newspaper publishers.

In 1832, Rudolf Ludwig Decker married a star singer of the Berlin court opera , Pauline von Schätzel from the aristocratic house of Schätzel . The couple counted Giacomo Meyerbeer among their circle of friends.

For the 100th anniversary of the company, Rudolf Ludwig Decker was awarded the hereditary title of nobility in 1863 . Decker was a member of the Outlaw Society in Berlin .

After his death the printing house was bought by the German Reich and on the initiative of the postmaster general Heinrich von Stephan on April 1, 1879 by merging with the Royal Prussian State Printing House founded in 1852 to form the Reich printing house , from which today's Bundesdruckerei emerged after the Second World War .

The publishing division (R. v. Deckers Verlag) , owned by Rudolf Ludwig Decker from 1828 to 1877, was sold to private customers. The publisher's archive was destroyed in the Second World War. The publishing house R. v. Decker is today an imprint of the Hüthig Jehle Rehm publishing group in the Süddeutscher Verlag media group .