The Bundesdruckerei GmbH (short form: BDr ) produces documents and devices for secure identification and provides related services. It is based in the Berlin district of Kreuzberg . The security printer offers complete passport and identification systems and documents, high-security cards, document, security software along with trust center to -Services. Bundesdruckerei also produces banknotes , postage stamps , visas , vehicle documents , tobacco tax stamps and electronic publications. Its origins lie in the former Reichsdruckerei . After privatization in 1994 and various changes of ownership through repurchase by the federal government, the company has been in state ownership again since 2009.

Headquarters of the Federal Printing Office in Berlin 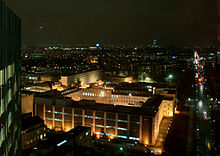 Today's Bundesdruckerei was founded on July 6, 1879 in Kreuzberg's Oranienstrasse  91 as a Reichsdruckerei . At the time, it emerged from two printing works that were merged on the initiative of the then General Post Director Heinrich von Stephan : the Royal Secret Upper Court Book Printing House of the publisher Rudolf Ludwig Decker , which was taken over by Georg Jacob Decker in 1763, and the Royal Prussian State Printing House founded in 1851 .

From 1880 the Reichsdruckerei produced not only all state printed products but also the first Berlin telephone directory , reproductions of works of art , postage stamps and patent documents .

In 1905, an in-house ink grinder was established in order to ensure consistent quality of the printing inks.

With the beginning of the First World War , large amounts of the coins in circulation were confiscated and transferred to the Reich War Treasury. In order to save precious metals for money production, additional loan slips for one and two marks as well as large amounts of other Reichsbanknotes were issued. This made it necessary to switch from costly copper printing to the more powerful letterpress printing process. Against the background of rising inflation , over 8,600 people were employed in banknote production from 1922 onwards. The 57 different Reichsbanknotes were produced as "bulk goods" on huge paper rolls using rotary printing .

The Second World War caused great damage on the premises of the Reichsdruckerei. Nevertheless, production could be maintained until June 21, 1944, when an Allied air raid set all the paper supplies on fire. In a heavy bombing raid on February 3, 1945, around 1,500 US aircraft attacked Berlin, destroying around half of all administrative and production facilities.

In 1955 , banknotes were printed again for the first time - with the 5 DM value . Until then, the currency of the Federal Republic was produced in Great Britain , the USA and France . Two years later the head office was finally relocated to Berlin. From 1959 the 50 DM and later also the 10 DM notes were printed in Berlin. All other banknote denominations were printed by the Giesecke & Devrient Typographical Institute in Munich .

With the introduction of the federal identity card in 1960, Bundesdruckerei also produced identity documents again. At the same time, international business - primarily with Venezuela  - was set up in the areas of postage stamps, alcohol tax stamps, postage stamps and passports.

View of the Bundesdruckerei from Kommandantenstrasse

In 1979, Bundesdruckerei celebrated its 100th anniversary under the then President Klaus Spreen. The introduction of international ICAO standards for forgery-proof identity documents began. On April 1, 1987, the first identity cards in ID-2 format and on January 1, 1988 the then new passport with an integrated passport card were issued, which have since been printed centrally in Berlin.

The fourth and final series of the D-Mark was issued in 1989. The design of the entire series with numerous new security features was the responsibility of Reinhold Gerstetter, who was chief graphic designer at the Bundesdruckerei at the time .

In 1997 the order for the production of the European model of the German driving license was awarded to the Bundesdruckerei. The first driver's license cards were issued at the beginning of 1999.

In 1999 Bundesdruckerei was also commissioned to print part of the German euro banknote series. A new banknote production line was built for this purpose.

As part of the European harmonization of vehicle documents, the issue of forgery-proof German vehicle letters and certificates ( registration certificates ) began on October 1, 2005 . On November 1, 2005, the electronic passport (ePassport) was introduced in Germany. As the general contractor, Bundesdruckerei continues to produce the passport and equipped around 5,500 German registration authorities with the necessary technical and logistical infrastructure .

Two years later, on November 1, 2007, the issue of the second generation of ePassports for Germany began. For the first time in the world, the Extended Access Control (EAC) is used to protect the two fingerprints stored in it . At CeBIT 2008, the “Innosec Fusion” card was presented, which is particularly suitable for the electronic identity card planned by various European countries. This means that transaction and identity security in electronic communication processes can be improved in the long term.

Bundesdruckerei has been supplying electronic ID cards for federal authorities , the federal police and the armed forces since April 2008 .

On November 1, 2010, production of the credit card-sized German ID card , which contains electronic components, began. Since September 1, 2011, Bundesdruckerei has been producing the electronic residence permit for foreigners living in Germany ( non-EU citizens ).

Bundesdruckerei has been producing the “ Passport 3.0 ” since March 1, 2017 . The extensive changes to the design include moving away from the previous hardcover to a flexible, bendable cover, as well as eliminating the laminated data page in favor of an all-plastic card made of polycarbonate . The new passport also contains numerous new security features and graphic innovations.

In 1994 the Federal Cabinet decided to convert the Federal Printing Office into a company under private law. Initially, the federal government became the sole shareholder. On July 1, 1994, Bundesdruckerei became a limited liability company (GmbH). Until the privatization, the company was a higher federal authority and was subordinate to the Federal Ministry of Post and Telecommunications .

In 1998 D-TRUST GmbH was founded, a subsidiary of Bundesdruckerei, which offers digital signatures and a certification service as a trust center .

In 1999, Bundesdruckerei GmbH founded BIS Bundesdruckerei International Services GmbH , which takes care of major international projects. With Maurer Electronics GmbH , a provider of electronic and precision mechanical devices for the forgery-proof personalization of documents was acquired.

In August 2002 the insolvency of Authentos GmbH , which resulted from the withdrawal of equity from the Bundesdruckerei and the overindebtedness of other companies in the group, was averted after the shareholders, lenders and the federal government had agreed on a waiver of payment.

In September 2002, the Authentos Group was transferred to two interim buyers for the symbolic purchase price of one euro : The Berlin-based JFVVG thirty-ninth asset management company (94% share) and Dinos Vermögensverwaltung in Heidelberg (6% share).

The repurchase of Bundesdruckerei GmbH by the Federal Republic of Germany was completed in March 2009 and was formally completed on October 8, 2009. According to press reports, no cash was used for the buyback, but loans totaling 310 million euros were converted into equity.

In May 2014 Bundesdruckerei GmbH and Giesecke & Devrient (G&D) sign an agreement to set up a joint venture . G&D will take over 60% of the shares in the new joint venture named Veridos GmbH and Bundesdruckerei 40%. G&D will have sole control under merger control law. G&D and Bundesdruckerei contribute their respective foreign activities. The joint venture will take part in tenders from foreign government clients for ID documents, driver's licenses and health cards. The new company is to be based in Berlin. It is planned that Veridos will have an operating facility in Munich , a production facility in Greece and subsidiaries in Canada , Mexico and Brazil . Veridos will act independently of the parent companies on the international market.

In July 2015, Bundesdruckerei GmbH announced that it had won the international tender by the International Civil Aviation Organization to set up and operate the ICAO Public Key Directory, which is necessary to check electronic travel documents from third countries for authenticity and authenticity. This project is being realized together with the trust center subsidiary D-Trust , the Veridos joint venture founded in 2014 and the EGSP (Emirates German Security Printing) joint venture .

At the beginning of August 2015, Bundesdruckerei GmbH announced in a press release that it would secure a majority stake of 52% in the German firewall and VPN specialist genua GmbH .

The following is an overview of Bundesdruckerei GmbH's investments:

As the parent company, Bundesdruckerei GmbH takes over essential parts of the operational business of its subsidiaries.

Bundesdruckerei GmbH's core business is ID systems and ID documents. This includes the production of identity cards , passports , children's passports , electronic residence permits (eAT), EU driving licenses , vehicle letters and permits, and the provision of trust center services. In the domestic business this had a turnover of 301 million euros.

As the general contractor of the Federal Ministry of the Interior , Bundesdruckerei GmbH is responsible for the entire German ePassport system (electronic passports) and its infrastructure.

The ePassport, ID card and residence permit systems run on an operator model from Bundesdruckerei GmbH. The sales of the operator model follow the development of the respective sales volumes. This model includes the secure acquisition and transmission of data, secure verification and secure modification of the data. For this purpose, the passport and identity card authorities as well as immigration authorities in Germany were equipped with reading devices and change terminals as well as the corresponding software for data acquisition, data encryption, data transfer, data visualization and data change. Employee training by the authorities and technical on-site support with our own service vehicle fleet are part of the service package. Bundesdruckerei GmbH has a call center available for all inquiries from the authorities.

The international business had a turnover of 32.9 million euros. Customers with high sales shares in 2013 were Venezuela , Libya and the United Arab Emirates with passport systems.