from Wikipedia, the free encyclopedia
This is the spotted version , flagged on May 21, 2020 . There is 1 pending change that has yet to be viewed.

A telephone book contains an alphabetical listing of all subscribers in a telephone network , usually divided into regions, with their associated and unique telephone numbers . It does not contain secret numbers or telephone numbers for which the customer has objected to an entry or does not want publication in the print media (publication on CD-ROM , on the Internet or via the information is still possible). Due to the many addresses it contains, phone books can also be used as an address book .

To protect against unlawful use and resale of address data, for example for marketing purposes, telephone books contain so-called “control entries”, ie addresses of fictitious people (similar to the fictitious articles in encyclopedias ). This allows unlawful users of the data to be tracked down. For example, if a fictitious name also appears in another provider's phone book, it is obvious that the other provider copied the phone records.

The phone book publishers often publish the print directories once a year. In addition, the telephone numbers are now also available on the Internet or on CD-ROM. In addition to the regularly updated contact data, numerous additional functions such as Internet addresses, map sections of the place of residence or route planners are often offered.

In the meantime, the market has changed to the extent that several competitors share the former monopoly of the telephone directory publisher. But even in times of new communication technologies from mobile to IP telephony , the telephone book publishers continue to strive to keep the data stock complete and up-to-date through additional independent research. Traditional landline connections can be assigned to the geographical end of the telephone line according to the narrow definition of the address (fixed address). Mobile telephone numbers are linked to the variable location of the end device and can therefore only be incorporated into traditional telephone books that are based on a regional principle with difficulty. Here they are usually specified in addition to landline connections for an owner. The same applies to IP telephony numbers or even Internet services such as Skype , whose user names cannot be found in telephone books. In addition, such data can neither be recorded easily, since the users do not provide their address, nor do most users wish to find their user name with a clear name in a printed directory with a residential address.

Basically, the size of today's telephone books already shows that by far not all residents of a city are listed in them. On the one hand, because many subscribers no longer want an entry for data protection reasons (e.g. because of unwanted advertising calls or frauds committed over the telephone, such as the grandchildren's trick ), on the other hand, due to the spread of mobile communications, there are now many households in which no landline connection is available is.

Cover of the first Berlin telephone directory from July 14, 1881

Telephone book for South Tyrol from 1925

Title page of the official telephone book for the district of the Reichspostdirektion Berlin 1941, 1534 pages 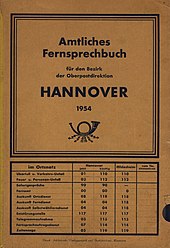 The first ever telephone directory appeared in New Haven , Connecticut on February 21, 1878 . It was a list of 50 entries.

In 1877 Postmaster General Heinrich von Stephan discovered the telephone invented by Philipp Reis in a magazine . On October 26, 1877, successful transmission attempts were carried out in Berlin under his and General Telegraph Director Budde's direction, which resulted in the establishment of the first telephone network in Germany. On July 14, 1881, the first German telephone book with the title " Directory of those involved in the telephone system " was published in Berlin . Von Stephan insisted on using the German term for telephone. This directory contained 185 entries, sorted alphabetically and divided into four columns with number, name or company name, the “name of the stand or branch of business” and the address of “apartment or business premises”. In the vernacular of Berlin , Germany's first telephone directory was also called the “Book of Fools” because people on the street felt sorry for the first German participants who fell for this “hoax from America ”.

In 1889 Stephan was able to announce the ten thousandth Anschluss. The telephone books in Germany were canceled in 1917 due to a lack of paper due to the First World War and from 1942 during the Second World War . The address books previously available for many cities , which listed all the inhabitants of a city, sometimes contained telephone numbers.

Although it was initially intended purely as a directory, the first advertisement appeared in Cologne's "Telephone Subscriber Directory" as early as 1897 and established the history of the telephone directory as an information and advertising medium . When it was delivered to all telephone subscribers as an official telephone book, it was widely used in German households in the 1970s. It has been available as a "telephone directory" since privatization in the 1980s.

For a long time, entry in the phone book was mandatory for every subscriber, only in special circumstances (e.g. if the private telephone number of a prominent person should not be known) could it be dispensed with. Today, however, listing in the phone book is voluntary.

Today there are 125 regional editions with a total circulation of 32 million copies. The largest edition is in Berlin. Total industry sales in 2006 were estimated at around € 1 billion.

Online editions of the telephone books offer the user new services that make it easier to find entries. Statistics show that the number of hits on the online offer is increasing continuously. One is also app for iPhone , Windows Phone , BlackBerry and Android - smartphones offered. In addition to the comprehensive telephone directory compendium, special directories such as the “TB Guide” for the cities of Berlin, Hamburg and Munich have been published since 2014 (as of January 2015).

According to Section 78 (2) No. 2 of the Telecommunications Act (TKG) in conjunction with Section 104 and Section 45m TKG, the publication of a printed public subscriber directory, which is usually once a year, has been defined as a universal service and thus as an indispensable basic service . Deutsche Telekom AG is currently providing universal services in the Federal Republic of Germany. For this purpose, Telekom uses its subsidiary DeTeMedien GmbH in cooperation with telephone book publishers and fulfills this obligation with the annual publication of "Das Telefonbuch".

The first telephone directory in Austria was published on June 15, 1881. It was an advertisement in the humorous folk newspaper Kikeriki , which contained only a few entries from celebrities. The first official directory with all connections appeared at the end of 1881 with the opening of the first Viennese telecommunications center. The current Austrian phone book can be accessed online.

In 1880 the first telephone directory in the city of Zurich appeared as a subscriber list of the then "Zurich Telephon Society" with just 98 entries. Basel followed in 1881 and published its own directory of participants. The telephone directory developed rapidly in Switzerland. In 1900 there were 38,000 entries, in 1959 there were one million and today around 4.3 million entries.

The Swiss phone book is also available online at local.ch , search.ch , help.ch and www.zip.ch and for access from mobile phones, for example as a mobile app from local.ch and search.ch for smartphones and tablets.

The new regional phone book Local Guide published by local.ch has been available since 2013 . With around 100 regional editions, this printed telephone book replaces all previous telephone books in Switzerland. The local guide contains the well-known yellow and white pages with the telephone numbers and addresses of companies and private individuals in Switzerland. In addition, the local guide offers an editorial section with information about the region. The Local Guide is printed on 100% recycled paper.

Yellow.com has a directory of telephone books from all over the world. Alternatively, there is the Phonebook of the World .

The participants can be sorted by location. There are so-called “ yellow pages ” for many telephone books , in which commercial subscribers are sorted by branch .

The treatment of umlauts when sorting the names is noteworthy. It differs on the one hand from lexicons and on the other hand between different German-speaking countries, see → Alphabetical sorting .