Driving license in the Federal Republic of Germany , issued from January 1, 1999 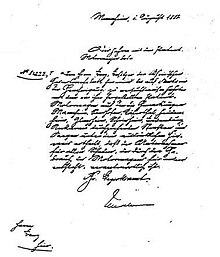 The world's first driver's license, issued on August 1, 1888 by the Grand Ducal Baden District Office in Mannheim to the automobile inventor Carl Benz

Driving license No. 1 of the Innsbruck municipal authorities , issued for Gottlieb Wiederkehr, the chauffeur of Duke Eugen von Österreich-Teschen

Driver's license for August Freudenberger from 1911, issued by the Bolzano City Administration

In Germany one includes license information on the granting of a license in Austria to grant a steering [he] authorization . In Switzerland , the name of this document is driving license (colloquially ticket , billet or Permis ), it shows the driver authorization to.

By contrast, is driving , steering [he] authorization or driving authorization an administrative act, that is the official license to drive motor vehicles (Switzerland: motor vehicles ) on public roads, paths and squares. It is tied to a specific type of vehicle - the vehicle  class: Anyone who is authorized for a class has the right to drive a vehicle of this class. It is issued by the competent authority and is linked to the fitness to drive and proof of competence in the form of a driving test ( Swiss High German : Führerprüfung ), in Germany according to the Road Traffic Act (StVG) and the Driving License Ordinance (FeV), in Austria according to the Motor Vehicle Act (KFG) and the Driving License Act (FSG) and in Switzerland according to the Road Traffic Act (SVG) and the Traffic Licensing Ordinance (VZV).

The around 110 different driving license models within the European Economic Area (EEA) have been replaced by the uniform European driving license in credit card format since January 19, 2013 according to current EU law . Since this date, only this may be issued for the new issue. Old driving licenses have transition periods; However, the member states of the EEA must ensure that by January 19, 2033, all driving licenses issued or in circulation meet all requirements of the current European Driving License Directive.

The starting age for a driver's license in the other classic immigration countries of Canada , Australia and New Zealand is similarly low, but with requirements for the driver .

Driving without a license

When driving a motor vehicle on public traffic , the required driver's license must be carried. Additional certificates of competence are also required for journeys in the military, in rescue transport, for dangerous goods or heavy transports, in the taxi or rental car industry.

Not having a driver's license with you is a traffic offense in many countries . Not having the appropriate driver's license can be punished more severely. Not owning it can be based on never having passed the relevant tests or having your driving license revoked . Driving licenses can be withdrawn because of traffic or other offenses, can also be removed immediately because of heavy alcoholism and can also be handed over again after sobering up.

It is not necessary to have a driver's license to register a motor vehicle in person. The vehicle must then be driven by another person.

Driving without a license