(The StVZO has already been partially replaced by the FeV and the FZV and is to be finally abolished with the introduction of a Vehicle Approval Ordinance (FGV) and a Vehicle Operating Ordinance (FBV).)

regulates liability for personal injury and property damage in the event of a traffic accident ( strict liability ).

contains penalty and fine regulations, for example for driving without a license , misusing license plates and driving under the influence of psychoactive substances (0.5 per mille limit, § 24a StVG).

includes the regulations for the register of fitness to drive (entry, administration and deletion of the " Flensburg points ").

deals with the vehicle register, which contains data on vehicles and vehicle owners of all vehicles registered in the Federal Republic of Germany.

regulates the local and the central driver's license register , which manages the data of all driving licenses issued in the Federal Republic of Germany and documents whether they are still valid or withdrawn. 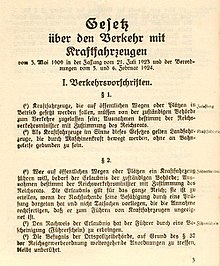 The forerunner of the German Road Traffic Act was the “Law on Traffic with Motor Vehicles” of May 3, 1909, with which the Reich legislature exercised general legislative competence in traffic law for the first time. The content was primarily the regulation of liability in traffic accidents with motor vehicles , which became more and more urgent with the increase in motorization. The law also contained individual rules of conduct in road traffic.

As a successor, the Road Traffic Act (StVG) of the Federal Republic of Germany came into force on January 23, 1953 . In the meantime, some provisions of the law have been changed to take into account current legal developments. With the exception of multiple adjustments to its upper limits , liability is largely unchanged today from the 1909 regulations.