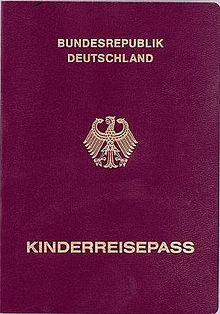 The children's passport is a passport that is usually issued for children up to the age of 12. 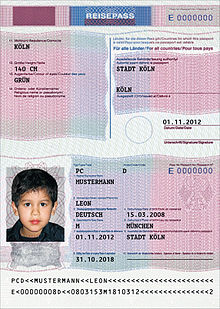 The child's passport is in Germany a document to German nationals can be issued up to 12 years.

Without exception, it is provided with a passport photo of the owner, even for newborns. The picture must be biometric , but the requirements for infants, toddlers and children are not as strict as for adults, as can be seen from the photo sample board.

The document is valid for six years, but no longer than 12 years of age. It can be extended up to the age of 12 with a new passport photo. The prerequisite for this is that the extension is requested within the original period of validity. After the validity has expired, a new application is required. The fee for the exhibition is 13 euros, for the extension 6 euros.

The children's passport complies with the recommendations of the ICAO and is recognized worldwide. A valid electronic passport is required for visa-free entry into the USA ; a visa is required for children’s passports .

Child entries in a parent's passport lost their validity on June 26, 2012.

Since then, children have to have their own children's passport or a passport when crossing borders, depending on the travel destination. In individual cases, an identity card is sufficient , for example in the Schengen area . Binding information on whether the child's passport is recognized in the country of destination of the trip can only be given by the authorities, e.g. the embassy or consulate of the country of travel .

Parents with a surname that is different from the child

With the elimination of child entries in the parents' passports, it is now more difficult for parents whose last name does not match that of the children to prove that the child traveling with them is their own. If necessary, this evidence can be provided by a birth certificate or - in the case of married parents - by submitting a marriage certificate or - in the case of unmarried parents - by submitting the joint custody declaration from the youth welfare office .

Child ID
Until 2006, child IDs could be issued to all German citizens under the age of 16. The ID was used as identification and passport for children. It could be issued at birth and was valid until the age of ten. A passport photo was not actually mandatory until then, but had to be included for travel to some countries (by and large, the countries that require a passport for adults). A passport photo was required after the 10th birthday; if the child's ID did not previously contain one, it could be extended by inserting it; if it already contained one, it had to be replaced by an ID card with a new passport photo. The name, date of birth, place of birth, nationality and place of residence were entered. Children's ID cards issued before 2006 remain valid until the child is 10 or 16 years old.

The prerequisites are Austrian citizenship and that the child must not have reached the age of 12 at the time of application. Entering children in a parent's passport has not been possible since June 15, 2009. Existing child entries remain valid for three years and will automatically expire on June 15, 2012. When a child's passport is issued, any entry that may exist will be deleted.