Passport photo of Ms. Mustermann in a German identity card

A passport photo is a photograph that is used for a - mostly official - personal document. Internationally, the regulations are very different.

A passport photo is biometric if it meets certain requirements that help facilitate facial recognition based on the image. Common requirements are:

Whether a passport photo is biometric has nothing to do with whether it is stored electronically on the passport.

National requirements for the passport photo

Current requirements in Germany for the ePassport and the nPA

The following applies in Germany: The issuing authorities require a picture format of 35 mm × 45 mm (without border) for passport photos for issuing ID cards , passports and driving licenses .

Bundesdruckerei offers information online with a photo sample board . 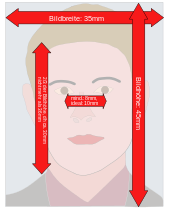 Scheme of a passport photo with the dimensions specified for Austria

With the introduction of biometric passports in March 2006, new criteria for passport photos apply. The most important of these are:

Photo quality and other requirements

The International Civil Aviation Organization (ICAO) has attached Photo Guidelines (Photograph guidelines) to ICAO Doc 9303 . It is a further development of the “Guidelines for taking photographs to maximize facial recognition results” from 2004.

When applying for an identity card in Germany, the Federal Ministry of the Interior intends that the photo must be taken in the authority due to otherwise possible morphing .

A little later this was revised again .

If a passport photo was created by a photographer, his rights must be taken into account when using the photo. This may have consequences when the image is used on the Internet ( § 60 , § 19a UrhG ). This cannot apply to passport photos from the machine, as no clear source evidence is possible - they could theoretically have been taken at any location.