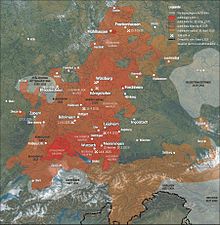 Riots and battles
during the Peasant War

1525 is the central year of the German Peasant War . After the first uprisings had already taken place in 1524 , leaders such as Matern Feuerbacher , Wendel Hippler and Florian Geyer led to organized mass uprisings . Initially, Martin Luther was also benevolent towards the cause of the peasants, only when there were violent riots among Jäcklein Rohrbach and his gang, he turned away from the peasant uprisings with the text Against the robbery and murderous gangs of the peasants .

However, due to their poor armament and military organization, the uprising soon collapsed and was cruelly suppressed , especially by Georg Truchsess von Waldburg-Zeil , known as Bauernjörg. Only the tightly organized black heap of Florian Geyers can evade complete annihilation.

In the Battle of Pavia during the Italian Wars for supremacy on the Italian peninsula, the French King Francis I suffers a crushing defeat against a Habsburg army and is captured by Emperor Charles V. His mother Luise of Savoy then takes over the reign of France . 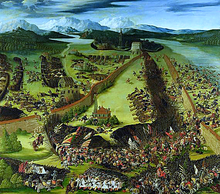 The regent takes over the rudder of state ; anonymous painter of the 16th century 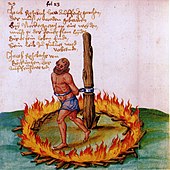 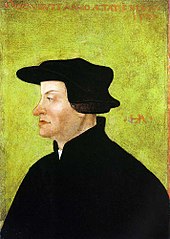 Western Europe at the time of Charles V, 1525