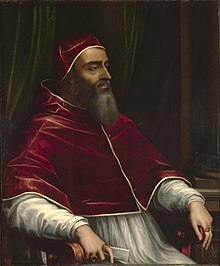 Pope Clement VII in a painting by Sebastiano del Piombo

Giulio de 'Medici was a probably illegitimate son of Giuliano di Piero de' Medici from Florence, who at the time of his son's birth had already fallen victim to the Pazzi conspiracy , and Fioretta Gorini. However, recent studies report a legitimate marriage.

Giulio de 'Medici joined the Order of St. John at an early age and later became prior in Capua . His cousin, Pope Leo X , declared him a Medici son by secret marriage. Giulio de 'Medici was able to take on numerous benefices :

On November 18, 1523, the conclave elected him as the new Pope. The coronation took place on November 26th, shortly after the feast day of St. Clement I. The papal name should also indicate the direction of the pontificate ( clementia = mildness), as later also with the Popes Clement VIII. , Clemens IX. and Clemens XI. Throughout his pontificate , Clement VII strove to increase the secular power of the papacy and the Medici family.

Since 1521 the Spanish king and Roman-German emperor , Charles V , waged war with Francis I of France for rule in northern Italy . Clement VII initially wanted to remain neutral in this conflict, but in the following years he approached Charles V's side. In 1526, however, after the capture of Francis I, he ended the alliance with Charles V and joined the League of Cognac . The imperial troops then conquered Rome and it came to the Sacco di Roma (sack of Rome).

After he had saved himself in the Castel Sant'Angelo , he had to surrender after a long siege and the threat of his opponents in Florence to kill Caterina de 'Medici . He was captured and the Medici were driven from Florence. On June 29, 1529 concluded Clement VII. With Emperor Charles V the peace of Barcelona . He received control of the Papal States back and the Medici Florence. The impending First Siege of Vienna by the Turks in the autumn of 1529 contributed to the conclusion of peace between Clement VII and Emperor Charles V. Finally, on February 24, 1530, Clement VII crowned Charles V in Bologna .

For the Medici family, the Pope's work could be described as quite successful, so he succeeded in having Alessandro de 'Medici (probably his illegitimate son) with the daughter of Charles V Margarethe of Parma and his relative Caterina de' Medici , the only child from Lorenzo di Piero de 'Medici to marry the future King of France Henry II and finally to bring the previous Republic of Florence back under the control of the Medici with the help of Charles V (acceptance of the ducal title by Alessandro de' Medici in 1532).

Because of the Reformation , Emperor Charles V asked Clement VII to convene a council , but the Pope did not obey. The demand of Henry VIII. , His marriage to Catherine of Aragon to divorce, Clement VII refused. Using the now well-known by formulating Non possumus , so that the English king himself and his country broke away from the Pope. It came to the separation of the Church of England and thus to another church split.

Clement VII died on September 25, 1534, probably of mushroom poisoning ( green leaf agaric ), and was buried in the church of Santa Maria sopra Minerva .