Coat of arms of the Counts of Helfenstein

The House of Helfenstein were an old Swabian noble family that after the above Geislingen situated Helfenstein Castle was named. 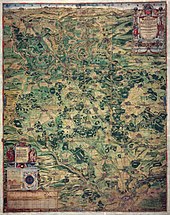 The Helfenstein rule in Ulm around 1651

The first verifiable members were Eberhard (around 1100 AD) and his son of the same name (1140). The Helfensteiner had extensive goods in the upper and middle Filstal , on the Swabian Alb , in Ulm , in Heidenheim an der Brenz and in the Danube valley around Sigmaringen . Some members of the house named themselves after the castle Spitzenberg bei Kuchen .

Also some (including Oswald Gabelkover and Heinrich Friedrich Kerler) count the gentlemen von der Fils among the ancestors of the family from which Gebhard was supposedly Archbishop of Salzburg as early as 1060 .

The most important representatives of this family were Count Ludwig I and Count Ulrich V. von Helfenstein. Count Ludwig I often attended the court of Emperor Frederick I , signed the Constance Peace Treaty of 1183, took part in the emperor's crusade and probably also worked for his sons, Emperor Heinrich VI. and King Philip of Swabia , court trip. At the same time Gottfried von Spitzenberg was Bishop of Würzburg and Chancellor of the empire.

The Helfensteiner acquired through the marriages of Count Ulrich II. With Agnes, a daughter of Count Rudolf I the Scheerer von Tübingen-Herrenberg , the rule of Blaubeuren and with Willibirg von Dillingen large parts of the possessions of the Counts of Dillingen around Ulm and thus reached the height of their power.

The family line was divided in 1356 under Ulrich V the Elder into the line Helfenstein- Wiesensteig and his cousin Ulrich VI. the younger one in the Helfenstein- Blaubeuren line . The latter sold Blaubeuren in 1457 and Heidenheim in 1448 to Württemberg and in return acquired the rule of Wellheim in 1458 and Hexenagger in 1485 . The line died out in 1517 with George I.

Count Ulrich V played a major role at the court of Emperor Charles IV in Prague in the second half of the 14th century . The emperor founded his marriage, which increased his rank, but also had serious consequences, to Duchess Maria Kotromanić of Bosnia, sister of the King of Bosnia, Stjepan Dabiša , who was blamed for the rapid financial decline of the Helfensteiners. In this presentation, however, the older research tradition deliberately overlooks the fact that the Counts of Helfenstein have been in constant financial need since the change from the 13th to the 14th century. In addition, several waves of plague caused massive economic slumps in the second half of the 14th century, which led to pledges in the 1370s and the sale of the so-called Lower Lordship of Geislingen / Steige with the Helfenstein Castle and the central Filstal in 1396 to the imperial city of Ulm.

1562/63 took place in the rule Wiesensteig under Count Ulrich XI. von Helfenstein-Wiesensteig (1524–1570, ruled 1548) a large witch hunt took place, in which at least 63 women and men were executed as " witches and fiends ". Count Ulrich XI and his brother Sebastian († 1564, reigned 1548) introduced the Lutheran Reformation in their county in 1555 . After 1564, Count Ulrich XI. under the influence of his wife Katharina von Montfort-Tettnang (around 1536–1594) he returned to the Catholic faith and in 1567 carried out a Counter-Reformation .

With the death of Count Rudolph III. On September 20, 1627, the rule of Wiesensteig also expired and one third each, through the inheritance of the daughters, went to the Princely House of Fürstenberg , to the Landgraviate of Leuchtenberg and to the Counts of Oettingen-Baldern . The latter two rulers sold their shares in 1642 to Kurbayern . As early as 1396, large parts of the county of Helfenstein-Wiesensteig (with the exception of the Wiesensteig rulership itself) had been sold to the imperial city of Ulm due to financial hardship. In 1546 the Wiesensteiger Line had acquired the rule of Gundelfingen with Hayingen and Neufra (Riedlingen) and in 1594 the rule of Meßkirch and the castles Wildenstein and Falkenstein , which all fell to Fürstenberg in 1627.

Schweikhard von Helfenstein (1539–1599), the son of Count Georg II. (1518–1573), served as President of the Imperial Court of Justice, like his father, as an author, publicist and active promoter of Catholic reform .