The monastery Blaubeuren in Blaubeuren was founded in 1085 to the monastery of the Benedictine Order in the immediate vicinity of the blue pot . It was largely rebuilt in 1466–1501. After the Reformation , the monastery fell to the dukes of Württemberg and became a Protestant seminary. In the 21st century, the late medieval monastery buildings are used as an old-language grammar school; In addition to the Maulbronn Monastery, they are the location of the Maulbronn and Blaubeuren Evangelical Seminars . The cloister, the monastery church and a museum on the site have been preserved and are free to visit. 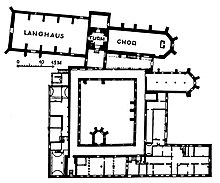 The monastery was founded around 1085 by Anselm and Hugo Count Palatine von Tübingen and Sigiboto von Ruck, a close relative, at the church that was already in this place and dedicated to John the Baptist . The monastery was settled with monks from Hirsau Monastery , which also provided the first abbot (Abbot Azelin) for Blaubeuren. In the first decades of its existence, the monastery was given numerous possessions and probably experienced a certain heyday, although it did not emerge culturally or in the church disputes of that time. In the 12th century, the monastery church was rebuilt in Romanesque style, which was completed in 1124. After the Ruck died out in the same century, the bailiwick of the Palatinate Monastery remained until it was bequeathed to the Helfensteiners in 1282.

There was a temporary decline in the 14th and early 15th centuries and several crude crimes were reported. In 1347 the prior and in 1407 the abbot are said to have been murdered by monks . At the same time, the plague raged in Central Europe, and the monastery was probably temporarily depopulated and lost its property. However, through several foundations, the monastery was able to be restored and regained possession of its goods.

After numerous pledges from 1368 onwards, the Helfensteiners finally sold the Klostervogtei and town of Blaubeuren to Württemberg in 1447, which had a great influence on the election of abbot. The monastery quickly gained in importance. In 1451 the church reform in the monastery was carried out by monks from Wiblingen. In 1456, Ulrich Kundig, Abbot from Blaubeur , was a member of the General Chapter of the Benedictine Order, whose presidium was subsequently occupied several times by monks from Blaubeur. Kundig's successor, Abbot Heinrich III, was also outstanding . Fabri († November 1493), who is said to have co-founded the University of Tübingen in 1477 and to whom the fundamental new construction of the monastery complex goes back. His coat of arms can also be found in many places in the monastery: a horseshoe and crossed nails indicate that he came from a family of blacksmiths.

In the period that followed, almost the entire monastery was rebuilt. Fabri's new building, begun in 1466, had become necessary due to a devastating fire and was probably financially supported by Count Eberhard im Barte von Württemberg. The cloister was first built until around 1484. From about 1484 to 1491 the new building of the choir of the monastery church followed, which was completed in 1493 with the consecration of the high altar. The western parts of the church were then built by 1501.

In the course of the Reformation, Blaubeuren was reformed in 1534 by Duke Ulrich von Württemberg , who then moved into the monastery. While the abbot Ambrosius Scheerer stayed in the monastery as administrator until his death, the prior and monks were temporarily exiled to Markdorf. In the time of the Augsburg interim they were able to return, but the Augsburg Religious Peace in 1555 confirmed the legal possession of Duke Ulrich's son Christoph von Württemberg , who made the monastery the seat of a Protestant monastery school in 1556. The Catholic monks lived temporarily in the monastery with the Protestant students until their abbot Tubing was arrested and they were expelled. From 1563 to 1570, Matthäus Alber was the first Protestant abbot and head of the monastery school.

The monastery buildings have been owned by the Evangelical Seminary Foundation since the end of the 20th century. The cloister of the monastery with the Margaret Chapel, the chapter house and the choir of the monastery church with the Petri and Urban Chapel can be visited.

Design of the monastery church

The church is composed of five structures: nave, central tower, two transept-like chapels and elongated choir . The nave, which consists of five bays , is covered with a star net vault and has five not very deep side chapels on both long sides. The nave is strictly separated from the choir by the mighty central tower and a rood screen in the tradition of the mendicant orders . This is spanned by a mesh vault and has a polygonal apse with a three-eighth end. Striking and unusual (especially for the late 15th century, from which the new church was built) is the complete isolation of the choir from the nave. Possibly these are reminiscences from the early days of the monastery and the church, when it was under the strong influence of the Hirsau reform , which in turn was dependent on the cluniac reform . A feature of these reforms, which also had an impact on the structure of the churches, was the strict separation of monastic choirs for the "spirituales" and the lay church for the "seculares".

Equipment of the monastery church

The choir of the church contains important works of the Ulm School and the late Gothic German carving, which were created from 1490 in the course of the new construction of the church and the choir.

The high altar with movable wings was consecrated in 1493 and completed in 1494. The monumental shrine figures as well as the reliefs on the inside of the inner wings and the burst figures were created in the workshop of Michel Erhart , probably with the assistance of his son Gregor Erhart . Various painters finally took over the panel paintings of the altar wings and the setting of the sculptures in Hans Schüchlin's large workshop in Ulm . The work was carried out by Schüchlin's son-in-law Bartholomäus Zeitblom and the Memmingen painter Bernhard Strigel , among others . 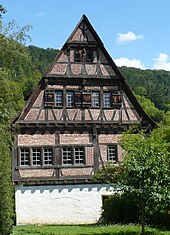 Bath house in the monastery grounds

The Blaubeurer Heimatmuseum is housed in the former bathhouse of the monks, and the Schubartstube literary memorial in the former administrative building .

The model construction company Faller has since early 2018 for model trains of track size N (scale 1: 160) is a simplified form of Blaubeuren Abbey as a kit on.