The Gebr. Faller limited liability company factory for quality toys is a toy manufacturer from Gütenbach in the Schwarzwald-Baar district in Baden-Württemberg , which specializes in model railway accessories. The company was founded by Edwin and Hermann Faller.

Edwin and Hermann Faller founded the company in 1946 under the name Firma Hermann Faller . In the beginning, simple wooden construction kits were made with which, for example, model houses could be built. The company got into trouble in 1948 at the time of the currency reform because people no longer had enough money for the construction kits. The company was able to stay afloat with the production of clothespins. Then the idea came up to produce accessories for model railways of nominal size H0 . This is how the company developed into a world market leader for model railroad accessories with almost 200 employees.

In 1997, the model making company POLA was taken over, some of whose products were included in its own range. In H0 and N, old POLA models are now offered under the Faller label , the name POLA is still used in G gauge .

On August 28, 2009, the company filed for bankruptcy due to impending insolvency ; The Stuttgart attorney Volker Grub was appointed provisional insolvency administrator . In April 2010, the insolvency proceedings were successfully concluded.

In 2012, the Bloch: The Stranger was filmed on the premises .

The miniature worlds in the plant are an exhibition and museum for the public.

The first and by far the most important product group of the company were and are model buildings and matching model building accessories. The first houses were made from cardboard as prefabricated houses in the Gütenbach factory or by home workers and from 1954 they were also brought onto the market as kits for the nominal size H0 . The first Faller catalog (D50) appeared in 1950. The 1952 catalog then had 18 pages. These first models are sought after by collectors today. From 1953 first model parts were then Models of plastic produced (polystyrene) and, initially approximated as a so-called background models with greatly reduced scale to the nominal size N is. Some cult objects from the 1950s and 1960s are the ready-made models sawmill 299, Flüelen 111 station, windmill No. 25/233 and in the following era of mixed construction and plastic, the Cortina 113 / B-113 train station, the famous villa in Ticino B-271, the small goods shed B-156 and the wood store B-288. Of the electromechanical functional models, the watermill B-225, the modern fountain B-160 / B-231 and the Autorast B-215 have cult status. The model range was officially supplemented in 1964 by the nominal size N (scale 1: 160), later by the nominal size Z (scale 1: 220) and the nominal size II (scale 1: 22.5). The latter nominal size has been carried under its brand name since the takeover of POLA.

Faller models often have real role models, mainly models from the local Black Forest and other parts of Baden-Württemberg. Well-known models of real models are the Mäulesmühle , the Hexenlochmühle , the Martinstor in Freiburg , the Römerberg-Ostzeile in Frankfurt am Main , the "world's largest cuckoo clock " from Schonach , the Bonn main station and the old fire station in Mannheim .

Today there is a lively collector's scene around Faller building models and old and rare models in good condition or unbuilt in the original box are fetching high prices.

In the 1970s, Faller Hittrain was a toy train with a model gauge of 32 mm for children with 0 gauge tracks . The tracks and locomotives were made of plastic. The battery-powered locomotives were controlled using controls. The special feature was that, thanks to operating elements that could be easily integrated into the rail parts, the route of the trains could be programmed before the start of the journey and controlled at the specified points during the journey. Control elements were z. B. Change of direction of travel (orange arrow), stop and continue in the direction of travel (green arrow with control lever), stop and continue in the opposite direction (red arrow with control lever), stop or drive through (signal), stop or drive through or change of direction (direction control track with lever up ). Standardized straight lines, curves (twelve for a full circle), switches and crossings were available as track elements . This track was later developed into Playtrain and eTrain .

Faller Playtrain was the first further development of Hittrain and, along with the tracks, also took over the model gauge and the drive system. However, it had a larger structure, so that the railway now roughly corresponded to the nominal size 1 - i.e. a narrow-gauge railway of gauge Ie. The larger structure was used to integrate the first Playmobil figures , new in the 1970s, into the game. For example, there was an "Intercity" in which Playmobil figures could sit. The same tracks were used, only the switch levers were shortened to gain space for the larger superstructures.

Faller eTrain again had the same model gauge as Hittrain and Playtrain and superstructures the same size as Playtrain. However, this railway now used tracks with brass rails on plastic sleepers. Like other electric model railways, the trains could be controlled via external regulating transformers. 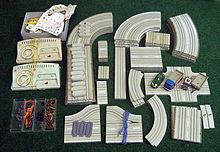 AMS (Auto Motor Sport) is an electrically operated model car system ( slot car ) and was first produced in 1963 using purchased American licenses. AMS was originally intended as a road traffic supplement for model railways of nominal size H0, which is indicated by the range of products offered (road elements: road crossings, traffic lights, construction sites, level crossings , junctions; vehicles: series cars and trucks). This and the unusual yardstick distinguish Faller AMS from the other common car racing tracks . Due to the technology at the time (size of the electric motors), the cars with a scale of approx. 1:65 instead of 1:87 were, however, a bit too big for the nominal size H0 and corresponded more to the S gauge .

Car loading with AMS vehicles; note the differences in scale

A playful combination with the model trains of nominal size H0 through level crossings and a functioning car loading system was also planned. Over the years, however, more and more racetrack elements were offered such as lap counters, banked turns and loops.

In 1975 the AMS system was expanded to include vehicles from the US manufacturer Aurora and renamed to AMS racing . From then on, the company's own vehicles were largely sold as separate engine chassis and body packs and were intended to complement the container loading game and car-train loading that were offered until 1980/1981 . AMS racing was offered in the catalog until 1985, most recently even with vehicles from the company TYCO (USA). For a few years, a bus variant for the N track was also produced, derived from the AMS system using motors installed on edge. This system only had different buses as vehicles, because an inexpensive production of electrically powered N-scale passenger car models was not possible at the time. In 1986 AMS was withdrawn from the Faller program.

Although the AMS vehicles no longer meet today's requirements in terms of scale, technology and model fidelity, there is a large group of collectors worldwide, as AMS is a classic case of a closed collection area: All products are known and the desire for completeness is still financially feasible even if some products, especially if they are rare and / or as good as new, now achieve high collector prices.

Faller Hit-Car was a motorless racetrack system in which the same principle as with Hot Wheels from Mattel 's vehicles catapults were launched. The cars were the same size as the AMS models. Between 1969 and 1979 numerous track elements (loops, switches, etc.) and vehicle models were offered. The death of one of the Faller brothers ended the further development of the model series.

In 1967 Faller added the Faller Club Racing international car racing track system in the then popular nominal sizes 1:24 and 1:32. In addition to some vehicles, a separate rail system was also developed for this purpose, which differed from the systems of other manufacturers in particular due to a continuously glued conductor strand. The further development was stopped in 1968 and the system was taken off the market.

This system, which was first presented at the Nuremberg Toy Fair in 1989 and is still in production today, is a modern successor to the AMS system. However, it uses much more modern technology and the vehicles are in 1/87 scale; later vehicles in the 1/120 ( TT ) and 1/160 (N) scales were added. The power is supplied by batteries in the vehicle, the steering by permanent magnets on steerable front axles with the help of wires embedded in the roadway.

Faller also offered model aircraft kits from the 1950s to the 1970s. The 1: 100 scale was chosen, which was not offered by many manufacturers. The model range also included special models such as B. the Wright biplane or the German missiles V1 and V2. There were also models of the German air force from the Second World War (Bf 109, He 111, Ju 88) as well as helicopters, transport aircraft and commercial aircraft from the post-war period. Civilian models such as the Caravelle passenger plane or sport aircraft and gliders were also on offer.

The models were not true to the original, but skilled hobbyists used these basic kits to create variants. A highlight was the 3–6 volt AC electric motor that moved an attached propeller. So could z. B. a He 111 can be equipped with rotating propellers. This engine was also used by model makers in other scales.

From autumn 2006, Faller produced a go- kart track in the nominal size H0 with two parallel, winding and crossing lanes. The vehicles supplied were supplied with power by a double-lane metal wire and complied with the AMS system. Since it was a replica of a racing operation, the elements from road and rail traffic were omitted. Production was stopped again.