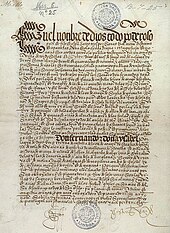 First page of the contract

The first battle of Acentejo

When trying to conquer Tenerife as the last island in the Canary Islands , the Spaniards suffer a heavy defeat against the Guanches under Alonso Fernández de Lugo . The site of the battle was then named La Matanza de Acentejo ( The Acentejo Slaughter ). 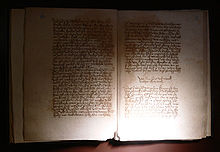 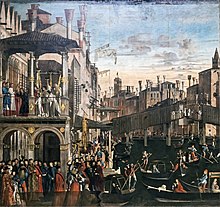 Vittore Carpaccio : The miracle of the cross on the Rialto Bridge 1494

Sebastian Brant's moral satire Das Narrenschyff ad Narragoniam is printed for the first time by Johann Bergmann von Olpe . This work, which drafts a typology of over 100 fools on a ship heading for Narragonia and thus holds up a critical mirror to the upside-down world through an entertaining description of its vices, will be the most successful German-language book before the Reformation. The Narrenschyff is immediately praised in the highest tones by contemporaries, especially by the early humanists of the Upper Rhine. 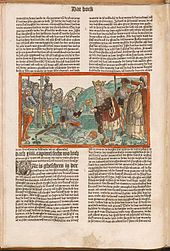 Page of the Lübeck Bible 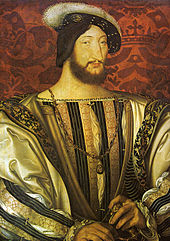 Jean Clouet: Franz I, portrait from 1527