The death of Sten Sture the Younger on the ice of Mälaren , historical picture by Carl Gustaf Hellqvist , 1880

On January 19, King Christian II of Denmark and Norway beats the former Swedish ruler Sten Sture the Younger in the Battle of Bogesund , who died of his injuries on February 3 . Sten Sture's wife Christina Gyllenstierna continues the resistance with the support of the Swedish nobility, but after a four-month siege of Stockholm they submit to the new king in return for a full amnesty.

On May 31st, Gustav Wasa , a supporter of Sten Sture and former hostage of Christian II , arrives secretly in the Swedish city of Kalmar with the help of Lübeck . There he is welcomed in a friendly way, but receives no support from the Swedish aristocrats, who have largely decided to join the new king.

Christian II is crowned king in Stockholm on November 4th, reuniting the entire Kalmar Union under one ruler. On the third day of the coronation of a spiritual court is established and about 100 former opponents Christians, including Joakim Brahe , Gustav Vasa's brother, and Gustav's father and other relatives, of heresy are due to the deposition of the Archbishop, accusing Gustav Trolle accused and on 8 . and on November 9 on the executed the marketplace. Female members of the Sture and Wasa families, such as Sten Sture's wife Christina Gyllenstiernaand Gustav Wasa's sister Margaret Eriksdotter Wasa , are abducted and imprisoned in the Blue Tower in Copenhagen. The Stockholm bloodbath heralds the end of the Kalmar Union. The Swedish rulers send their two best skiers on their way to bring back Gustav Wasa, who is already on his way to Norway.

The negotiations between the khanate of the Crimean Tatars under Mehmed I. Giray and King Sigismund I of Poland , also Grand Duke of Lithuania as Sigismund II , were successfully concluded on October 25th . If necessary, the armistice treaty provides for joint military actions against Moscow , which seeks to protect itself from surprise attacks by expanding fortified structures on its southern border (including the completion of the Kremlin in Tula and the Tulaer Verhau in spring 1520).

After managing the Duchy of Mecklenburg for several years after the death of their father Magnus II , Heinrich V and Albrecht VII split up the land in the Neubrandenburg house contract on May 7th . The duchy is still seen as a whole. The division has become necessary because the brothers have different ideas about how the Reformation should be dealt with in their country.

Coronation of Charles in Aachen

Charles V, elected last year, travels from the Molins de Rei monastery near Barcelona, ​​where he fled from the plague, via England and the Netherlands to the Holy Roman Empire. He is on October 23 in Imperial to Aachen by the archbishop of Cologne, Hermann of Wied the Roman-German king crowned and then calls himself King of the Romans, elect Roman emperor, Augustus always. Pope Leo X consents to the use of this title on October 26th .

Ulrich Zasius is redesigning Freiburg's municipal law. Its amalgamation of Roman and German law formed the basis of an independent legal and judicial system in the city of Freiburg until the 19th century and is also considered a model for other city and land rights beyond Freiburg. In the city law he created, Jews are explicitly discriminated against. They are not allowed to testify in legal matters and have no community with Freiburg citizens. This is punished with two silver marks and, in the case of repetition, with the expulsion of the citizen.

King Henry VIII of England and the German King Charles V , who is on the way to his coronation (see above), meet in Dover on May 26th . Charles, who rivals France, tries to win Heinrich as an ally. Since such an alliance would pose a serious threat to France , French diplomacy comes into play. On April 13th a meeting between Charles Somerset, 1st Earl of Worcester and Galiot de Genouillac takes place in front of the English occupied Calais , at which a meeting of the French and the English king in theVal d'Or is agreed between the English Guînes and the French Ardres .

Field of the Cloth of Gold, James Basire, 1774, engraving after a contemporary oil painting

On June 5th , Henry VIII arrives in Guînes, while the French King Francis I moves into his residence in Ardres. Two days later , King Henry VIII of England and King Francis I of France meet for the first time at the so-called Camp du Drap d'Or / Field of the Cloth of Goldtogether to improve relations between their two countries. The list of those present, written down on behalf of Henry VIII, counts around 4,000 people and 2,000 horses as companions of the English king and around 1,100 companions and 770 horses on the side of the English queen. The program of the following days, consisting of staged tournaments and banquets, makes political actions irrelevant. Between June 11th and June 22nd, tournaments with over 300 participants will take place on the tournament ground, which was built according to a sketch by the English king. On June 24 the magnificent meeting ends again meeting with a handover of gifts and the decision.

Camp du Drap d´Or is considered to be one of the most representative and extravagant rulers' meetings of the early modern period, which stands between efforts for peace on the one hand and a mutual demonstration of power on the other. The desired rapprochement between the two rulers is not achieved. On July 14th, Henry VIII and Emperor Charles V signed a treaty in which they undertook not to enter into an alliance with France.

In Spain begins on April 16 from Toledo of the starting Comuneros revolt against King Charles I , who until 1522 will last. The rebels, led by Juan de Padilla distribute the royal governor Adrian of Utrecht and call in Ávila the Santa Junta de las Comunidades in life. This declares itself to be the provisional government of Spain and the royal council of Charles for deposed. The rebels conquer Tordesillas and free the royal mother, Johanna , who was held there, who then takes part in the meeting of the Cortes , but refuses to sign any edicts. In view of the emerging radicalization of the movement, which the peasants and the urban lower classes have now joined, however, some nobles are keen to stabilize the situation and try to find a compromise with Karl, who has since gone over to a military counterattack . 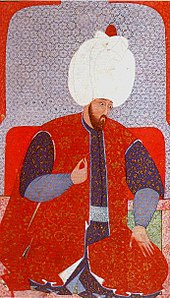 Selim I , Sultan of the Ottoman Empire , who had ruled since 1512 , died on September 21 . His successor is his son Suleyman I the Magnificent, who will rule until 1566 and under whose rule the Ottoman Empire finally rises to a world power.

Probably in the same year, Suleyman I takes his former slave Roxelane as his fourth wife. She quickly developed into his main wife.

Pánfilo de Narváez receives from Diego Velázquez de Cuéllar , the governor of the island of Cuba, the order to arrest Hernán Cortés in Mexico and to take command himself. On April 20, Narváez lands at Veracruz with 19 ships, over 1000 men and 60 horses . He sends three ambassadors to the settlement founded by Cortés, where his commander Gonzalo de Sandoval has them captured and brought to Tenochtitlan .

The arrest of Narváez (bottom left in the picture)

When Cortés received the news that the troops had landed, he appointed Pedro de Alvarado as his deputy in Tenochtitlan and set out on May 20 with 250 men for Veracruz, where he defeated Narváez with a surprise attack and arrested him. He then persuades his soldiers to join him and also takes over his entourage from Narváez, which is attacked by warriors from Texcoco near Zultepec on the way to Tenochtitlan, however, together with local allies . In the following months the approximately 550 men, women and children captured in Zultepec are sacrificed to the gods.

Meanwhile, overburdened Pedro de Alvarado has several thousand people massacred in the courtyard of the Templo Mayor in a panic reaction during the Aztec Spring Festival on May 23 . The angry Aztecs then take up arms, kill seven Spaniards and drive the rest to their quarters in the palace and besiege them there.

Route from Cortés' retreat to the Noche Triste

On June 24th, Cortés and his troops returned to Tenochtitlan, where the situation was quiet for the time being. However, unrest soon breaks out again and the Spanish are again besieged in the palace. On June 30, the Aztec ruler Moctezuma II , who was captured by the Spaniards, was killed by throwing stones when he was trying to calm the angry crowd on behalf of the Spaniards. In the Noche Triste ("Night of Mourning") that followed, the Spaniards attempt to secretly escape from the palace, taking as much gold with them as they can carry. As the Aztecsdiscover the attempt to escape, they attack the Spaniards from several sides. Of the approximately 1,300 Spanish soldiers, only 425 were able to save themselves to the lakeshore, and the allied Tlaxcalteks were practically completely wiped out. After Moctezuma's death, Cuitláhuac becomes the new ruler of the Aztecs. He ordered an army of several thousand men to pursue the defeated Spaniards.

Contemporary depiction of the Battle of Otumba

In the Battle of Otumba on July 14th, several hundred Spaniards defeat the Aztec army. After the death of their commander in chief Matlatzincatl from a targeted attack and heavy losses from repeated attacks by the Spanish cavalry, the Aztec army withdrew. After the battle, which was costly for both sides, Cortés can retreat to Tlaxcala with the few survivors and, with newly arrived reinforcements, begin a large-scale campaign of conquest against the Aztecs. You will receive support from Ixtlilxochitl II , who is in the line of succession to the town of Texcoco , which is located near Tenochtitlan has been passed over several times, and with the help of the Spaniards ultimately ascends the throne.

In autumn, a smallpox epidemic , brought in by the Spaniards, breaks out among the Aztecs , killing thousands of people, including Cuitláhuac . His cousin Cuauhtémoc succeeds him to the throne.

On the Freedom of a Christian, title page

Raphael's tomb in the Pantheon in Rome

Selim I on his deathbed
(miniature from the Selīm-nāme )