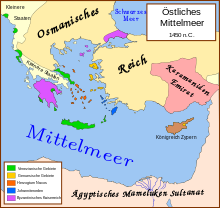 Expansion of the Byzantine and Ottoman empires around 1450

Rumeli Hisarı fortress, built by the Ottomans in 1452 in preparation for the attack

France after the end of the Hundred Years War

Austria becomes an archduchy. The Habsburg Emperor Friedrich III. confirms the (fake) Privilegium Maius and the associated privileges for the Habsburg hereditary lands . In this way, the title of Archduke is anchored in imperial law.

On December 1st, Emperor Friedrich III decides . on the court day in favor of the Teutonic Order under Grand Master Ludwig von Erlichshausen . He declares the Prussian Confederation founded in 1440 to be illegal and orders its dissolution. The decision leads to war in 1454 . 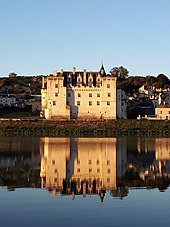 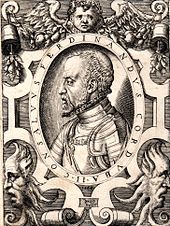