The title of this article is ambiguous. Further meanings are listed under 1400 (disambiguation) .

The city of Würzburg is besieged by the troops of the Prince-Bishop of Würzburg , Gerhard von Schwarzburg , who are supported by the Counts of Schwarzburg , the Counts of Henneberg , the Burgraves of Nuremberg and the troops of Duke Ludwig of Bavaria in the Frankish City War, which has been going on for four years and cut off from supplies, so that the besieged go hungry. Contrary to the warnings of the council, the guilds then decide to venture out to Bergtheim, a four-hour walk away, since the cathedral chapter's grain stores are in the fortified churchyard there. The failure of the alleged 3,000-strong civil army takes place on the night of January 11th (according to other sources on the night of January 4th ). Bishop Gerhard von Schwarzburg, who is sick in the Wasserburg Werneck , learns of the project through betrayal and has the Bergtheim churchyard occupied. The following battle of Bergtheim ends with a crushing defeat of the insurgents and the subsequent execution of their spokesmen.

The electors of Cologne , Mainz , Trier and Palatinate deny Wenzel of Luxembourg government power in the German Empire at a meeting on August 20 at Lahneck Castle near Oberlahnstein , thereby claiming negative voting rights for themselves. You replace him with Ruprecht III. from the Palatinate , which, however, is not recognized by the other electors. He is elected to be the second king of Rhens in the king's chair because the city of Frankfurt am Main has failed to vote because it rejected Ruprecht's candidacy.

Gerhard von Schwarzburg dies on November 9th in Würzburg. Just ten days later , Johann I von Egloffstein , who also took part in the Battle of Bergtheim, was unanimously elected as his successor as Bishop of Würzburg . As part of his financial and administrative policy, he divides the city of Würzburg into four parts and four suburbs, a division that will be maintained for a long time. 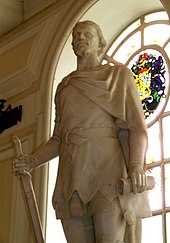