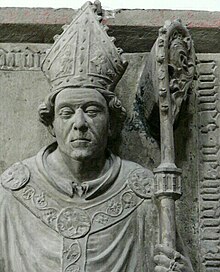 Depiction of the bishop from his epitaph in the Würzburg Cathedral 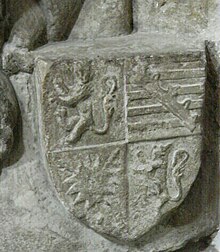 Depiction of the coat of arms on the epitaph

Copper engraving by the Würzburg court and university engraver Johann Salver (* 1670 in Forchheim; † 1738) from the series with Würzburg prince-bishops

Epitaph in the Würzburg Cathedral

Gerhard in the family context

Gerhard came from the family of counts von Schwarzburg . The Schwarzburg , after which the family named itself, is located in the Schwarzatal west of Saalfeld / Saale in Thuringia . He was a son of Count Heinrich XI. von Schwarzburg and his wife Helene, née Countess von Schauenburg . His brothers were Günther XXII., The Teutonic Knight Günther XXIII., The Regensburg canon Günther XXIV., The Würzburg canon and pastor of Kitzingen Heinrich and Günther XXVII., His sisters were the abbess of Stadtilm Mechthild and the prioress of Stadtilm Margarethe.

Gerhard as Bishop of Naumburg

Gerhard was the local chaplain of Emperor Charles IV and also stayed with the Pope in Avignon. Over the years he received canons in Würzburg, Naumburg, Strasbourg, Bamberg, Merseburg and Magdeburg. With the help of his patrons in the cathedral chapter, he was initially elected against the will of the Pope. As Bishop of Naumburg, Gerhard had to resolve internal conflicts and the burden of debt on the diocese increased. With the approval of the cathedral chapter, he sold the last holdings of the bishopric on the middle Elbe, including rights in Strehla , Tiefenau , Hirschstein and Elsterwerda . As a member of the up-and-coming counts of the von Schwarzburg family, he strongly advocated family interests. He was on several diplomatic missions for the Pope.

While Gerhard increasingly came from Schwarzenburg as Naumburg Bishop because of his conflict-ridden and debt-laden policy in distress, it came in Wuerzburg after the death of Albert II. Von Hohenlohe to a double election of Albrecht III. von Heßberg on the one hand and Withego Hildbrandi on the other. Although Albrecht von Heßberg had received fewer votes in the chapter, he received recognition from Mainz and also from the city of Würzburg . Withego Hildbrandi turned to Pope Gregory XI for help . in Avignon , which ultimately led to an exchange of claims with Gerhard von Schwarzburg in Naumburg. While Withego could take office in Naumburg without any problems, Gerhard von Schwarzburg first had to assert himself against Albrecht von Heßberg. Despite the imperial and papal advocacy, he had to fight for his installation on the spot. As the winner, however, he let his opponent Albrecht von Heßberg return to his original position as provost of the cathedral .

Gerhard as Bishop of Würzburg

When the von Trimberg family died out in 1376, their remaining fiefs, including the office of Bischofsheim and the courts of Schlüchtern and the office of Altenhaßlau , fell back to the bishopric and were given by Gerhard to Ulrich IV von Hanau . The previous holdings in Schlüsselberger , including shares in the Castle of Niedersenftenberg , Eggolsheim and Ebermannstadt , were finally sold to the Bamberg Monastery in 1384 .

The time under Gerhard von Schwarzburg was marked by internal conflicts with the up-and-coming cities. Although Gerhard's representatives were involved in a secret meeting in Nuremberg that was directed against King Wenceslaus , after Wenceslaus was captured by his cousin, Margrave Jobst of Moravia , he advocated his release.

In 1396 Gerhard was a member of the Pforzheimer Fürstenbund , which was directed against the Schleglerbund . During his reign, the diocese's considerable debt, which had already started to run, increased further through pledges and feuds. To cope with the debt, new fees were introduced, including the export duty, which led to an uproar among the cities in 1397.

Internal conflicts with the cities

When the bishop restricted the autonomy of the city of Würzburg, there was a successful uprising in 1373. When the bishop called Emperor Karl IV for help, he declared the imperial ban on the city and helped Gerhard in the fight in 1374 to subdue it. In the conflict with the Swabian Confederation , Gerhard held on to the emperor and was supported by him in asserting sovereign claims against the Frankish imperial cities of Schweinfurt , Windsheim and Rothenburg ob der Tauber . In the Battle of Döffingen on August 23, 1388, Gerhard fought against the Swabian League of Cities and then besieged Windsheim and Schweinfurt, albeit without success. The Peace of Eger in 1389 prohibited city ​​alliances .

The Franconian City War of 1397

As a result of overwhelming new taxes and a further curtailment of rights, there was a renewed outbreak of smoldering antagonisms with the city of Würzburg from 1396 onwards. After the bishop had put the city under the ban, citizens of Würzburg captured three clergymen from the Schwarzburg family. Gerhard saved himself to the Marienburg and was two weeks later by his brother Günther XXVII. freed. To hold down the citizens, the bishop had started building a fortress, which, however, was destroyed by the Würzburgers.

In 1397, eleven cities of the Hochstift joined forces with Würzburg to form a federation. After Gerhard had been able to win his house Schwarzburg and the nobility on his side, the cities turned to the new King Wenzel in the hope of gaining recognition as imperial cities. King Wenceslaus agreed to this and sent Bořivoj ze Svinař , but his own position was too weak in the long run. With the superior strength of the neighboring princes, the uprising was put down. The Counts of Schwarzburg , the Counts of Henneberg , the Burgraves of Nuremberg and Duke Ludwig of Bavaria were involved . None of them had any interest in the strengthening of the cities and in the unrest spreading to their areas. They also got their services well paid for by the bishop.

The last resistance in the city of Würzburg was put down after an unsuccessful failure on a granary in the cathedral chapter near Bergtheim . After the negotiations between the Nuremberg burgrave and the city of Nuremberg with the parties in Würzburg had failed, it was decided to starve the city. Due to betrayal, the failure on the granary became known early on and strong troops under the leadership of Johann von Egloffstein had gathered to defeat the Würzburgers. In the destroyed Würzburg, the leaders of the uprising awaited draconian punishments and the bishop pushed through the restoration, combined with high monetary demands for reparation. The four ringleaders were at the gates whacked . In these shattered times there was no significant progress.