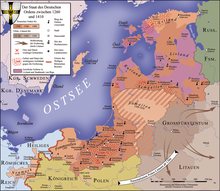 The Teutonic Order and its borders with the Grand Duchy of Lithuania (brown) 1260–1410; The Shamaite (Lower Lithuania) assigned in the Treaty of Salinwerder is shown with pale red hatching

With the Treaty of Salinwerder of October 12, the Teutonic Order and the Grand Duchy of Lithuania conclude a peace and border treaty to end their conflicts. In this contract, the armed conflict between the opposing parties that has lasted for over a century is to be permanently resolved. Represented by the Grand Master Konrad von Jungingen and the Lithuanian Grand Duke Vytautas , there is for the first time a fundamental consensus on the controversial Samogitia and free trade between the previously warring states in the Baltic States . The core of the contract is the complete cession of Samogitia by Vytautas to the Teutonic Order. In the following years, however, the contract turned out to be extremely fragile.