Poggio as a miniature in the Urb. lat. 224, 15th century (Biblioteca Apostolica Vaticana)

Gianfrancesco (or Giovanni Francesco ) Poggio Bracciolini ( Latin Poggius (Florentinus) ; born February 11, 1380 in what is now Terranuova Bracciolini ; † October 30, 1459 in Florence ) was one of the most famous humanists of the Italian Renaissance . He became one of the pioneers of the humanist movement, as he rediscovered some of the most important works of antiquity and made them accessible again to the European intellectual world. His contribution to the development of the Latin script is also important ; he is considered to be the real inventor of humanistic writing. 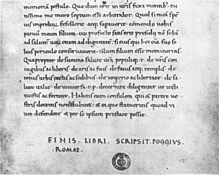 The end of Cicero's fourth speech against Catiline in a manuscript written by Poggio in 1425: Florence, Biblioteca Medicea Laurenziana , Plut. 48,22, fol. 121r 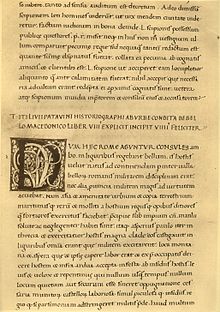 Poggio Bracciolini grew up in the Tuscan village of Terranuova near Arezzo , which was renamed Terranuova Bracciolini in his honor in 1862. The Bracciollini del Val d'Arno or di Firenze family originally came from the small town of Lanciolina or Anciolina near Loro Ciuffenna, which is over 900 m high .

His father Guccio Bracciolini (approx. 1345–1415 / 1420) was a chemist, his mother Jacoba (1359 – after 1426) the daughter of a notary. He studied notarial art in Florence, which also included classes in Latin and rhetoric. During his studies - which he successfully completed in 1402 - he came into contact with the Florentine Chancellor Coluccio Salutati , who recognized his talent and encouraged him. This gave him access to the circle of humanists that gathered around Coluccio in Florence. He copied manuscripts for Coluccio and under his guidance.

In the autumn of 1403, on the initiative of his friend Leonardo Bruni , who was ten years his senior, he went to Rome, where he initially worked as private secretary to the Bishop of Bari Landolfo Maramoldo. Soon afterwards he gained the well-paid post of clerk in the apostolic curia with Pope Boniface IX. He also held this position under Popes Innocent VII († 1406) and Gregory XII. (abdicated in 1415) and the antipopes Alexander V. († 1410) and John XXIII. (discontinued May 1415). Under the latter he was promoted to apostolic secretary.

Poggio took part in the Council of Constance , where he witnessed the heresy trial against Jerome of Prague , which ended with his condemnation and execution. He reported on this event in a moving letter to Leonardo Bruni. Contrary to popular but wrong opinion, Poggio did not write a book about the conviction of Jan Hus . Richard G. Salomon proved that the much-cited text, which appeared for the first time in the Stuttgart City Bell , which is known for its forgeries , is a forgery.

The council dragged on for years - from November 5, 1414 to April 22, 1418 - and Poggio was after the dismissal of his employer Johannes XXIII in Constance. without employment. He therefore used the time to search libraries and monasteries in Germany and France for ancient texts, the existence of which was known to the early humanists, but which could no longer be found in Italy. He discovered long-lost texts by Cicero , Tacitus , Quintilian , Vegetius , Marcus Manilius , Ammianus Marcellinus , Vitruv , Caecilius Statius , Lucretius and Petronius . In addition, Poggio specialized in assigning individual fragments to a specific author based on the writing style and thus reconstructing lost works.

Poggio spent the years 1418-1422 in England at the invitation of Bishop Henry Beaufort , but was not happy there. In February 1423 he returned to Rome and from May worked again in his previous position as apostolic secretary for the Curia, first under Pope Martin V (until 1431), then under Eugene IV (1431–1447) and finally under Nicholas V . From June 1453 to 1458 he was head of the Florentine firm under the Medici .

Like many humanists of his time, Poggio wrote exclusively in Latin and also translated Greek works into this language. He left an extensive correspondence of private and political content and wrote a history of the city of Florence.

Contribution to the development of humanistic writing 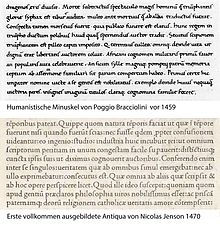 Poggio Bracciolini's many years of activity as an apostolic secretary and as an obsessive copyist of ancient literature was always associated with an aesthetically demanding design of documents of all kinds. This contributed to the further development of his font. In this context, Poggio continued the efforts started by Petrarch and Salutati to develop clear, legible writing. On the basis of the Carolingian minuscule , the littera antiqua, a special form of the humanistic minuscule emerged as an alternative to the Gothic book script . Not only did this better meet the requirements for clarity and readability, but it was also characterized by its balanced style and elegance. The tract De verecundia (“On Shame”) by Salutati is considered the oldest surviving written example from Poggio . It was created between 1402 and November 1403.

During his stay in Rome, Poggio studied the Roman inscriptions intensively . Their types of writing ( Capitalis monumentalis ) increasingly found their way into the design of his handwritten book pages and manuscripts in humanistic minuscule as a distinctive font . His writing was not only exemplary for his contemporaries. A short time later, this version of humanistic script served as a model for the first printing type, in which the alphabet of capital letters (Capitalis monumentalis) was combined with the alphabet of lowercase letters (humanistic minuscule) to form the roman . Poggio's script not only promoted a fundamental change from the broken Gothic script to the rounded Latin form of the book script, but also created elementary prerequisites for the development of uppercase and lowercase letters.

Conrad Ferdinand Meyer made Poggio the main character of his novella Plautus im Nonnenkloster , the first version of which appeared in 1881 under the title Das Brigittchen von Trogen and which the author himself considered to be one of his rather insignificant works. In it, Poggio, broken by the historicist relativism of the late 19th century, appears as an almost tragic figure, as a skeptic who has no other than aesthetic values ​​and yet suspects that the foundation of human society is being undermined: “' And '- he sighed -' I am reluctant to return to those youthfulnesses, now that the impartiality of my standpoints and the indolence of my view of life in my son - I do not know what uncanny law of heightening - I degenerate into unbearable impudence, even nefariousness see. '"

The novelists Monaldi & Sorti let Poggio appear as a dubious background figure in their history thriller The Mystery of Time . They bring him in connection with forger gangs, who at the time of the Renaissance created numerous texts that were purportedly ancient. The plot of the novel refers to the scientifically untenable conspiracy-theoretical chronology criticism , according to which parts of ancient history were invented by such forgers.

In the historical novel In nomine diaboli by Monika Küble and Henry Gerlach, Poggio wrote letters to his friend Niccolò Niccoli. He helps solve various murder cases during the Council of Constance.

The 2011 book by American author Stephen Greenblatt Die Wende: How the Renaissance Began is about the rediscovery of the masterpiece De rerum natura by the ancient poet Lucretius by Poggio Bracciolini in 1417. The author tells and explains how the discovery of this ancient work was in a German monastery had a strong impact on the development of intellectual history at that time. The extremely modern and free-spirited seeming ideas of Lucretius about elementary questions about the nature of things, matter, but also about the meaningful and pleasurable human life, allows Greenblatt to collide with the medieval, darkly drawn world. It was only the rediscovery by Bracciolini that helped the ancient work in the Renaissance to its real intellectual historical significance and effectiveness as an essential impulse for modernity. 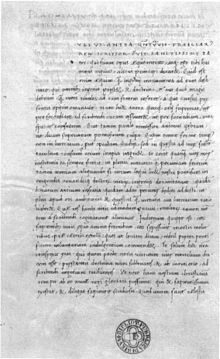 Translations from the Greek

Poggio as a literary figure